THE WORLD IS BEAUTIFUL BUT YOU ARE
NOT IN IT

Let me refer to myself in glorious ways:
colors seem brighter, the sky is a shocking blue.

I carry my stomach in this bowl
and earth is planted in my blood.

From your last letter, I gather hills.
I’m trying to keep my tenderness in check.

Trying to see what kind of grill the neighbors have
is everything I couldn’t do before.

Now brown eggs shift heavy in my palms, this bowl.
Words make their way up my thigh.

Let’s be honest: I need a real man, I say out loud.
Every weakness I have settles into a tree trunk,

stays all winter. I don’t know if I mean it.
Winter has lasted five years already.

This morning I press into the edges of my stomach.
My mother makes coffee in California.

Ladies will say we are expert with machines
but they will be two bottles under sangria.

I said you could make music out of this.
Ingesting artificial palm trees, exploding.

Your letters are getting shorter. I am getting close
enough to the sun to touch the tip of its cigar.

We carry what is shocking and heavy in blood.
Music seems brighter: the sky the sky. (Morgan Parker) 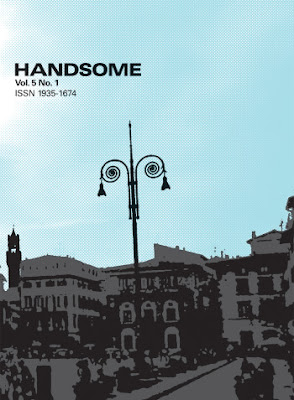 After a short wait, I finally received my contributor copy of the fifth annual HANDSOME journal, produced by Black Ocean. Launched recently at AWP in Boston, this issue contains one hundred and twenty pages of strong writing, most by writers I haven’t previously heard of. I’m slowly and still working my way through learning the names and writing of contemporary American poets, but there are still only two that haunt the pages of this new issue, being Deborah Poe [author of a recent chapbook through above/ground press] and Brian Henry. A graceful journal of new poetry, HANDSOME is edited by Paige Ackerson-Kiely and Allison Titus, and published by Janaka Stucky. Another of a series of journals who publish work sans author biography, I’m left with the work itself, immediately struck by the work of Morgan Parker, Kristina Marie Darling and Sarah Goldstein. There is something of Jenny Boully’s The Body: An Essay (Slope Editions, 2002) to Kristina Marie Darling’s poem, in that the footnote quickly overtakes the body of the poem. Sarah Goldstein’s pieces in this issue are a small handful of “untitled” prose-poems, wrapping a rather straightforward lyric story with just a hint of something more, something surreal, akin to Miranda July or Lydia Davis. She says just enough in each piece, but there is so much more beneath the surface; suggested, but still hidden.

The woman in the house down the road, whose phone bill you accidentally received and ripped open, fills her doorway, out of which wafts the dark smell of potpourri. You’ve seen her in the branches of the furious thickets between your houses calling her dog, thrashing like a shark in a net. You talk about the neighborhood squirrels: the big one with deep cuts on its shoulder, and the other one that made it through the winter without any fur. Large white cat in the window, large yellow dog pushing and whining behind her. “Oh, you’re so bad, you’re so bad,” she says to him. The dog always runs to you when he sees you, snapping the leash out of her hand, shoving his desperate head into your belly.

Some other pieces that struck include Jenny Drai’s poem “DER ABFLUG,” as well as Audrey Walls’ striking poem “Aquaphobia,” which ends with the lines: “You could drown in two inches // of water, my mother once warned. All you need / is someone to hold you under.” Kerri Webster has four poems in the new issue, each with the title “DIADEM,” and I wonder if these are a stand-alone quartet, or, like Noah Eli Gordon’s The Source (New York NY: Futurepoem Books, 2011), part of something much larger? I would like to see more.

Jupiter is fucking with me. What I know
of cruelty: a world is made
we did not ask for. In the dark, boys
set the dog on fire, let it loose
in the field. What
do you believe? Chanting what
as you go to sleep? I
see: same trees. Same locust
blossoms. I walk and walk. Smoke
from the burning scrapwood
shuts my eyes.