It began with a walk in the woods.
The weather became us.

We came to find the owls
who became trees.

Feathers whitened
the corners of our room

which became our winter habits.
So we invented songs

which became the animals
who abided unseen

in a house that reason left
every time we travelled

into ourselves. When we awoke
our arms were crossed

Only the movies delivered us
from a winter of no color.

the world was good or bad
because it was only both.

This is why
we followed the animals

and the animals
followed us back. 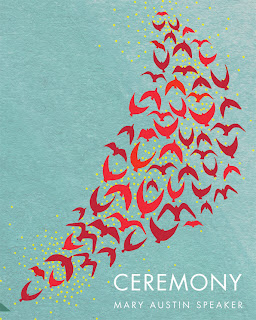 Introduced by Matthea Harvey, Iowa City poet Mary Austin Speaker’s first trade poetry collection, Ceremony (Slope, 2013), is an exploration of celebration and ritual, and the poetics of physical and metaphysical space. Opening with short couplets of endless variety and smallness, Speaker’s poems are built through the accrual of phrases, such as the poem “The Talking that Places Make,” that begins: “As awkwardly as / always this city // will grow / after I and everyone // leave it / get taller.” Each poem exists nearly as an endless, single threaded line, broken up into phrases for the possibilities of further meanings to enter. The book is structured in four sections: “The Field of Unspeakable Color,” “To Inhabit,” “You Can Have It All” and “Numerousness.” The short phrase-lines of the poems in the second section, the twenty-part section/sequence “To Inhabit,” is reminiscent of the smallness of Robert Creeley’s poems, sans the stanza breaks. Each section flows with the stagger and slight interruption of line breaks, but without pause, and intrigue for how they might be read aloud—with a regulated slowness or a rushing speed? The first poem in the sequence reads:

Even with stanza breaks, such as the poems in the other sections, there is an urgency to Speaker’s lines, her poem-sentences pushing deeper into her dreamy wisdom. In her introduction, Harvey writes:

How to talk about a book that delves into mystery head-on? Maybe by tacking how it bewilders (indeed, there is a poem titled “Bewilderment.”) Speaker’s short, sometimes unpunctuated lines allow you to track her myriad transformations, thing we couldn’t see without the poet’s magnifying glass: “this too / is exhaling: particles moving off / in their tiny boats, violet and charged // toward each pole…” Her lyrics revel in the personification of the natural world (trees have wrists “whitened with wind”) and words (“a flood of yes”), but also the reverse: “Our fingers grew restless // and skittered over tabletops, like mice.”
[…]
Speaker’s work offers so many delights—tiny tide pools of rhyme, the abstract made concrete, the concrete made uncertain. In “Origin Story” she writes, “Dreaming became us,” and the doubled nature of that statement is exactly what this book enacts. We enjoy how dreaming makes us look, but also how it makes us look.