Noah Eli Gordon, The Year of the Rooster


OBLITERATING HISTORY IN THE PLEASURE OF HOLDING FORTH

A first line is reason enough for a second, for a segment, unisexual & solitary as an organ. Our doctor operates a mechanism & calls it anatomy. Our dancer operates in music, which is the same. Whorled, lance-shaped leaves smear the window. Windy instrument, windy agency. Active principles everywhere

charging inertia. Syntactic propositions rest a harmonious unified totality on a reupholstered couch. Smash the shell to bits & hear the ocean in this lime. 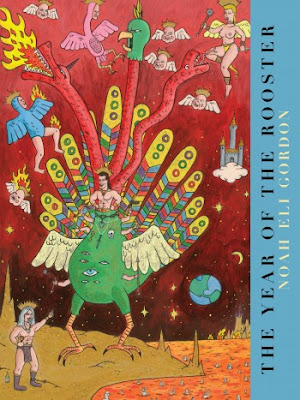 As the author tells us in the book’s acknowledgments, the poems in Noah Eli Gordon’s The Year of the Rooster (Boise ID: Ahsahta Press, 2013) were “composed and revised between 2004 and 2012.” Composed with bookending prose-poems sections, the core of the collection is the seventy-one page collage-poem “The Year of the Rooster,” named for the tenth of a twelve-year cycle of animals in the Chinese zodiac, alongside a shorter piece, the sprawling twelve-page “The Next Year: Did You Drop This Word.” Through the four sections, the collection works from precision to collage to excess to precision.

Merged with a cycle of five elements, the most recent cycle of the Chinese Year of the Rooster, February 9, 2005 – January 28, 2006, was known as the “wood rooster.” Those born during the Year of the Rooster are said to be brave, romantic, motivated, proud, blunt, resentful and boastful. The title section that centres Gordon’s newest poetry collection is composed as part dream, part admonition and part letter, with some sections written as a series of journal entries, directed at “Roo,” as though attempting a map in which to find direction. Some parts are even written as a series of chants, citing repeating rhythms and phrases, making parts of this collection as much for the ear as for the eye. Composed in so many directions, the title section writes across an enormously large canvas, one contained only by the bookended prose sections, holding together what otherwise might be unwieldy.

What a rooster is
stubborn alienation
fertile adornment
a common weather vane’s
most compatible match
steady indication
of which way
winds are blowing
distinctive double squawk
muffled wing beats
O my lord, revered priest, devotee
brave shame brooding
all my erect ones
how many kids
equal a kingdom
not present
a hen takes the role
stops laying
& begins to crow
O my lord, revered priest, devotee
what a rooster is
blah, blah, blah, the body

There are elements of Gordon’s previous works that explore the emergence of patterns and repetition, such as his poetry collection The Source (New York NY: Futurepoem Books, 2011) and current work-in-progress, “The Problem,” both of which are constructed out of poems each with the same title. Through the repetitions emerge the small differences, the distinctions akin to a series of daily photographs taken from the same spot. In The Year of the Rooster, the repetitions aren’t so obvious, but the poem wraps around a central core, a centre, the foundational image of the Year, the “Roo,” and the polyphonic nature of multiple voices, of which the author is but one: “You & Roo’s collaborative poem / on the ills of capital / You & Roo’s condemnation of nudity / with all clothes removed // Blah, blah, blah… the body, etcetera” (p 45).

You have something to say, why not say it?

Ice on the lake

Did you mean lacking?

I’m not talking I am

After details, everything quaking
A history (if that’s the word) being opened
You don’t share a house you share
rooms, feathers, an even memory’s wake-up call

It’s stagnant
but the Rooster’s a trope, regal
without subordination & attendant baggage

Even wasps have feathers

Everything skinny is ominous