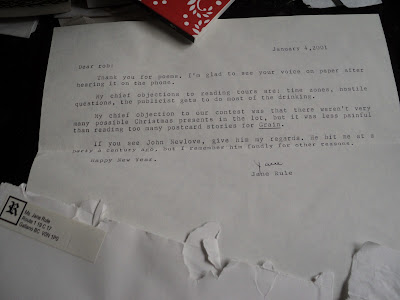 While digging through boxes to prepare further archive for the University of Calgary, I found this note from the late Jane Rule, with the best line about John Newlove: "He bit me at a party a century ago, but I remember him fondly for other reasons." She and I judged a first book competition for the Saskatchewan Writers Guild in 1999, the timing of which meant I was touring, and ended up calling her from various bars all over Alberta. She was horrified on my behalf at the thought of anyone touring, and nearly didn't believe me when I told her it was even my idea.

In other news, we’re gearing up for the spring edition of the ottawa small press book fair, and the pre-fair reading the night before, happening June 14 and 15, 2013. And don’t forget WESTfest the weekend before, where I’m even performing on the main stage (if you can believe it), as a tenth anniversary WESTfest special. Is there anything else I need to mention?

Zurich, Switzerland: As part of her participation in the 2013 dusie kollektiv [see the above/ground press publications by myself and Kaia Sand here, for same] as part of this year’s AWP, Kansas poet Megan Kaminski [see her Tuesday poem here; see her 12 or 20 question here] produced This Place (dusie, 2013). The poems in this small chapbook (with one of the loveliest covers I’ve seen on a chapbook in quite some time, done and designed by Lauren Schimming) works an exploration of geographies, both physical and sensual, writing poems such as “Arrival (warm and damp),” “This Place,” “Driving” and the extended travel-poem “Classified.”

The poems in this small collection are constructed around physicality, managing abstract and concrete foundations in each, held down enough so as not to free-float away.

Montreal QC: Where have all the student journals disappeared to? It’s been, admittedly, a number of years since I picked up a copy of Scrivener creative review, produced through the Department of English Students’ Association and the Arts Undergraduate Society at McGill University. Originally founded in 1980, the new issue of Scrivener, issue number thirty-eight, features an intriguing interview with Toronto writer Sheila Heti. Conducted by fiction editors Julie Mannell and Gavin Thomson, the interview focuses on Heti’s third novel, How Should a Person Be (2010) [see my review of such here; see another recent interviewwith Heti on same here]:

JM: I also found the critique very gendered. In the article I’m working on for The Huffington Post I sort of draw parallels between some of the criticism you received along with the criticism Lena Dunham received, along with the criticism that even people like Roseanne [Barr] have received: If men talk about art, there’s a seriousness to it, but when women talk about it, it’s flighty and it’s frivolous and it seems as though almost no women has the right to speak about art or even art for women.

SH: Well, I don’t think there’s anything frivolous to talk about if you’re writing a book. Like I was just reading Jane Austen and she’s considered one of the greatest English writers and it’s all about gossip and who that men in going to choose and if you think life is frivolous, then, you know.

The interview is illuminating, slightly scattered, and endearing in part for its honest questioning, as the two interviews attempt to understand Heti’s perspective on life and writing. There were some interesting pieces of fiction and fantastic artworks by Stefanie Kuzmiski, Mary McCulloch and Amy Goh, but another highlight of the issue was the poem, “from News of Andrea,” a somewhat uneven collaborative sequence with intriguing lines by Eliot D’Silva and Nausicaa Renner. Despite the unevenness, the poem intrigues.
Posted by rob mclennan at 9:01 AM
Labels: dusie, Gavin Thomson, Jane Rule, Julie Mannell, Lauren Shimming, literary journals, Megan Kaminski, Scrivener creative review, Sheila Heti