I see colours as birds go.

my sparrow gaze lifts me up.

I don’t need much space, but I want it.

becoming is my extravagance.

It’s interesting to see Tuft (Toronto ON: BookThug, 2013), Vancouver poet Kim Minkus’ own love song to her city, existing almost as a counterpoint to the lyric of Daphne Marlatt’s Liquidities: Vancouver Poems Then and Now (Vancouver BC: Talonbooks, 2013) [see my review of such here]. It’s also worth noting the Paul Celan influence throughout, including the Celan quote that opens the collection, “here come the colours,” and the way the shapes and sounds of Minkus’ words twist and turn, “he pecks at words / and sneaks loamy garden terms into his breath” (“Bird”), an influence that has worked its way through a number of Canadian poets, notably the work of Mark Goldstein, another BookThug author.

The animals leave the shores of the river. lope down curbs. peer into gardens. their teeth gnash and sparkle in the reflecting pools of fluorescence. the creatures that live in their fur and between their toes tangle in the alleys. the city and the animals flourish – together. coyotes, skunks, raccoons – nightraiders lull the streets luminescence. when you see the animals you forget. the city translates. 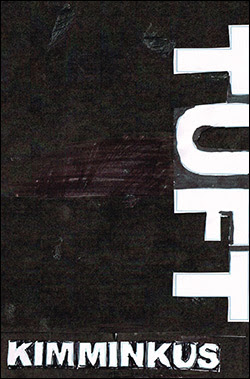 A former Ottawa resident, Minkus is also the author of two previous poetry collections 9 Freight (Vancouver BC: LINEbooks, 2008) and thresh (Montreal QC: Snare books, 2009) [see my review of such here]. Her Tuft is built out of an untitled opening sequence, and seven sections, each of which exist as a single poem-sequence: “Bird,” “TUFT,” “Laneway,” “Machine,” “24 Nonets Written After Reading Edward Byrne’s Sonnets: Louise Labé,” “Industry” and “Philomena.” Each section of the collection appears to focus on a different aspect of Vancouver, writing individual points on the Vancouver grid in an exploration of language and space. As she writes in the poem/section, “Machine,” “Take a ride through the machine of my city // each tower machine // waits for its moment,” later writing in the “Industry,” “random middles live in our cities // between difficult and capital // over that system as a whole // the best middles revert to agriculture[.]” Very much a poet aware of and responding to contemporary social justice, Minkus’ poems in Tuft explore the boundaries between written language and physical space, and personal versus consumer space, such as the clutter, debris and billboards of “Laneway,” or a literary Vancouver represented by Edward Byrne, and his Sonnets: Louise Labé (Nomados) [see my review of such here]. The twelfth of these “nonets” reads:

give me something whole
instead of grief an exit
silence – ecstasy

Hers might be a love song, but one that doesn’t shy away from the occasional critique, writing her way across the margins, whether the billboards of “Laneway,” or in “Industry,” where she writes “honest desire strains our escalated privileges[.]”

the form of the fact

instead of one warehouse artist

our gardeners are gods of war