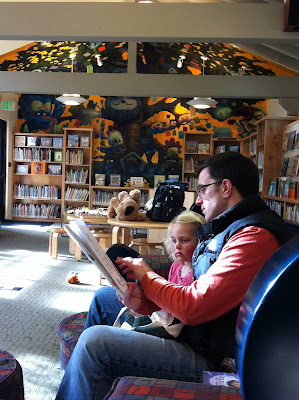 Dan Thomas-Glass is the author of The Great American Beatjack Volume I (Perfect Lovers Press), Kate & Sonia (in the months before our second daughter's birth) (Little Red Leaves' Textile Series), Seaming (Furniture Press), and 880 (Deep Oakland Editions). He works as a middle school teacher and administrator, and lives with his wife Kate and their daughters Sonia and Alma in California.

1 - How did your first book change your life? How does your most recent work compare to your previous? How does it feel different?
Well... I'm not sure I've published a book, exactly. I've published a photo-essay-poem on a freeway, a single-poem pamphlet, a textile chapbook, and a collection of record-poems. I'm hoping to publish an actual book-shaped collection soon. What I can say is that the process of writing and rewriting a book ms has been hugely informative: it has brought my attention, ideas, and investments into sharper focus.

2 - How did you come to poetry first, as opposed to, say, fiction or non-fiction?
Walt Whitman, more or less. In 10th grade we read various parts of Leaves of Grass and it exploded a lot of things for me. I started writing feverishly, in every shape and direction I could find. I was very spongy for a long time—I tried on vispo forms, performative work, narrative, just whatever. I've often worried that I'm too omnivorous, in that way. But lately I've stopped worrying, and just let myself write.

3 - How long does it take to start any particular writing project? Does your writing initially come quickly, or is it a slow process? Do first drafts appear looking close to their final shape, or does your work come out of copious notes?
I write a lot, and quickly. I revise a lot as well, but also quickly. I try to listen for language, then write what I hear. I'm very ear driven—a lot of the drafting process is about sound. And then the revision is often about form. Frequently I forget to think about content—about what I'm writing about. Usually I figure that out after the fact, or not at all.

It is also true that sometimes the form comes first, and those poems tend to have a different arc, and move more slowly. Some projects (like the Beatjack) are slower just because of the formal work of scanning poems and then writing into those stolen meters.

4 - Where does a poem usually begin for you? Are you an author of short pieces that end up combining into a larger project, or are you working on a "book" from the very beginning?
I don't work on a book, no. I write in seasons—I've had poems organized in files on my computer by season (Fall 2012, Winter 2013, Spring 2013, etc.) for about a decade. Those seasons often collate questions, experiences, explorations for me.

Lately poems begin with being a parent, and extend to what intrudes on daily life—anything from drones to economic collapse, occupy, television, music (a lot of music), work, dead loved ones, whatever.

5 - Are public readings part of or counter to your creative process? Are you the sort of writer who enjoys doing readings?
I like readings because they bring writing into a kind of social contact that is different from other less physical forms like email or facebook. That is often generative. I try and bring my daughters, but often the time doesn't work—they're usually in bed by 8pm.

6 - Do you have any theoretical concerns behind your writing? What kinds of questions are you trying to answer with your work? What do you even think the current questions are?
How to put the blooming optimism of being a parent to two brilliant & loving daughters into conversation with the crushing horror and enduring pessimism of contemporary life.

—and I believe that's true, or something I'm working toward, too.

7 – What do you see the current role of the writer being in larger culture? Does s/he even have one? What do you think the role of the writer should be?
To love people, to help people, to make life better than it is, to find meaning, to care without shame, to seek the edges of systems, to slow down and observe, to be honest, to connect with ancestors and long histories, to create ritual, to imagine other possible worlds.

8 - Do you find the process of working with an outside editor difficult or essential (or both)?
When I list the editors who have helped bring my projects into the world, I am embarrassed at the riches I have enjoyed: Stephanie Young, Christophe Casamassima, Ash Smith and Dawn Pendergast, and Dana Ward. Essential doesn't even begin to touch their importance to my ongoing thinking.

9 - What is the best piece of advice you've heard (not necessarily given to you directly)?
Not exactly advice because it isn't written in the command form, but this quote is on our refrigerator (typed by my mom some once upon a time on an index card)—

"A hundred times every day I remind myself that my inner and outer life depends on the labors of other men, living and dead, and that I must exert myself in order to give in the measure as I have received and am still receiving." Albert Einstein. That is the short version the internet here at work is offering me. The longer version, on our fridge, includes being drawn to the simple life, and notes that class difference is fundamentally based on violence.

10 - How easy has it been for you to move between genres (poetry to critical prose)? What do you see as the appeal?
They are in different places in my brain. I write a lot in many forms for work and life—those are all often similar, and poetry is distinct from them in that it leads me more than I lead it.

11 - What kind of writing routine do you tend to keep, or do you even have one? How does a typical day (for you) begin?
My day begins when either Sonia or Alma wakes up. Sonia usually yells for me, and Alma usually yells for Kate. We make coffee, eat, get dressed. Go to work. Sometimes when I bike to work I hear poems. Sometimes I write them down when I arrive. But being a writer who is also a parent and with a very full-time job that is not about writing per se, my routines are not centered on writing. I write when I can steal the time to write.

12 - When your writing gets stalled, where do you turn or return for (for lack of a better word) inspiration?
Some seasons and some years I write more than others. I've never worried about stalling.

13 - What fragrance reminds you of home?
Jasmine, ocean, eucalyptus, that big-street smell of lots of cars and corner stores.

14 - David W. McFadden once said that books come from books, but are there any other forms that influence your work, whether nature, music, science or visual art?
Music. Lots of music. But pretty much anything. I read a lot, and most of what I read influences what I write in some way or another.

15 - What other writers or writings are important for your work, or simply your life outside of your work?
Dana Ward's prose turn in his poetry since Typing Wild Speech has been hugely important for me. Brenda Hillman's poetry, its attention to landscape. Roberto Bolano's playfulness in history. Ash Smith and Anne Boyer's recent writing and thinking about domesticity and parenting in poetry, some of which is about returning to Bernadette Mayer's work. There are so many, really—isn't that what being a writer is about, reading too much?

16 - What would you like to do that you haven't yet done?
Visit New Orleans.

17 - If you could pick any other occupation to attempt, what would it be? Or, alternately, what do you think you would have ended up doing had you not been a writer?
I love cooking Mexican food.

18 - What made you write, as opposed to doing something else?
I don't know. I was drawn to words, as far back as I can remember.

20 - What are you currently working on?
Books—Daughters of your century is a complete manuscript, and then there's another book about daughters.