David Antin and the word seedy

David and I were hired in 1968 for the first faculty of the art department of the University of California at San Diego. We shared an office. I loved David immediately, especially for little significant gestures like opening his mail during faculty meetings. David immediately understood what I was trying to do with my work. He got me my first gallery show in L.A. He advised me to go to New York and suggested people who might also get my work. He launched me.
I just re-read his seminal piece on Andy Warhol,” The Silver Tenement.” David is a delight to read. One follows a mind thinking. He doesn’t claim the truth and he writes clearly, like W.C. Williams, a favorite of mine and I suspect his. In the essay he uses the word “seedy”. It’s the first time I’ve ever encountered that word in art criticism. Perfect. (John Baldessari)

A journal I’ve heard of for a while, but hadn’t seen until now is Golden Handcuffs Review, edited by Lou Rowan out of Seattle, Washington. One of the highlights of the new issue of Golden Handcuffs Review includes a short interview by Kyle Schlesinger, “50+ Years of Burning Deck Press: An Interview with Keith and Rosmarie Waldrop.” Karl and Christy Siegler might have run Vancouver’sTalonbooks just past the forty year mark, and Simon Dardick at Montreal’s Vehicule Press must be coming up to the same, but a press run by the same people for more than five decades is astounding, especially considering the fact that the press is still producing magnificent books. I just wish the interview included with them here might have been longer. British publisher Shearsman Books has just released a book-length study of Rosmarie Waldrop’s work, Nikolai Duffy’s RelativeStrangeness – Reading Rosmarie Waldrop (2013), but a study on the press is certainly warranted also. Or perhaps it has already been done?

KS: Someone told me that you have a Heidelberg press. I thought it was a C&P? Could you tell me about your equipment? Do you still use the letterpress?

KW: We started out with a 8x10” C&P that we got secondhand in 190 when all the printers were disposing of platen presses. It was motor driven, but hand fed. Later we traded it for a C&P somewhat larger, with a 10x12” bed. Finally, when we wanted to print full-length books (which meant approximately sixty-four pages), we added a secondhand Heidelberg with a 10x15” bed and automatic feed. This must have been in 1964.
But in 1985, when we had just printed five books and drove the sheets to our bindery in New Hampshire we found that they, like all the other binderies, had automated, and could no longer bind our small two-up sheets. From then on binding our books would be handwork and forbiddingly expensive.
So we came into the computer age and how make files on the computer to be printed offset. 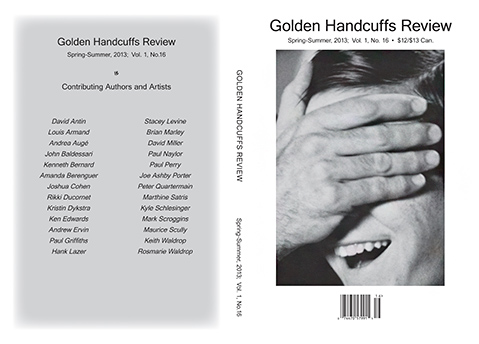 The strength of the journal appears to be a connecting of various disparate communities, including contributions by American writers alongside those by British and European writers. This was something Nate Dorward’s late-lamented journal, The Gig, was also very good at: connecting communities of innovative language poets and poetry readers in Canada, the United States and England. British writer David Miller’s introduction to the anthology The Alchemist’s Mind: a Book of Narrative Prose by Poets [see my review of the anthology here] is included, as is Vancouver critic Peter Quartermain’s essay “Discovery Making: Robert Duncan’s Life and Work 1958-1988,” a “lightly revised version” of the introduction to The Collected Later poems and Plays of Robert Duncan (University of California Press, 2012). There is something impressive about the range of attention the journal provides, allowing for a great deal of further reading. As far as the poetry submissions are concerned, the journal appears to favour longer pieces; not necessarily a home for the short lyric, but extended stretches, including new writing by Robert Kelly, David Antin, Jesse Glass and Hank Lazer, among others. The first eighteen sections of Paul Naylor’s “Anarchelogy” are included as well, an extended sequence of short, staggered lyric that include:

My daughter    her eyes
not yet ‘in the buyer’s light’

will she find beauty

instead of truth the lie
to see her through?

by thought       which wills
its own esteem fails

the parts reassemble
themselves as the new