We do treat books surprisingly lightly in contemporary culture. We’d never expect to understand a piece of music on one listen, but we tend to believe we’ve read a book after reading it just once. Books and music share more in terms of resonance than just a present-tense correlation of heard note to read word. Books need time to dawn on us, it takes time to understand what makes them, structurally, in thematic resonance, in afterthought, and always in correspondence with the books which came before them, because books are produced by books more than writers; they’re a result of all the books that went before them. Great books are adaptable; they alter with us as we alter in life, they renew themselves as we change and re-read them at different times in our lives. You can’t step into the same story twice—or maybe it’s that stories, books, art can’t step into the same person twice, maybe it’s that they allow for our mutability, are ready for us at all times, and maybe it’ this adaptability, regardless of time, that makes them art, because real art (as opposed to more transient art, which is real too, just for less time) will hold us at all our different ages like it held all the people before us and will hold all the people after us, in an elasticity and with a generosity that allow for all our comings and goings. Because come then go we will, and in that order. 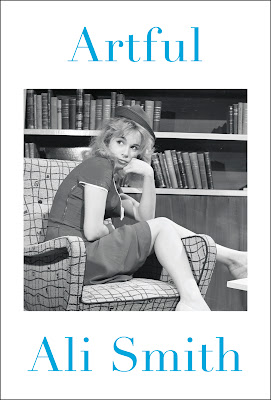 Originally produced “as four lectures given for the Weidenfeld Visiting Professorship in European Comparative Literature at St. Anne’s College, Oxford, in January and February 2012” is Scottish writer Ali Smith’s hybrid Artful (Penguin, 2013). Part novel and part essay, I always wonder when reading such magnificent books as these: how many hybrids must be produced before they are seen as their very own species? I think of works by W.G.Sebald, Michael Turner, or the prose of Susan Howe, for example. Hybrid works are less the exception; so why is there still such resistance?

Composed in four sections – “On time,” “On form,” “On edge” and “On offer and on reflection,” as well as the endnote “Some sources” – Artful moves through the story of a narrator in mourning, while going through her dead partner’s papers, from which much of the essay-thread of the book is built, a combination of the pieces themselves and the narrator’s own reading. Beyond that, the dead lover manages to reappear at her desk, speaking in a language that the narrator doesn’t understand, causing the narrator to rethink her own sanity. A book on loss and love and death, how does one return from the dead? Smith weaves brilliantly her fiction-as-lectures on grieving and the nature of storytelling and art, and the impossibly known and unknown.

I’ve only read two of her books previously, but there are shades here of the returned dead from Hotel World (2002), a book I admittedly had difficulty entering, and the reworkings of Ovid, as in her brilliant myth-retelling Girl Meets Boy (2007) [see my little note on such here]. The two sides of this work – a heartbreaking story of loss, grief and revitalization, and an exploration on literary creation – blend perfectly, neither side outweighing the other. Each lecture is patterned with an opening that leans more on the side of fiction, with three sections presented as papers (again, through the eyes of our grieving narrator). The essay-fiction form reminds me slightly of the essays of Alberta writer Aritha Van Herk, from whom we’ve heard so little of over the past decade or so. (A part of me tethers the two together, that she might be the ghost Ali Smith’s narrator speaks to, but I know this not to be true.) There is the series of through-lines that hold the entirety of the work together, the abstracts of her tangible arguments, the narrator’s evolution of grief, as well as Charles Dickens, both Oliver Twist and the musical Oliver!, the works of numerous poets and Greek, as language, histories and literatures.

How lost, how deeply felt these pieces are; how might they have been received as lectures? Oh, I write in my notebook, how I wish I could have been there in that lecture hall, three rows from the back, listening. I would have been happy, and mystified.
Posted by rob mclennan at 9:01 AM
Labels: Ali Smith, Aritha van Herk, Hamish Hamilton, Michael Turner, Penguin, Susan Howe, W.G. Sebald