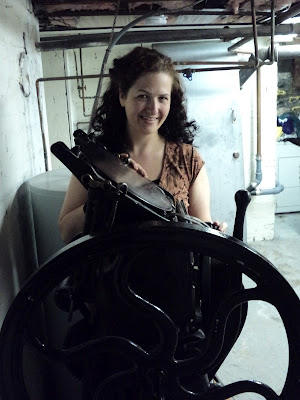 The days go on and on and on. Where does it all go?

We have a letterpress in our basement now (see left), a 750lb Golding Improved Pearl, c. 1897, that the delivery folk left in the driveway on Monday morning, and I helped the movers slip into the basement later that afternoon. Well, more precisely, my lovely fiancé, Christine, was given “on permanent loan” a letterpress from her former employers at Gaspereau Press that I now happen to also have access to. That’s enough, right? We’ve talked abstractly about doing a collaborative publishing enterprise for some time, something entirely different than what we have both been individually doing.

Plenty of links worth repeating, including this piece Vancouver poet Stephen Collis wrote on CWILA in Jacket 2, an interview with Jorie Graham in The Guardian, and a very cool interview with Phil Hall on the Walrus blog.

Ottawa small press book fair this weekend, with the pre-fair reading on Friday night. We will see you at both, yes? And our reading at Dusty Owl on July 15th? Called “the pre-wedding reading,”Christine and I both do individual sets, and then a set to introduce our ongoing collaborative project! above/ground press will even be producing a small selection of pieces from such for the event.

Toronto ON: It’s been many moons since I’ve seen an issue of BafterC (BookThug, 2012), and this issue, dated May 2012, Vol. 5 No. 1, was guest-edited by Stephen Cain, long a friend to both publisher and press. BookThug has made some incredible strides over the past couple of years, somehow picking up all the avant-garde slack that other publishers such as Coach House Books, ECW Press and Anansi (among others) have let slip away. This new issue includes an impressive array of new work by Adam Dickinson, Steve Venright, Clelia Scala, Pearl Pirie, Andy Weaver, Helen White, Marianne Apostolides, Peter Jaeger and Tim Conley.

The signs were certainly long there, but Toronto poet Andy Weaver has been making some interesting movements further into language writing over the last little bit. There are more than a few poets that seem to exist within an odd, nebulous realm that is neither lyric nor language but both, existing with one foot in either “camp,” and yet belonging to neither. I think, somehow, of Phil Hall, Judith Fitzgerald, Stan Rogal, Gil McElroy and even Stephen Cain, often, himself.

dear reader,
a nerd drew an awed werd,
drew a ward nervy and ravened,
revved dawn and yawned a
weary dawn away.

A year yawned and waned,
day wavered anew.
an aery raven weaned an warned
an ever wary deer.
Raw ear and eye
added a wry and rare
yarn. A darned
nerve ended
war, a vender wavered
and averred a dewy, wan
era. Rend a dead warren,
weave a dray, and weave
raw, weedy

There haven’t been many places where I’ve seen the work of Canadian expat Peter Jaeger in Canadian publications over the past few years, so I’m pleased to see something new by him, here. Given his decade or so living and teaching in England, much of his work, when it does appear, does so over there. But did you know he even has a forthcoming title with above/ground? The photographer Helen White has two images in this issue, two photographs of a paper man made out of sentences, written up out of fragments, depending on your perspective. I wouldn’t mind knowing the whole of the paper man’s sentence, but sometimes it takes years to know a body long enough to see even half the writing, there.

And the back cover, much as publisher Jay MillAr stated at the recent Toronto spring 2012 BookThug launch, includes a bold statement on the loss of McClelland and Stewart as a Canadian company:

So long M&S, thanks for all the hard work you did to build a Canadian Identity.

We’ll take it from here.

Minneapolis MN: Brian Teare, publisher of Albion Books, sent me a copy of his recent Paradise Was Typeset (DoubleCross Press, 2012), produced as the first of their “Poetics of the Handmade” series. As the back cover writes:

DoubleCross Press’s Poetics of the Handmade series publishes essays by contemporary hand-bookmakers and writers who engage with the handmade book as publishers, promoters, or curators. With an eye to the book’s past, the series seeks to illuminate the forms, connotations, and communities of the handmade book in the early 21st century micropress culture.
Fascinating to see such a series exist, and I could certainly recommend some Canadians that should be considered for such – Jason Dewinetz at Greenboathouse, first and foremost. And then, of course, derek beaulieu at NO Press, Cameron Anstee at Apt. 9 Press, jwcurry at Room 302 Books and Barry McKinnon at Gorse Press, for example. There are a whole slew of others, obviously (see my recent article on Canadian small/micro publishers,here). In Paradise Was Typeset, Teare opens with a story of a pilgrimage he did around 2001 to Serendipity Books in Berkeley, California:

Peter Howard was infamous for simply being difficult, but his particular grand of playful aggression was neither simple nor difficult for the sake of difficulty. In the same way that I had entered a store whose interior gave the appearance of un-interpretable chaos, but was in fact ordered and ultimately legible, so upon entering into a business transaction with Howard I had entered a value system whose precepts I would have to learn. Each of my visits culminated in some version of a Socratic dialogue in which he played an ironic, punishing Socrates and I a naïve, dim-witted interlocutor. After I’d learned the lesson he wished to impart, he would size up the books I had found, and each book would generate an annotation or anecdote of some kind, either about the author, the press, or its original owner.

Interspersed throughout are sections of the “12or 20 questions” I did with poet, publisher and editor Teare on his Albion Books (a press I would very recommend), and the essay works like a short collage, writing fragments around the interview questions and answers, morphing into a complex explanation of what and why and even how he is involved with small publishing. A fascinating title.

The second in the series will be Country Music, by Nathan Hauke and Kirsten Jorgenson.

Cambridge UK: I somehow came into possession of Reitha Pattison’s SOME FABLES (Cambridge UK: Grasp Press, 2011), a collection of twenty numbered short poems, sent by someone across the ocean in a generous package of British small press publications.

A reflection: dog dropped meat
into dog and meat and evil were
rewarded in cold fronts on level
markers of repast left in the dish
after lights out; nights strung about
in stern cosmetic aches. Provisions
were got in and some still starved.
Providence is one solid thing, tight
far-off agrarian work ethic another.

I’m fascinated by the graceful simplicity of the design, the graceful ease of the short yet complex poems writing out a set of fables both new and achingly familiar. These are fables for the young-not-young, somehow reminding me of a less twisted and dark version of the long-late-lamented Beautiful Stories for Ugly Children. If only our young weren’t so young as to appreciate these the way we do.

The nettle rests in two houses, the bind-
ing parts of travail; trust the wall not
to feel the bite. Accord. Saw mounted:
young hands choke on the hazel tears
in grasping what is painfully wanted
and needfully held fast by the neck
of form. To snap it, lattice defaults
never closing the bestiary in sight
of change, exculpates the moral.