I’d rather watch you doing it
than do it myself.
I’d rather hear about it.
I want to be told.
I’d rather read about it.
I’d rather just sit here.
Hold the mask over my face
while you do it to me.
I’ll put on some music.
Now see how we grow aglow
so young and beautiful
our capillaries all lit up. (“All Else Fails”)

I first became intrigued by American poet Deborah Landau and her second trade collection, The Last Usable Hour (Copper Canyon Press, 2011), when I discovered this post she wrote about one of her methods of composition for this collection:

A few years ago I was in a writing group with some amazing poets—Noelle Kocot, Dorothea Lasky, Anthony McCann, Damian Rogers, Matthew Rohrer, Richard Siken, and Matthew Zapruder. The idea was we’d each write a poem every day for a month, and we’d take turns giving writing prompts. All of this was done by email, and there was a great pressure to get a poem done and sent out by the end of each day—pressure which turned out to be extraordinarily helpful to me in generating a lot of new material. One day Richard Siken gave the following rather cryptic assignment:

Get a drink and put it in front of you.
Consider this:

If I gave you poison, would you drink it?
What if it made you stronger?

I’m not exactly sure how I ended up writing the poem I did from this prompt, but am grateful to Richard for provoking me to do so. The poem ended up in my most recent book, The Last Usable Hour—a series of linked sequences set in a midwinter, perpetually-nocturnal New York City—and sits in the apocalyptic final section, “Welcome to the Future.” 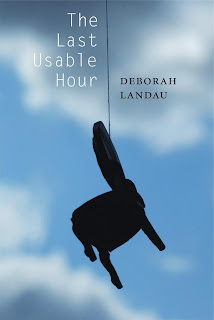 In The Last Usable Hour, Landau writes a single, extended line in her self-described “ghost book.” Broken into four lyric sections, her “linked lyric sequences” are composed as epistolary love poems, and as Pessoa (referenced within), can her unnamed narrator be a hetronym of sorts, writing out to someone she can’t quite name? Or does the someone not entirely matter? There’s an odd voyeurism to Landau’s depiction of midwinter New York, writing Larkin dreams and Pessoa, as in the first section, where she writes, “Don’t cry, don’t kiss me either, and also don’t stop. / That’s the way he looks when he wants to watch.” Her poems twist and turn, shift the gaze and just who is watching whom, a last desperate hour that holds the uncertainty of the narrator into a plausible strength. Dear someone, she writes, and it almost doesn’t matter whom. Or does it?