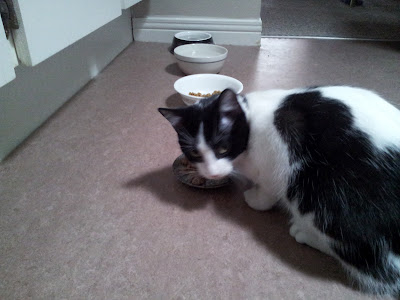 How does it get to June, already? It’s been a frenzied period of activity, with Christine’s launch recently in Toronto as part of the big spring BookThug event (she launches in Ottawa as part of The TREE Reading Series). And of course, our recent jaunts to New Orleans and the Niagara Region. All of this meant that we had to leave our Lemonade, lovingly cat-sat by Carmel Purkis (who took a series of photos, including this one, to appease us on our journeyings).

Stephen Brockwell is running a sizzling hot poetry workshop in Ottawa, coming up. And have you noticed the flurry of recent above/ground press activity lately? Also, this month includes a reading Christine McNair and I do together in St. Catharine’s,Ontario on Friday, June 15, the day before we sit with plenty of above/ground and Chaudiere titles (as well plenty of my own, and her new BookThug trade book) at a book fair, there, all part of the Niagara Literary Arts Festival. We both also read as part of a big event to closeoff a year-long “Call and Response” project over at the School of Photographic Arts on June 22, the day after our infamous SOCIAL, pre-wedding fun/draiser (you should really come by for this, it looks spectacular). And don’t forget,the end of the month has the semi-annual ottawa small press book fair, which I’ve been running twice a year since 1994, if you can believe it.

I don’t think I’m going to want to do anything else, once July finally comes.

Edmonton AB: I’m fascinated by the items Trisia Eddy has been producing on her recently-procured letterpress, a device previously owned by such worthy writers and producers as Elizabeth Bachinsky and Anik See (I’ve long been tempted to write a profile piece on the device itself, listing the range of publications produced upon it over the years by these three). In an edition of less than fifty copies, each bolted to a piece of reclaimed wood “treated with natural tung oil in the spring sun,” is ryan fitzpatrick’s 21st Century Monsters (Edmonton AB: Red Nettle Press, 2012). I’m intrigued in fitzpatrick’s movement into sentences, composing poems-as-prose much in the manner of other Canadian such as, say, Nicole Markotić, Jonathan Ball, Lisa Robertson and Jason Christie. There is something about the sentence, one might say. Each of these nine short poems read like short essays-in-couplets, nearly ghazal-like in the spaces left between. I am taken by the sparseness, the terseness, the broad strokes. There is much happening here, much more than he might even wish to let on.

Using this technique, two children can be
separated at birth without any emotions.

So why does the allegory survive while the
soulless creep is still walking the streets?

Near the tops of the trees, you can nearly
make out with the ice crystals in the branches.

Some might object to a woman carrying a
mystery child, but we need the freezer space.

So she knew about the safe haven, but would
rather shoot herself right in the stomach.

Generally, we find it is beneficial to the state
to allow individuals to disassemble themselves.

When I reach a finality near the ground will I
lose some of the individual momentum I’ve gained.

Some print outlets might bury ice storms deep
on the weather page choosing to focus differently.

These are striking and radical portraits of shot
leaders defying a Jacobin sense of liberty.

During the past decade, WalMart has begun to
profitably sell do-it-yourself exorcism kits.

Republicanism emerges as a nostalgic quest for
a return to the feudal times of purest liberty.

He was highly ethical in salvaging the tinkering
spirit of the wacky antics of embryonic cells.

Switzerland: After years of small-edition chapbooks comes HERSO, An Heirship in Waves (Black Radish Books, 2011), Dusie founder/editor/publisher Susana Gardner's second trade poetry collection. Constructed in seven sections, HERSO is a wild play, a language mix that comes apart in places, but is wild and evocative throughout. Gardner is exploring form, working around to see what fits, and just how far she can go, writing puns, sweeps and sound-parcels that accumulate into something much stronger than the sum of its parts. Gardner is an American poet who moved to Europe and founded dusie to keep a conversation going with those she left back at home. She feels very much like a poet at the near-beginning of a long path of intriguing formal exploration, a path I look forward to seeing further.