12 or 20 (small press) questions: Simone Fattal on The Post-Apollo Press 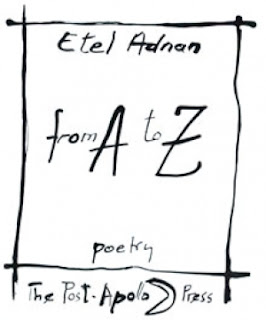 As Publisher Simone Fattal says on their website, "The Post-Apollo Press’ name came from the Apollo program that took man and women to the moon. This unreachable destination — the symbol of the sky — for it is the companion of the night, was made possible by the Apollo program. I thought at the time, the same way I think today, that for mankind to leave gravity and head for the universe, was the beginning of a new era. Therefore, we could count the years with the Post-Apollo, the way we did with BC and AD.

2012 is the thirtieth anniversary of the press."

1 - When did The Post-Apollo Press first start? How have your original goals as a publisher shifted since you started, if at all? And what have you learned through the process?
The Post-Apollo started in 1982. By pure chance. I started by doing a chapbook: From A To Z, as a gift to my partner Etel Adnan who had back trouble and was in bed. It was a poem I liked very much and it seemed to me that no one would be publishing this one poem any time soon. From A to Z had been written during the Three Mile Island nuclear accident, in 1981. We were in New York, and a photographer friend of Etel had been so shocked that he wanted to go to Three Mile Island , make photographs and asked Etel wether she would accompany him to conduct interviews with the people there about their reactions, their feelings ,experience and how they were living under the conditions, the threat, and so on. Etel decided against going, and  wrote a poem instead: From A To Z. Bobbie Del Tredicci, went and did the reportage and made a book. And this launched his career as an anti nuclear activist, going on to making books and pictures and interviews of the main protagonists of the nuclear bomb development. Etel wrote From A To Z. SO in order to make a book I had to already establish a Press, a name, a business licence, An ISBN, and learn how to make a book, most of all.I had no idea that I would be going on with this endeavour, and no goal, as such

2 – What first brought you to publishing?
I just said it in the first paragraph. But very soon after I learned how to make a book, a friend proposed to translate Sitt Marie-Rose also by Etel Adnan, from the French, a novel on the Civil War in Lebanon that had been published in France by the Editions des Femmes. And I heard myself say well if you translate it I will publish it. And so within 2 months I had already a novel and a chapbook, and so I had a publishing house! SO there I started having a goal which was to give these two titles, companions of the same quality ,only then would they be able to live and have importance. And so I proceeded to do just that.

3 – What do you consider the role and responsibilities, if any, of small publishing?
The same as the big publishing. My responsibility was immediately to proceed to getting distribution, and to continue producing books for only in the continuity I could insure the life of the books published.

4 – What do you see your press doing that no one else is?
I provided a place for some books that would have not existed without me. First the first two, and then quite a number of my titles had been refused by other Presses. And then I started the Small Contemporary Poetry Series, a format that gave full exposure to one singular poem .I think that move had been a real contribution to publishing.(see the article in Rain Taxi.)

5 – What do you see as the most effective way to get new books out into the world?
Just producing them, and giving them the same importance as to the bigger volumes. The look of my small series contributed to giving them this importance, the care and beauty that we put in every single one.

6 – How involved an editor are you? Do you dig deep into line edits, or do you prefer more of a light touch?
Very involved, I read very carefully and give advice, while always giving  precedence to respecting the author .

7 – How do your books get distributed? What are your usual print runs?
Print runs go from 500 for the smaller to a thousand  for poetry. My first run for Sitt Marie-Rose was 4000. The printer was shocked, he said it is a lot of books!! Actually I put what I thought were my last pennies into this printing, as my money came from Lebanon and Lebanon was under the Israeli invasion of 1982, (we were in the summer of 1982) and I thought that the situation there was hopeless. We reprinted 8 times, and reprinted a few poetry titles as well.

8 – How many other people are involved with editing or production? Do you work with other editors, and if so, how effective do you find it? What are the benefits, drawbacks?
I work mostly alone.

9 – How has being an editor/publisher changed the way you think about your own writing?
I am not a writer.


10 – How do you approach the idea of publishing your own writing? Some, such as Gary Geddes when he still ran Cormorant, refused such, yet various Coach House Press’ editors had titles during their tenures as editors for the press, including Victor Coleman and bp Nichol. What do you think of the arguments for or against, or do you see the whole question as irrelevant?
I published my translation from the French of Rumi And Sufism by Eva de Vitray Meyerovitch.I see no problem in publishing one's own work.

11 – How do you see The Post-Apollo Press evolving?
I would like to keep the same quality, and keep finding exciting work.


12– What, as a publisher, are you most proud of accomplishing?
What do you think people have overlooked about your publications? What is your biggest frustration?

People have been very supportive and have admired my press, ( which always come as a surprise and a big joy. The frustration comes when a bookstore refuses to take my book. I started going from bookstore to bookstore. They were usually very nice, but not always. I am very proud to have heard Barbara Guest read an homage to my publishing during the first reading of Quill, Solitary, Apparition. And also Lyn Hejinian say I was a great editor, and others.

13– Who were your early publishing models when starting out?
I had none, as I knew nothing about publishing, nor about America for that matter. I had arrived here in 1981!!I was new and just started without too much thinking.I had just met a young woman in NewYork who had a small Press, it had made me wonder…

14– How does The Post-Apollo Press work to engage with your immediate literary community, and community at large? What journals or presses do you see The Post-Apollo Press in dialogue with? How important do you see those dialogues, those conversations?
I go to readings, and organize readings for my authors, and book launches. I think readings and also institutions like Small Press Traffic, in San Francisco, and The Poetry Project in New York City, and all the Poetry Centers around the country helped create a poetry community which is very strong and a space where the authors and publishers alike can meet and talk. This is of the utmost importance.

15– Do you hold regular or occasional readings or launches? How important do you see public readings and other events?
Yes I do , and they are very important for people really buy books during readings.

16– How do you utilize the internet, if at all, to further your goals?
At the beginning not too much. The internet was something I could not understand... Now  of course I use it a lot, and I have an assistant who does not know there are other ways of looking for an information than the Internet. The Internet is something with which took me a while to get familiar with, i.e. my first instinct is to look for a reference, in a book , but it is coming slowly……..


17– Do you take submissions? If so, what aren’t you looking for?
Yes I did take submissions, I look for quality in writing, integrity, a voice who is a new and unique one, and not another text which would sound exactly as the previous one, and is the product od creative writing departments….

18– Tell me about three of your most recent titles, and why they’re special.
Well The Dihedrons Gazelle-Dihedrals Zoom by Leslie Scalapino. You have to open the first page to know how special it is, I had wished to publish a great prose work, and that was the one.

Seasons is a great poem, the first of a trilogy .But the other two have been published by Nightboat Books. And their title is Sea And Fog.