For the sake of the reading Christine McNair and I are doing in St. Catharine’s, Ontario tonight (and tabling tomorrow at the Virus Book Fair, with various above/ground press and Chaudiere titles, as well as my own titles and her own recent BookThug), Open Book: Ontario was good enough to post this "questionless" interview with me yesterday, and another with Christine, the day before. Thanks, Open Book!

After going through my list of twelve things folk might not know about me (only one of which Christine didn’t know, which I was a bit frustrated by), I thought of a few other bits I could add to the list. Am I just pushing myself to find bits that Christine might not have known? Possibly. 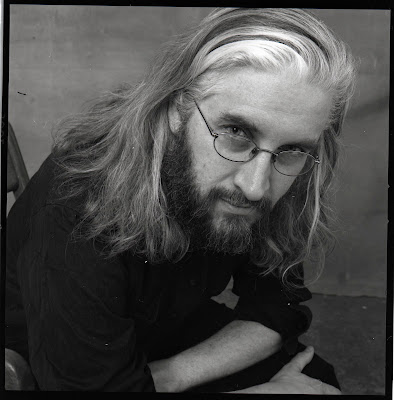 13. I have been the subject for a number of artists, photographers and illustrators over the years, whether formal or informal, nearly all of which I have been extremely pleased with, and many of which I’ve slipped onto the back covers of various chapbooks and books. Some of those who have drawn, painted or photographed me have included Dave Cooper, Diane Woodward, John W. MacDonald, Charles Earl, Tom Fowler, Heather Spears, Patrik Jandak [see my post on such here], Robin Kelsey, Jenn Farr, Pearl Pirie, Gavin McInnis, Rob Nelms (Emily Whist), David Cation, Robert McTavish, Christine McNair, Heather Gilberds [her 2010 portrait of me, left] and Greg Kerr (there might possibly be one or two others I can’t recall at the moment).

Poet and Bookninja George Murray even did a sketch of me, quickly, once, that I put on the back of a chapbook, somewhere around 1997. I am still hoping, possibly, someday, to be able to include Kate Beaton and Adrian Tomine, but perhaps those are pipe dreams. I am hoping someday to be able to collect all the pieces together in a single publication, perhaps. God only knows.

14. If I say that I situate myself somewhere between atheist and agnostic, it means I'm not sure what I don't believe.

15. I have a guitar in my possession (apparently) signed by the band Counting Crows. When Laurie Fuhr left Ottawa for the west over a decade back (she currently lives in Calgary, where she was, until recently, managing editor of filling Station magazine), she left it at my house for safekeeping. This is one of a series of guitars I’ve received from others, with my first in mid-teens from my cousin Patti (a Christmas present she received when I was pre-school age; it disappeared during a late 1990s break-in, resulting in Fuhr’s temporary offer of hers), a classical guitar from Stephen Brockwell, another from Marilyn Irwin, and a more recent acquisition (along with a lime green ukulele) from Sharon Harris.

It was years before Fuhr told me what the black marker scribbles on the face of her guitar meant, let alone by whom. When it finally gave up the ghost, I couldn’t throw it out, and even considered putting stamps upon, and shoving into a mailbox, just to see what might end up at her address in Calgary. I considered burying it in the woods, and photographing a small ceremony to send to her. Instead, it lives in our storage unit, waiting. Considering it isn’t mine to toss, how can I not keep it?

16. I can tell you from experience that being a Cub Scout when your ill-tempered mother is a Cub Leader is a terrible combination.