Three rivers why
Why & Me

Cell off please
This Great Hall

In his new chapbook Medallions of Belief (Toronto ON: BookThug, 2012), Vancouver poet and current Parliamentary Poet Laureate Fred Wah turns the response thread of his writing to the occasional, and collecting a small handful of occasional poems. As well as composing poems for a series of occasions, the chapbook was produced for one, a workshop Wah ran in Toronto this past March, as part of the Toronto New School of Writing, as the brief “Note” at the back of the publication reports:

Medallions of Belief is a chapbook configured on the occasion of a workshop for the Toronto New School Writing titled “How to Write a Poem for the Queen.” The poems are selected from past publications as well as unpublished and newer poems. The poem “The Snowflake Age” was written at the request of the House of Commons and the Senate for Queen Elizabeth’s Diamond Jubilee. […] This is a workshop on the Occasional Poem. Much maligned and frequently scorned by poet laureates, the poetics of the occasional poem invite an intriguing spectrum of considerations. Can a “poem in honour of” engage a similar discourse to the poem simply written “For”? And what sorts of intention function to generate the immense range of occasional poetry (W.H. Auden’s“Under Which Lyre: A Reactionary Tract for the Times,” Robert Creeley’s “So There,” bpNichol’s “Sketch For A Botanical Drawing For Thomas A. Clark,” Roy Miki’s “Nagasaki Day for Baco O,” or current British Poet Laureate Carol Ann Duffy’s poem “Rings” for the royal wedding last spring). 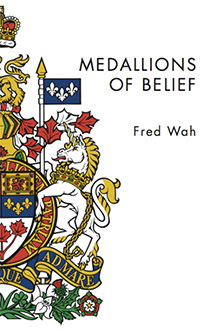 The question is an interesting one. George Bowering, as Canada’s first Parliamentary Poet Laureate, famously deflected all requests for poems but one, from a Little League baseball team, and a showcase of poems written upon request by laureates might not necessarily produce a showcase of worthy writing. In Medallions of Belief, Wah writes his occasions such as “IN THE MAIL WITH YOUR LETTER IS A / PACKAGE OF COUPONS” for Tom Wayman, and “PARAPOTIC SINK” for George Bowering (riffing off Bowering’s “Do Sink” and it’s own influence). One of the strengths in this collection of two dozen poems comes from the variety of movement, the variety of rhythms and forms throughout, in poems on the occasions of his daughters, a birthday, Queen Elizabeth II, travel, and even a couple of pieces from the ongoing “Music at the Heart of Thinking” series.

This whole collection seems to be built not only of occasions, but responses, prompting the question: is an occasion simply a trigger, and the poem of the occasion simply a response? One could argue that every poem is a response to something else, every piece of art a response, translating the world in whatever large or small way. One word responds to another word, one colour responds to the one that came before. Is this too simple, too easy? Is a poem for/from the Queen any different than one that responds to another poem? I am wishing I could have been at that workshop, or perhaps, Wah might write an essay of sorts to discuss the idea further. As Wah writes to begin his poem “The Snowflake Age”: “She said looking through the monarchy of pronouns / Her halftone face profiles the moment[.]”

and the origins grandparents countries placed converged
europe asia railroads carpenters nailed grain elevators
Swift Current my grandmother her house
he built on the street
and him his cafes namely the “Elite” on Center
looked straight ahead Saskatchewan points to it
Erickson Wah Trimble houses train station tracks
arrowed into downtown fine clay dirt prairies wind waiting
for Saskatchewan to appear for me again over the edge
horses led to the huge sky the weight and colour of it
over the mountains as if the mass owed me such appearance
against the hard edge of it sits on my forehead
as the most political place I know these places these strips
laid beyond horizon for eyesight the city so I won’t have to go
near it as origin town flatness appears later in my stomach why
why on earth would they land in such a place
mass of Pleistocene
sediment plate wedge
arrow sky beak horizon still waiting for that
I want it back, wait in this snowblown winter night
for that latitude of itself its own largeness
my body to get complete
it still owes me, it does