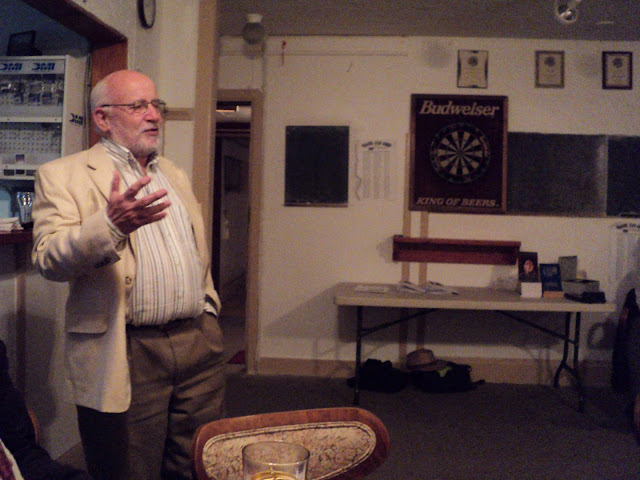 On Friday, June 1, 2012, we held a memorial reading for the late prairie poet Andrew Suknaski (1942-2012) at The Carleton Tavern [where we also held the Robert Kroetsch tribute, last spring], with readings, tributes and remembrances by Peter Gunther [pictured, left], Myrna Kostash (as read by myself), Monty Reid, Brenda Niskala, Dennis Gruending [below, reading from Wood Mountain Poems; see his piece on the event and Suknaski here] and kemeny babineau (as read by Christine McNair; babineau later slipped a copy of his poem into a bottle, and released it into the river, much the way Suknaski did the same in the 1960s and 70s). It was a fascinating mix of literary and personal, as Peter Gunther (who ended up at Mount Allison University around the same time as John Thompson) talked about working as a Bellhop with “Suk” in Deer Lake, Lake Louise, when they were still in their teens, to speaking to him on the phone as recently as a year ago. Monty Reid read from the Andrew Suknaski issue of The Dinosaur Review, a journal he edited and published many years ago out of Alberta, producing large sections of Suknaski’s otherwise-unpublished work-in-progress “Divining for West.”

A lot has been said about Andrew Suknaski the writer, and this event had much of that, but also included Andrew Suknaski the influence, the mentor, the friend and the human being. There was such a wealth of friendship and appreciation, despite the small group, and plenty of stories that lasted well after the official (informal) event. 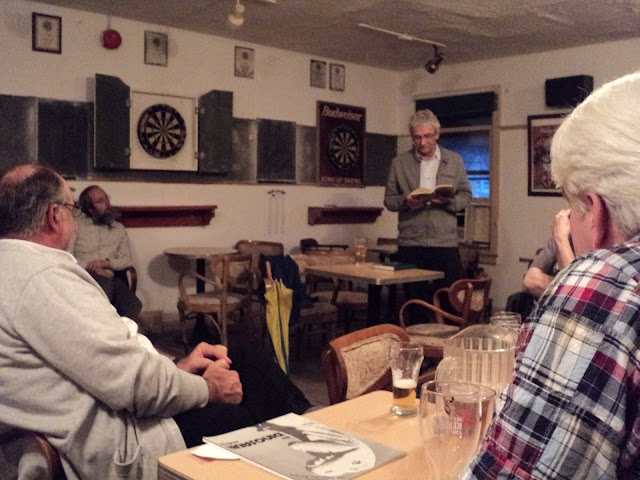 For my own small tribute, I spoke of my initial interests in Suknaski’s writing, a combination of being intrigued by writers who seem to disappear, and his combination of rejecting and reclaiming his home space, something I have long been able to identify with. I spoke of working on the selected poems (which, despite a signed contract by Suknaski, I am waiting to find out about the naming of a literary executor before going ahead), a selected essays and a collection of essays on his work. I produced a small handout of the essay I wrote on Suknaski’s work in 2005, which appeared on the Poetics.ca site (a site temporarily disappeared; we are working on such). The evening was impressive for its warmth, and its breadth. We even had a bookseller, from Collected Works Bookstore and Coffeebar, selling copies of the thirtieth anniversary edition of Wood Mountain Poems (2006) and Montage for an Interstellar Cry (1982). As Myrna Kostash’s small tribute read:

Andy was one of those prairie people and artist who showed me how to be one too. I had been away from homeplace for ten years when I returned to Alberta in 1975 to do the research for what would be All of Baba's Children - I'm still here - and along the way I met Andy, a regular visitor to Edmonton and to my quarter section near Two Hills. (He once stayed a few days at the shack, as I thought fondly of the log cabin, because he knew where the key was, and left me a poem written on a brown paper bag. And then wrote a poem about me and my .22: he seemed to like the idea of a Ukrainian-Canadian Cossack babe.)

Andy represented a series of revelations for me. He wrote/sang a kind of poetry that, now that I think of it, was also a form of creative nonfiction, the sort of thing that DJs would go on to do, "sampling" all kinds of music/texts, sourced from wherever his curiosity, imagination, memory bank and passion took him, in a polyphony of voices, and gave us all permission to do the same. He retrieved for western Canadian and Ukrainian-Canadian writing the narratives of settlers crushed by the very land that was meant to free them, and the narratives of the Aboriginal nations for whom that very earth/zemlya had been motherland. And he did all this with his own earthiness that made him seem a wise old man blown in from the steppes when he was still in his thirties.

Nice to hear that Andy is being celebrated around the country. I was in Moose Jaw for his memorial service there. You might be interested in my reflections of that event... on my blog: www.pjreece.ca/blog/wordpress