The purpose of this text was dutifully transcribed
with incomprehensible force
taken by the reader dilettante day-tripping
in another body’s funeral (“SCENE I.”)

Canadian poet Kate Eichhorn’s second trade poetry collection, FIELDNOTES, a forensic (Toronto ON: BookThug, 2010), works to dismantle not only a series of inquiry, but the nature of inquiry itself. Anthropology is rife with moral obligation, directives, warnings and miscomprehensions, and Eichhorn’s text explores the nature of exploration, attempting to dismantle biases. Is it possible to enter a new idea with a clean slate, or does one simply replace one’s initial biases with someone else’s?

Writing in the face of that data made me vulnerable. Cursed my uterus. Troubled, I became a client to a healer. A practitioner of sorts. We had varied and tentative identifications based on our shared status. (Perhaps I should leave it there? I’m departing the realm of rational conduct). There were insights, findings, magic, even specimens. Sorcery was used to label some of the photographs. The text we anticipated was entirely accurate. He already knew because presence is grounded on the fate of a tableau. On the contrary, I only contributed memories, interruptions, negative effects. (“SCENE II.”) 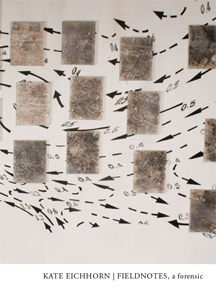 The poem moves through fragments, each accumulating as fieldnotes collected in six scenes, sculpted from suggestion of travel through not only foreign lands, but an entirely foreign landscape. Interspersed with fragments from the “Anthropologist,” a text set lighter than the main text, it is difficult to tell if this is meant to be a voice entirely separate from the narrator, but the movement itself suggests, perhaps, another point-of-view from the same nameless speaker, contradicting in places, and pushing to understand the differences in how to approach a foreign space, a foreign space, a foreign perspective.

The book investigates the question of how to learn about another (in a perspective that reads often like a foreign aid worker in a third world country) without damaging, interfering or judging, how to learn about another space without letting preconceptions stumble perceptions. The text speaks of the army, of corpses, of Ramadan, each leading to the suggestion of a specific, skimming notes across lengthy liner notes. One can become philosophical in such a landscape. The notes themselves suggest a narrative, but the story itself has been excised, erased, leaving only the investigation, and the lessons learned. That might be all the story requires.

6:45 am, Awake since 4
nestled in soil and undergrowth
all this taken in stride as stable personalities work the pit
another day of eyelashes
liquefying colour of cloth slings
maggots

This is the power of hair adhering in chunks
to skulls (“SCENE IV.”)

Posted by rob mclennan at 9:01 AM
Labels: BookThug, Kate Eichhorn