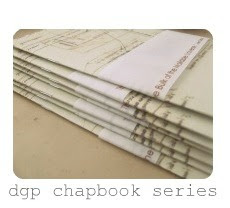 When did Dancing Girl Press first start? What first bought you to publishing? How have your original goals as a publisher shifted since you started, if at all? And what have you learned through the process?
Started in 2004, dancing girl press was a spin-off of the online journal I was editing at the time, wicked alice, which published women-focused work and was about three years old.  At the same time, I had developed an interest in book and paper arts, and was trying to combine them with the poetry-related things I was doing. The goal of both was pretty much to feature the work of women poets, particularly emerging authors who sometimes find it difficult to get a foot in.   I feel in many ways that we are helping foster a proliferation of women’s voices, which as the VIDA statistics reveal are underrepresented in contemporary publishing, in the general literary conversation.  On one hand, the whole endeavor was rather simple and DIY rooted to launch, but as it grows, more work than I ever would have imagined. But it’s good, fulfilling work.

What do you consider the role and responsibilities, if any, of small publishing?
I feel like small publishing is freer and more willing to take risks than bigger publishers.  With a small scale operation like ours, I have no problem taking on an interesting manuscript from a newish, unknown-as-yet poet that may or may not sell a single copy.  Obviously, the goal is to sell books if you want to survive, but I’m willing to risk it if I feel strongly enough about the work.  We’ve published some first chaps that are slow out of the gate, but as the author’s reputation grows, they start selling like hotcakes.  It’s nice to have that luxury to make decisions outside the finance driven paradigm of traditional publishers.

What do you see your press doing that no one else is?
There are a lot of presses out there that overlap with our goals, publishing chapbooks by women, innovative work, new authors.  We have a strong tie to the visual arts and paper crafts, since those are my other interests, so that shows up occasionally in projects that are more book arts driven and more unusual than just a saddle stapled chapbook.  We also probably publish a lot more books than a lot of presses of similar scale, mainly because I feel like the more work we issue, the greater the impact and scope.  I guess it’s sort of like a few drops versus a slow trickle of books making their way into the world, so I’m determined to take on as many projects as I find interesting and that we can afford.

What do you see as the most effective way to get new chapbooks out into the world? How do your chapbooks get distributed? What are your usual print runs?
dgp has sort of grown up along with the rise of social networking, first blogs, then things like myspace, facebook, twitter, all excellent ways of connecting writers and building communities. Our primary means of distribution is internet sales, so this online sense of community is absolutely necessary. A small percentage of our sales stem from readings, book fairs, and events, which I try to do as much as I can, at least locally.   With a few exceptions, most of our books have an open run, usually starting off with a large batch of about 50 and then in smaller batches as needed.

How involved an editor are you? Do you dig deep into line edits, or do you prefer more of a light touch?
I’m definitely more hands off on poems or ordering, since I only really take on work that I love already.  I was never really good at offering suggestions to other people about their work (I was the most frustrating person in my MFA workshop).  For me, it worked or it didn’t.   My suggestions are usually based around practical things like punctuation, capitalization, consistencies or inconsistencies of such, breaking lines to fit, things that come up during the layout process.

How many other people are involved with editing or production? Do you work with other editors, and if so, how effective do you find it? What are the benefits, drawbacks?
I occasionally pull in some help for assembling books during crunch times, and we sometimes solicit cover artwork/designs depending on the author’s desires, but otherwise, it’s solely me.  I’m a little bit of a control freak about it all, so I’m usually content to work alone to sustain that control. I sometimes feel like group endeavors suffer from “too many cooks in the kitchen” syndrome and it’s more counterproductive than helpful. The flipside is that I have to shoulder all the work myself, but for me, it’s worth it to not be tripping over anyone else.

How has being an editor/publisher changed the way you think about your own writing?
I feel like reading so many manuscripts and spending so much time among words and thinking about each project, has only been good for my own writing in terms of expanding my range and interests. I’m also humbled by the amazingness I see come across my desk sometimes.  I think as writers in a vacuum, we don’t always see the things we come up against for publication slots or awards, and it’s almost overwhelming to know the scope and breadth of what we’re competing against in those situations.

How do you approach the idea of publishing your own writing? Some, such as Gary Geddes when he still ran Cormorant, refused such, yet various Coach House Press’ editors had titles during their tenures as editors for the press, including Victor Coleman and bpNichol. What do you think of the arguments for or against, or do you see the whole question as irrelevant?
Coming from a DIY background, I feel like it’s a non-issue.  I think it’s easy to be self-indulgent as a publisher, and perhaps you should probably tread carefully.  But if you’re bringing your A-game and feel the need to get that book out there in the world, then I say go for it.  My trial run for dgp was my own chapbook since I wanted to make sure the whole endeavor was do-able before I involved another author.   I now quite regularly release my own little projects, be they visually oriented or text-oriented.  I love seeing an idea through from inception to completion and of course, being all control freaky about it.  I try to get some feedback on things before I put them out there to make sure I’m not just being self-indulgent and that it’s up to par (be that publishing pieces in journals, showing other friends/editors/etc.)

How do you see Dancing Girl Press evolving?
Right now, in terms of publishing schedule, we are at the point where it’s hard to get any larger or publish more titles.  My dream is that I could eventually quit my day job and do all this full-time, but it will probably be awhile.  For the time being, I’d like to do more book arts oriented sort of projects than we currently do.

What, as a publisher, are you most proud of accomplishing? What do you think people have overlooked about your publications? What is your biggest frustration?
I’m really proud that this whole thing has grown as large as it has and that people really seem to love the books we publish.  But do  I feel like sometimes people don’t quite get the very large scope of what we publish in terms of subject matter, style, etc.  I heard someone say once that “dgp only seems to publish X sort of work” which wasn’t true at all had that person actually read more than a couple of our titles.  That’s one reason I like our new little sale package, which is a mix of 5 randomly chosen books.  I think people are tempted to go with the authors they are friends with, the authors they are familiar with, but there is so much more going on that they’d like if they saw it.

Who were your early publishing models when starting out?
In the early 2000’s there were so many awesome micro-presses springing up, operations like Effing Press, Big Game Books, horseless press, all of which were doing similar things to what I wanted to do. New Michigan Press was another press that spun out of an online journal that was a model (they also later published one of my own books).

How does Dancing Girl Press work to engage with your immediate literary community, and community at large? What journals or presses do you see Dancing Girl Press in dialogue with? How important do you see those dialogues, those conversations? Do you hold regular or occasional readings or launches? How important do you see public readings and other events?
One of my secondary goals is to take on work by Chicago/Midwestern poets, which is always nice since we can have readings and signings and such (sometimes with other authors who happen to roll through town). Switchback Books, which was founded by my friends/classmates at Columbia a couple years after dgp, has a lot of overlap in authors and interests with what we publish, so we’ve done a lot of book fairs and readings with them and it’s been invaluable to have another press devoted to women’s writing coming of age at the same time.

How do you utilize the internet, if at all, to further your goals?
The internet has pretty much been absolutely central to the operation.  If I had started a press 20 years ago, it would have felt like an uphill battle to even get work to publish, let alone readers. As I mentioned earlier re: social networking, I feel like the poetry community is much more accessible to everyone, even if you live in the middle of nowhere with no other poets for miles.  Because of the internet, I was already getting to know other writers even before I started the press via listservs, discussion boards, blogs.  These were the poets who started sending work, buying books, spreading the word.  It’s only continued as that circle has grown larger.

Do you take submissions? If so, what aren’t you looking for?
Our publication list is a mix of manuscripts collected during our open reading periods and other solicited projects.  We are open every summer for submissions.  I could rattle off a list of things we’re not looking for, but then someone could send me something that turns all of it on its head and I’d take it.  The main thing I will immediately skip over though is the sort of poem that just feels like ordinary prose broken into lines without any attempt at doing, I guess, poetic things—things related to sound, rhythm, image, strangeness.  On the other hand, I usually love prose poems, just not prose broken arbitrarily into lines.

Tell me about three of your most recent titles, and why they’re special.
Sandra Faulkner’s Hello Kitty Goes to College is a strange meditation on pop culture consumerism, sexual politics, and academia.

Brenda Sieczkowski’s Wonder Girl in Monsterland, which includes images by artist Chad Woody, creates this surreal little world with talking bears and odd neighbors and strokes me as very Alice-like, which I love.  One of the best things a manuscript can do for me is create some sort of alternate world.

Emiliegh Barnes’ Given is a book of poems as mathematical equations. Despite my horror of actual math, I love this little book.