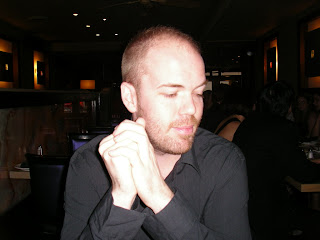 Tim Conley is Associate Professor of English and Comparative Literature at Brock University. His essays, fiction, poetry, and reviews have appeared in journals in six countries. He is the author of, most recently, Whatever Happens (Insomniac Press, 2006) and, with Stephen Cain, The Encyclopedia of Fictional and Fantastic Languages (Greenwood, 2006).

Every book has felt like it’s the first book. Exhilarating, disappointing.
2 - How did you come to poetry first, as opposed to, say, fiction or non-fiction?

Everybody comes to poetry first. It’s the most primal form. It gets gradually beaten out of you by prosaic institutions and systems.

3 - How long does it take to start any particular writing project? Does your writing intitially come quickly, or is it a slow process? Do first drafts appear looking close to their final shape, or does your work come out of copious notes?
The muse, she don’t sing when you threaten or cajole. The voices come in the middle of the night, sometimes first thing in the morning, in the shower, out for a long walk. Then it’s a matter of listening closely and trying to get to a notebook in time. I can’t generalize about the pacing of projects: some come bursting forth, others are staggered, coming in short spurts over weeks or months. For me, the trick is to be at work at a few projects at any one time, and they laterally feed into each other, somehow. It’s best if I don’t fully understand the process.

4 - Where does a poem or piece of fiction usually begin for you? Are you an author of short pieces that end up combining into a larger project, or are you working on a “book” from the very beginning?

I’ve done and do both; it depends on the project.
5 - Are public readings part of or counter to your creative process? Are you the sort of writer who enjoys doing readings?

My experience with readings is not wide enough for me to have settled opinions, but I suspect that such events have fairly little effect on my writing, at least so far. The act of reading aloud to an audience doesn’t allow for much meaningful dialogue. But if I’m asked to read, sure, I’ll try to give a decent show. I’m not at all against performance and recognize that it can provoke important interactions. The question is how you maximize those interactions. The lectern, the spotlight, the single microphone, the single reader – these arrangements don’t necessarily help.

6 - Do you have any theoretical concerns behind your writing? What kinds of questions are you trying to answer with your work? What do you even think the current questions are?
Do you know that great “questions” game in Rosencrantz and Guildenstern Are Dead? Have you ever played that?

My views on the responsibilities of the intellectual class are lengthy and unoriginal. In a nutshell, though: tell the truth (even if you must tell it slant).
8 - Do you find the process of working with an outside editor difficult or essential (or both)?

Not always essential, but when essential, usually both.
9 - What is the best piece of advice you’ve heard (not necessarily given to you directly)?

I wouldn’t, if I were you.
10 - How easy has it been for you to move between genres (poetry to fiction to critical prose)? What do you see as the appeal?

Not getting bored.
11 - What kind of writing routine do you tend to keep, or do you even have one? How does a typical day (for you) begin?

Usually I wake up. Then I write, when I can, without routine, though I’ve nothing against routines, some of my best friends have routines.
12 - When your writing gets stalled, where do you turn or return for (for lack of a better word) inspiration?
It depends on why it’s stalled. If I don’t know where it’s going, I’ll probably set it aside and turn to work on something else, or maybe read. If, on the other hand, it’s just despair settling in again, I might listen to a Spike Jones album and have my faith in humanity (partially) restored.

13 - If there was a fire, what’s the first thing you’d grab?
The fire extinguisher.

Absolutely.
15 - What other writers or writings are important for your work, or simply your life outside of your work?

There’s no way I can answer this – there are just too many.
16 - What would you like to do that you haven’t yet done?

Live the rest of my life. And maybe other lives, too.
17 - If you could pick any other occupation to attempt, what would it be? Or, alternately, what do you think you would have ended up doing had you not been a writer?

In high school, the predictions were cartoonist or mathematician. Still fond of both occupations, I can yet picture doing either, but I also think I would have made a pretty good radio DJ (no call for such things now).
18 - What made you write, as opposed to doing something else?

I finished a new manuscript a few weeks ago. But right now? Laundry. Honestly.
12 or 20 questions archive (second series);
Posted by rob mclennan at 10:02 AM
Labels: 12 or 20 questions, Insomniac Press, Tim Conley