12 or 20 questions: with Peter Norman 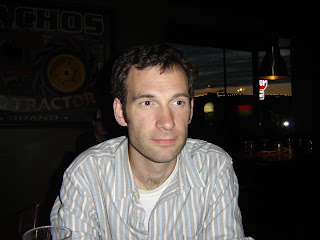 Peter Norman’s fiction, poetry and journalism have appeared in several periodicals, and he has been anthologized in The Best Canadian Poetry in English and Jailbreaks: 99 Canadian Sonnets. A native of Vancouver, Peter earned a Creative Writing degree at the University of British Columbia and now lives in Halifax. His first novel, Emberton, is forthcoming from Douglas & McIntyre.

1 - How did your first chapbook change your life? How does your most recent work compare to your previous? How does it feel different?
My first chapbook gave me a single, consolidated selection of work to show people. Choosing poems for it, I developed a keener sense of the strengths and shortcomings of my work. And, of course, it made me extravagantly wealthy. (One of these answers is false.)
Hard to say whether my recent work feels different, but I hope it’s an improvement on what came before. I think writers tend to prefer their newer stuff; reportedly Milton went to the grave believing Paradise Regained to be his masterpiece. This may be a useful coping mechanism. It must be really tough accept that your best work is long behind you.
2 - How did you come to poetry first, as opposed to, say, fiction or non-fiction?

Actually, I wrote fiction first: it was the earliest stuff I read, and therefore the earliest stuff I aped. Poems, though, were what I first published in a chapbook. I had written many more poems than stories, so it was easier to assemble a handful of half-decent ones.

3 - How long does it take to start any particular writing project? Does your writing intitially come quickly, or is it a slow process? Do first drafts appear looking close to their final shape, or does your work come out of copious notes?
Each project is its own creature. Some come fast and furious, requiring little preparation; others are painfully slow. Some change a great deal during rewrites; others pop out more or less intact.
4 - Where does a poem or piece of fiction usually begin for you? Are you an author of short pieces that end up combining into a larger project, or are you working on a "book" from the very beginning?
Anything can spark a piece, from the specific (a turn of phrase that sticks in the imagination) to the very general (a broad plot idea, or even a theme).
When it comes to collecting pieces into a book-length whole, that’s a problem for me. Each poem or story is written entirely on its own terms, with no regard for any kind of larger context. When I try assembling a bunch of these into a collection, I can’t seem to put together a coherent manuscript.
5 - Are public readings part of or counter to your creative process? Are you the sort of writer who enjoys doing readings?

I love reading. At times, it is part of my process: I’ll read something new, and if I lose the audience I know where to cut.

6 - Do you have any theoretical concerns behind your writing? What kinds of questions are you trying to answer with your work? What do you even think the current questions are?
I probably do have theoretical concerns, but thanks to my wilful ignorance of literary theory I don’t know quite what they are. I say “ignorance,” but that’s a bit coy: in fact I read a ton about how and why poems and stories get built. But I’m averse to confessing any sort of “theoretical” bent because so much sterile work seems to be produced in the name of theory.
I don’t know what the current questions are, but I suspect they differ very little from the eternal ones.
7 – What do you see the current role of the writer being in larger culture? Does s/he even have one? What do you think the role of the writer should be?
The writer’s first role, and first concern, should be to write well. To demonstrate and even expand the capabilities of language, narrative, verbal music. I’m sure there are “larger” roles, but they should arrive as by-products of mastering the work. Horse before the cart.
8 - Do you find the process of working with an outside editor difficult or essential (or both)?
If your editor’s capable, if you trust her, and if her priority is helping your work do what it needs to do, then you have an invaluable ally. If an editor’s incompetent and does not respect your work’s primary intentions, then you may have a problem.
I’m an editor myself, and I’ve observed a rough correlation between a writer’s talent and how receptive he is to editing. The worst writer (who, of course, needs the most help) resists every little suggestion; the best writer recognizes the value of a good edit, and is grateful.
9 - What is the best piece of advice you've heard (not necessarily given to you directly)?
“Never miss an opportunity to keep your mouth shut.” I wish I could follow it.
10 - How easy has it been for you to move between genres (poetry to fiction)? What do you see as the appeal?
The challenge isn’t moving between genres; it’s getting the motor started in either genre. Each, I find, requires its own rhythm and approach. If it’s been months since I wrote a fictional scene or a line of verse, it can be immensely difficult to start something new. Momentum is huge.
11 - What kind of writing routine do you tend to keep, or do you even have one? How does a typical day (for you) begin?
My life is too unpredictable to allow an ongoing routine. I make my living as a freelance writer and editor (so a project can come out of nowhere and swamp me for weeks) and I move around a lot (just drove from Calgary to PEI, pending a temporary settling-down in Halifax). Now and then I can chisel out a few months, usually thanks to a grant, in which some kind of writing routine prevails.
12 - When your writing gets stalled, where do you turn or return for (for lack of a better word) inspiration?
Deadlines. If I don’t have any professional deadlines, I have to set up my own. Another person, some kind of boss figure, has to be involved or I won’t take it seriously. For example, the writer James Moran and I are in the midst of our second Story Swap: we exchange stories at set deadlines; the other guy is supposed to act like a boss, giving you grief if you miss the deadline. We instigated these swaps several years ago, with the express purpose of kicking our butts into gear.
13 - What do you really want?
I want the Vancouver Canucks to win the Stanley Cup.
14 - David W. McFadden once said that books come from books, but are there any other forms that influence your work, whether nature, music, science or visual art?

Nature and science do have some influence, particularly bugs and entomology. Other art forms have an enormous influence too; I pretty much live by art. I’d say film is tops, followed by music. However, a great artwork has already found its ideal genre and will not benefit from translation into another, least of all by me. Some very good poems exist that respond specifically to paintings, movies etc., but I’m not interested in writing those myself. (It’s particularly irksome when a writer seems to want to show off how cultured he is.) So I’m not talking about direct, ostentatious allusion. When you’re steeped in art, its influence will seep into everything you create.

But when you get down to the grit of the matter—the language we use to convey our material, the way we use that language—then McFadden is right: books come from books. They come from the lines and passages and scenes that echo in the writer’s memory.
15 - What other writers or writings are important for your work, or simply your life outside of your work?
Loads. I don’t even know where to begin. It’s kind of pointless (and feels kind of pretentious) just to list names, but that’s about all I can do...
My top influences in poetry include Shakespeare, Stuart Ross, Elizabeth Bishop, John Donne, George Herbert, Simon Armitage, the King James Bible & Anglican Book of Common Prayer, Sylvia Plath, T.S. Eliot, W.B.Yeats, Karen Solie, Stephen Brockwell, Alexander Pope, Gerard Manley Hopkins, Spike Milligan, Ogden Nash, Margaret Avison, Christian Bök, John Keats, Ken Babstock, Seamus Heaney, Mark Jarman, Robert Frost, Ted Hughes, Peter Van Toorn. I’m sure I’m forgetting a ton.
Fiction: Kafka above all. P.G. Wodehouse, a supreme prose stylist. Douglas Adams, Dostoevsky, Borges, John Updike, Alice Munro, Flannery O’Connor, Zsuzsi Gartner, Don DeLillo, Italo Calvino, Joyce Carol Oates, George Saunders, Raymond Carver, Will Self, Mark Twain, Kazuo Ishiguro, John Fowles, Sara O’Leary, David Foster Wallace, Dickens, Atwood, Kingsley & Martin Amis, Stephen King, Edgar Allan Poe, Peter Carey, Carol Shields, James Joyce. And I have to give props to F.W. Dixon, Enid Blyton & Robert Arthur for ensuring I always had a book under my pillow in the tween years.
Life outside of work: again, loads of writers. Above all, my wife Melanie Little, a brilliant writer and editor. Most of my friends write, so of course they’re tremendously important. Certain writers, beyond influencing my work at the sentence-and-stanza level, have helped me move along the path: Stephen Brockwell, jw curry, Wayne Clifford. People like Lynn Coady and Stephanie Bolster and Zachariah Wells who put me in anthologies. People like Christian Bök and derek beaulieu who generously shared their insights and aesthetics, answering a novice’s questions and meeting his rebuttals. Teachers and classmates at UBC. You, who first published me in chapbook form. On and on goes the list... (And now I realize I’ve gone off topic. Books and writers that affected me-as-a-person-beyond-writing? That’s a giant list of its own.)
16 - What would you like to do that you haven't yet done?
Drive a police cruiser with lights & siren engaged.
17 - If you could pick any other occupation to attempt, what would it be? Or, alternately, what do you think you would have ended up doing had you not been a writer?
First question: probably a musician. I dearly envy them, performers and composers alike.
Second question: beyond editing or teaching, I have no idea. Words and sentences are the only things I know anything about. Sad state of affairs, but there it is.
18 - What made you write, as opposed to doing something else?
In my earliest years, I imitated stuff I liked. Books were the things I liked best, so I made (wrote, illustrated and stapled together) my own. If I’d watched a lot of TV, I’d have wanted to make TV shows. If I’d played computer games I’d have wanted to create those.
In those toddling years, though, I did not aspire to be a professional writer. I was going to be a fireman, policeman or soldier (specifically a Grenadier Guard, bearskin cap and all). During a conversation with my mother, as we enumerated career options, she suggested Writer. I was flabbergasted. People got paid to do that? It was a job? From that point forward, the story goes, I was dedicated to becoming an author.
19 - What was the last great book you read? What was the last great film?
The Sentinel by A.F. Moritz. My Night at Maud’s by Eric Rohmer.
20 - What are you currently working on?

Finishing a rewrite of a novel, due out in Spring 2011. That’ll be my first proper “book.” Writing an extended sonnet sequence. Chipping away at bits and pieces of other things.
12 or 20 questions (second series) archive;
Posted by rob mclennan at 10:06 AM
Labels: 12 or 20 questions, Peter Norman