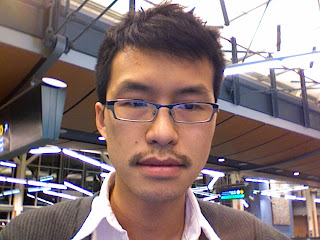 Ray Hsu is Postdoctoral Fellow in Creative Writing at the University of British Columbia. He has published over a hundred poems in over thirty-five literary journals nationally and internationally. His book, Anthropy, won the 2005 League of Canadian Poets' Gerald Lampert Award for best first book and was a finalist for the Trillium Book Award for Poetry. While completing his doctorate in English Literature at the University of Wisconsin-Madison, he taught for three years in a nearby prison, where he co-founded with incarcerated writers the award-winning Prison Writing Workshop. His second book is due this fall.

1 - How did your first book or chapbook change your life? How does your most recent work compare to your previous? How does it feel different?
My first book opened many doors: whereas marketing managers, journal editors, and others weren't necessarily willing to pay attention to me before I had a first book, they were suddenly willing to support my work with their labor. Which only exacerbates the publishing divide between those who have books and those who don't.
My most recent work is more challenging than my previous work, folks say. It feels different because much of it was written across many conversations around U.S. empire whereas the previous book was written with a different set of more "literary" (and less "social") curiosities.
2 - How did you come to poetry first, as opposed to, say, fiction or non-fiction?
I could say that poetry was the most flexible form for doing the kinds of work I wanted to do (which is true), but I first came to poetry because the poets in Toronto were the kids I wanted to hang out with.
3 - How long does it take to start any particular writing project? Does your writing intitially come quickly, or is it a slow process? Do first drafts appear looking close to their final shape, or does your work come out of copious notes?
I started my new book as soon as I had finished the previous one. But I'm often juggling a number of projects, whether they're "writing" or something else. Writing starts quickly. It's difficult to make a blanket statement as to whether first drafts look like final ones: they vary a lot, but revision usually doesn't last longer than a week or two before I begin a new piece.
4 - Where does a poem usually begin for you? Are you an author of short pieces that end up combining into a larger project, or are you working on a "book" from the very beginning?
A poem usually begins in a folder of material I've been gathering over the course of the week. Or in a pile of books I have sitting behind this screen. I tend more towards the short-pieces-from-which-a-larger-project-emerges school.
5 - Are public readings part of or counter to your creative process? Are you the sort of writer who enjoys doing readings?
Public readings are essential to the creative process, but I treat them as a genre unto themselves. Like performance art.
6 - Do you have any theoretical concerns behind your writing? What kinds of questions are you trying to answer with your work? What do you even think the current questions are?
I have tons of theoretical concerns behind my writing, but they tend to be the same questions that make me curious as a human being. So it's hard to separate what most folks call "theory" from my investments as a relentlessly curious person trying to figure out new ways to live in the world.
7 – What do you see the current role of the writer being in larger culture? Does s/he even have one? What do you think the role of the writer should be?
I see the current role of the writer as shining a light on whatever she or he choose to write about. Collectively, writers and their allies set the agenda for public attention on whatever issues they consider important, even subconsciously. I think this rocks.
8 - Do you find the process of working with an outside editor difficult or essential (or both)?
Essential. E. ssen. tial. The last piece in my first book is about working with my editor.
9 - What is the best piece of advice you've heard (not necessarily given to you directly)?
It's a close tie between Maybe Walter Benjamin's motto, "Always radical, never consistent"; and what Sting allegedly said: "Charisma is a trick. What you do is you appear to not be able to do something and then when you do it, do it better than anyone else. The contrast is what makes people love you."
10 - What kind of writing routine do you tend to keep, or do you even have one? How does a typical day (for you) begin?
Writing routine is spread over the week. I gather materials all week, then I write them up for my weekly writing group. Repeat.
11 - When your writing gets stalled, where do you turn or return for (for lack of a better word) inspiration?
My writing doesn't really get stalled.
12 - If there was a fire, what's the first thing you'd grab?
A fire extinguisher?
13 - David W. McFadden once said that books come from books, but are there any other forms that influence your work, whether nature, music, science or visual art?
Art. Conscience.
14 - What other writers or writings are important for your work, or simply your life outside of your work?
The immediate writers around me are important.
15 - What would you like to do that you haven't yet done?
Anything I haven't imagined yet.
16 - If you could pick any other occupation to attempt, what would it be? Or, alternately, what do you think you would have ended up doing had you not been a writer?
I have no idea what I'd be if I weren't a writer. I never quite thought that I'd be a writer. In fact, who is just a writer?
17 - What made you write, as opposed to doing something else?
I don't think they're in opposition. I think that'd make for boring writing.
18 - What was the last great book you read? What was the last great film?
Nongovernmental Politics, a collection edited by Michel Feher. The last great film I watched was Control, the biopic on the lead singer of Joy Division.
19 - What are you currently working on?
I'm writing my second book, which has the working title On Humanitarianism. I'm hoping to blow a few things up.
12 or 20 questions archive (second series);
Posted by rob mclennan at 10:09 AM
Labels: 12 or 20 questions, Nightwood, Ray Hsu