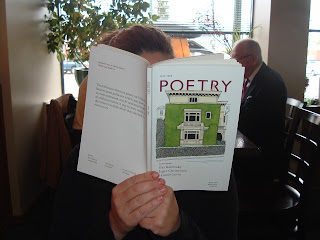 [Lainna reading an issue of Poetry] Here’s hoping you can make it to the spring edition of the ottawa small press book fair, happening June 20th at the Jack Purcell Community Centre; there’s even the pre-fair reading by five writers (McArthur, Sze, Anstee, Fuhr + Fiorentino) happening the night before at the Carleton Tavern, Parkdale Market. And watch out for the sixteenth anniversary above/ground press reading/launch/party, with readings and new publications by Roland Prevost, Lainna Lane El Jabi and Phil Hall (and perhaps more), at the Ottawa Art Gallery on Thursday, August 13 at 7pm. Or then, of course, the Talonlaunches I'm part of this week in Calgary (Tuesday, Pages on Kensington) and Vancouver (Wednesday, Anza Club). Will I see you at any of these? Check out, too, an interview I just did with Vancouver poet Elizabeth Bachinsky.

Edmonton AB: Former Vancouver and current Edmonton resident, the poet Marita Dachsel has published sparingly over the past decade and a half, whether a chapbook with above/ground press back in 1996 or a trade poetry collection but a couple of years back, so a new poetry chapbook from Trisia Eddy’s Red Nettle Press is something to pay attention to, her Eliza Roxcy Snow (2009).

I will never feel the ache
of filling breasts
heavy for release
or the need to hide my blouse
blooming with stain,

but do not be mistaken.

I know the urgent suckle
of a needy mouth.

Eliza Roxcy Snow is a series of unmarked photographs, a series of flashes, of flickers; an odd kind of collage work that isn’t really explained, and moves, fluid, from page to page. As the back of the small collection explains:

This is a work of fiction, inspired by the real Eliza Roxcy Snow, polygamous wife of Joseph Smith, founder of the Latter Day Saints (Mormon) Church. It is by no means meant to be read as a biography of the woman. For factual information on her, I suggest reading In Sacred Loneliness: The Plural Wives of Joseph Smith by Todd Compton.

The connections are made and the narratives created by the reader. A break from her first collection of poems, this works far less of a narrative but threads nonetheless.

There are many versions of the story,
& you should be wise enough to know
that truth is filtered through tongues.

Calgary AB: I’m liking this new publication derek beaulieu is working through his No Press, speechless 1, “dedicated to the dissemination and discussion of visual and concrete poetry.” beaulieu has long been a proponent of the form, through his own work as a writer, critic, editor and publisher, including his own essay on such in his title with Talonbooks, his work with filling Station magazine, and perhaps bringing the form into Canadian literary journals the past few years in a way that hasn’t been seen since the small press explosion of the 1960s and 70s, with his own work appearing in journals that traditionally don’t publish such work. The first issue is a lovely production (just like all of his other No Press publications), featuring the work of Eva Gonzalez, Rachelle Pinnow, Helen Hajnoczky and Mary Ellen Solt, including the essay “Writing the Concrete Body: Cixous, Solt, and the Feminist Potential of Concrete Poetics” by Hajnocsky. I wonder if she has written about Vancouver visual/concrete poet Judith Copithorne? He says that submissions are welcome, c/o #2, 733-2nd Avenue NW, Calgary AB T2N 0E4.
Posted by rob mclennan at 10:28 AM
Labels: derek beaulieu, Helen Hajnoczky, Judith Copithorne, Lainna, Marita Dachsel, No Press, Red Nettle Press