12 or 20 questions: with Sandra Ridley 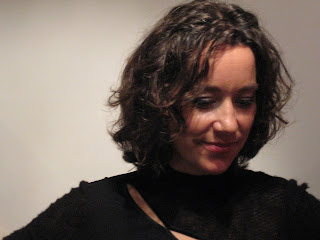 Fond of sitting on stairs and rainy days, Sandra Ridley’s first manuscript of poetry, Downwinders, won the 2008 Alfred G. Bailey Prize. Part of this collection, Lift: Ghazals for C. was published as an art chapbook by JackPine Press. Her second collection, Post-Apothecary, was a finalist for the 2009 Robert Kroetsch Award for Innovative Poetry.

Not sure that it did, but getting the call from JackPine was definitely exciting. First time I saw their chapbooks, I fell totally in love with the press and their support of artist/writer collaborations. Hadn’t been writing that long when they accepted my submission, so was privileged to be in such good company. Felt like my writing was valued. Bought bubbly.

Recent work? I’ve been playing with overlaying images and like-minded sound-based words, trying to develop a looser, not quite so linear, narrative. Which seems different to me than earlier work. Less constrained.

If I ever had interest in writing non-fiction, I lost it in academia. As for fiction, in a way I didn’t have a choice in the matter – it never occurred to me. My writing started as small handfuls of short lines. The lines and poems lengthened. And the more I think about writing a long poem, a book-length long poem, the more it feels I’m approaching fiction. Lines are wrapping around. What’s happening?

Difficult to say. For me, projects overlap and inform each other. Extend. I’m planning and researching a second one before I’ve finished the first. Ideas tend to come quickly, some workable, most not. But the work also gets stuck quickly too – and first drafts take a very long time. I’m always considering and reconsidering how I can best do what it is I want to do. Second guessing. My new manuscript Post-Apothecary is structured by forays into ideas of sickness, seclusion and disorientation. How can this stuff be represented on the page? Can I write in a way that a reader could feel any of that? Probably not, but I’ll try. And I do take far too many notes.

With an image or juxtaposition of images. Odd pairings of words and phrases. Unexpected connections are generative for me, and one reason why I love doing background research. Never know what’ll be dug up. I have lots of stray poems, but for the most part, I work toward a longer serial. I like writing with the idea of a trajectory of atmosphere in mind, say poems building toward a mood, rather than a specific narrative arc.

I’m somewhat introverted and don’t naturally enjoy reading in public, but it does make the writing stronger. Suddenly painfully aware of what isn’t working. It might be a fixable thing like having the ‘wrong’ word or rhythm or sound pairing, or it might be that the poem just isn’t working at all. I’d much rather be in the audience than be the one reading. I do enjoy listening to writers who read their work well. It’s an art.

Nope. Not sure. And not sure.

Tough questions, rob. I think a writer should write – and if all goes gangbusters, a reader is somehow altered. But maybe at base level, the role of the writer shouldn’t be any different than the role of anyone else – it would be nice if everyone put their best effort into making life more livable.

I appreciate having outside editors – most are writer-friends of mine, whose work I respect. For me, it’s essential to have their perspective and objectivity. Fresh eyes. Savvy editors see what’s missing. Well, they see what needs to be there, and what doesn’t – and can motivate a writer to push their language or larger structure.

When not freelancing, I have a simple order of operations. Get out of bed, turn on the laptop, make coffee, stare at the screen, shuffle paper, walk the dog, eat when necessary, daydream, read, read, read. If a day goes by without me doing something active towards a writing project, I get real cranky.

Other people’s books, random pickings from library stacks, long walks outside, films at the ByTowne Cinema. Generally, contact with something unfamiliar.

Hansel or Gretel. Take your pick. Both abandoned in a dark forest, dropping breadcrumbs but getting lost anyways, being lured by candy, then taken and locked up by a child-eating witch. Need I say more? Wait, how did it end?

The environment surrounding, for sure. Woods, fields, cityscape. When I was doing research for Post-Apothecary, I snuck into the grounds of Fort San, a TB sanitarium in Saskatchewan, and hung around the abandoned buildings. It’s been closed for years, but, for what’s worth, I tried to experience the environment as much as I could, for the short time I was there. And I went back. Place is important – it sets tone and atmosphere, generates image, and carries its own language. For me, it informs the whole process of writing.

Old photos and ephemera. I love digging through boxes in archives.

Surf and collaborate with another writer on a book-length work. Tell me they’re not mutually exclusive.

A photographer. A beer slinger at the local pub. Still tempted by both, so who knows? Is The Manx hiring?
17 - What made you write, as opposed to doing something else?

I’d be writing no matter what else – seems essential to me.

Films. Bladerunner and Gus Van Zant’s Gerry. Can’t tell you how many times I’ve seen both, this year alone. Books. Poetry? Finally added George Bowering’s Kerrisdale Elegies to my shelf. Fiction? Nicole Brossard’s Mauve Desert. I keep going back to it. And Michael Blouin’s Chase and Haven. For god’s sakes, someone give him an award for that.