12 or 20 questions: with Ken McGoogan 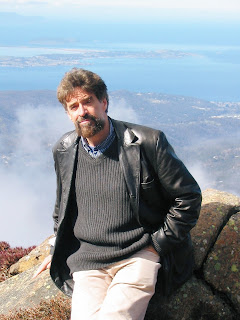 Ken McGoogan is best-known as the author of an Arctic Discovery Quartet of biographical narratives: Fatal Passage, Ancient Mariner, Lady Franklin’s Revenge, and Race to the Polar Sea. His awards include the Writers’ Trust of Canada Biography Prize, the CAA History Award, the UBC Medal for Canadian Biography, and the Pierre Berton Award for History. Ken chased the ghost of Lady Franklin around Tasmania, lugged a memorial plaque honoring John Rae into the High Arctic, and made a cameo appearance in the BBC docudrama based on his book Fatal Passage. He serves as vice-chairman of the Public Lending Right Commission, and sails in the Northwest Passage as a resource historian with Adventure Canada. Keep in touch at http://www.kenmcgoogan.com/ and http://www.kenmcgoogan.blogspot.com/.

My first book did not change my life. Neither did my second, third, or fourth. While writing and publishing those books, I continued working at my full-time job in journalism. And I kept the only schedule that ever worked for me, and which I had followed for years before I published my first book: get up at 5 a.m. (or earlier) and write until 8:30 or so, then have breakfast and head off to the newsroom.

2. – How did you come to fiction first, as opposed to, say, poetry or non-fiction?

At eighteen, when I moved into Montreal from a small French town, I wrote poems and songs. I abandoned poetry, but over the years, through several different periods, I have written scores of songs. You can catch one of them here: http://www.youtube.com/watch?v=aeuGZkSNPPQ

Apart from songs, I did focus at first on writing fiction. I was swept up in the romance of the fiction writer, starting with my father’s favourite writers, Thomas Wolfe and Ernest Hemingway. The disreputable Henry Miller caught my fancy, and then Jack Kerouac.

My early stories elicited a few encouraging rejections, and at twenty-one, during a summer in the Laurentians, I produced a novel-length manuscript. It stank so badly that quickly buried it. It taught me that I did not possess anything like the craft needed to write a decent novel. I could either quit or apply myself to acquiring that craft.

I make fewer false starts now than I once did. I’m a relatively fast writer because for more than twenty years, after training at Ryerson, I worked as a journalist in Toronto, Montreal and Calgary. I develop a rough outline and take a lot of notes, and then I write quite polished drafts. I do not hesitate to jettison passages, pages and even whole chapters if I see that they aren’t carrying freight.

Lately, I have been writing mostly narrative non-fiction. When I was living at Berton House in Dawson City, promoting Fatal Passage about explorer John Rae, and writing Ancient Mariner about Samuel Hearne, I had an epiphany. I remembered the four-book architecture of Lawrence Durrell’s Alexandria Quartet (the only good thing about it), and saw how I could build my northern exploration books into an Arctic Discovery Quartet.

I enjoy performing publicly. I don’t mind doing a straight reading, but I much prefer to present a book, talking about how it came into being, showing slides where possible, and leavening the performance by reading short passages.

6 - Do you have any theoretical concerns behind your writing? What kinds of questions are you trying to answer with your work? What do you even think the current questions are?
I have read a fair bit of literary theory, as you can see in my best novel, Visions of Kerouac: Satori Magic Edition: http://www.willowavenuebooks.com/. These days, I am interested in the overlap between fiction and non-fiction, in the “nonfiction novel,” and in issues that arise around applying fictional strategies to factual material.

8 - Do you find the process of working with an outside editor difficult or essential (or both)?
For my last four books, I have worked Phyllis Bruce, who has her own imprint at HarperCollins Canada. Phyllis is one of the best editors in the country, and she has improved every one of those books. In the past, I have worked with absentee editors and with dunderheads. I prefer the former to the latter.

Asked what advice he would give a would-be writer, Henry Miller said: “If you can find something else to do, anything at all, do that other thing.”
Miller was suggesting that a life in writing can be a hard, long road. If you see an appealing turn-off, best check it out.
10 - How easy has it been for you to move between genres (fiction to non-fiction)? What do you see as the appeal?

In the beginning, I saw myself as a fiction writer. I published a few stories in the early 1970s, and then, while learning my craft, completed several novels that will never see print. To earn a living, I trained as a journalist and began working in newspapers. My journalism led to my first non-fiction book, Canada’s Undeclared War: Fighting Words From the Literary Trenches. After that, I published three novels. Then I applied everything I had learned from both fiction and journalism to a non-fiction narrative. Bingo! Fatal Passage won four awards and became a docudrama.

To begin the day, I read The Globe and Mail over breakfast. I work from eight-thirty or nine until six with breaks for lunch and a workout, a walk or a bike ride. Of course I remain flexible, and take the odd afternoon to get a haircut or visit Canadian Tire.
12 - When your writing gets stalled, where do you turn or return for (for lack of a better word) inspiration?
Maybe it’s because I worked all those years in a world of daily deadlines, when getting stalled was not an option. Or maybe it’s because I have been writing for over forty years, and have come up against most every challenge. To tell the truth, I don’t get stalled. Writing a book is like beating your way through a jungle. Sure, you might encounter a vertical cliff, a lethal snake, or a raging river. But if you’ve brought the right tools into the jungle and know how to use them, what’s the problem? If you keep getting stalled, look to your craft.

What have you got?
14 - David W. McFadden once said that books come from books, but are there any other forms that influence your work, whether nature, music, science or visual art?

I agree with David. And I tell those I teach: Writers write what they read.
Other influences impinge, of course. When walking my dog, I’m often amazed at how he can smell a chicken bone, zip over and snatch it before I even know it’s there. The writer’s unconscious mind is like that. It can find a tasty bit of gristle in a pile of wet leaves.

15 - If you could pick any other occupation to attempt, what would it be? Or, alternately, what do you think you would have ended up doing had you not been a writer?
Number two has always been singer-songwriter. Although in high school, I did win a trophy as athlete of the year. I’m almost as tall as Jose Calderon of the Toronto Raptors (I ran into him one day at Starbucks). Maybe if I’d honed my skills as a point guard instead of as a centre, I could have played in the NBA.

16 - What made you write, as opposed to doing something else?

Writing is a vocation. Speaking as a professional, the devil made me do it.
17 - What are you currently working on?
I’m writing a book about Scottish Canadians.
And thinking of calling it Canada’s Tartan Parade: How the Scots / Marched Through Time / To Create a Canadian Space.
12 or 20 questions archive (second series);
Posted by rob mclennan at 10:04 AM
Labels: 12 or 20 questions, Ken McGoogan

Great, in effect, interview with my very successful writer friend Ken McGoogan, telling me much of what I've wanted to know about his writing life and was afraid to ask. And now that I've discovered your blog, I'll be checking it out.