Continuing a thread of years’ worth of theme issues comes The Capilano Review 3.8, “Moodyville,” produced as a co-publication with Presentation House Gallery, in an issue of poetry, fiction, essays, film stills, interviews and visual art on and around North Vancouver. As Helga Pakasaar writes in her piece, “Moodyville,”:

For the Moodyville exhibition, seven artists were invited to produce new works that respond to North Vancouver—the locale of Presentation House Galley and its home in a designated heritage building. The show’s title suggests an imaginary place, a state of mind, and a particular history, especially the city’s ties to resource extraction industries. Moodyville was the earliest non-indiginous and industrial settlement on Burrard Inlet. Founded in 1872 near today’s Saskatchewan Wheat Pool terminal, it was a prosperous, albeit short-lived, sawmill community that boasted the first library in the Burrard Inlet. Invoking the city’s beginnings through collective urban memory, the Moodyville project explores changes in civic identity as visions of the future relate to a barely-remembered past. 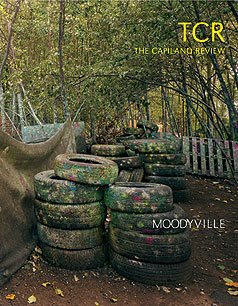 What the subsequent issue does, then, is take that idea and continue it, with some 200+ pages by Canadian and international poets, writers and artists alike, including Colin Browne, Aaron Peck, Pierre Coupey, Molly Bobak, Ingrid Baxter, Daphne Marlatt, N.E. Thing Co., Gary Geddes, Peter Culley, Jeremy Shaw, Lisa Robertson, Michael Turner and others. What I like about this issue is the physicality of it, writing Vancouver, the city and everything that comes with it, whatever physical, environmental, cultural, emotional and otherwise baggage, writing Malcolm Lowry, writing trees that sweep over garbage dumps, writing the narrows bridge and the entire city in small parcels, writing.

In sleep so thick
the panels of the trucks
pivot through the birds & bricks
that flap above the viaducts
on downs as soft as poplar fluff
revealing projects never needed,
zombie gardens never weeded
& a ragged couch’s burning fleece
prompts no visit from police—
a hermaphroditic order
in the standing water
a kind of turbid flux
flaps above the viaducts (Peter Culley, “Five North Vancouver Trees”)
Posted by rob mclennan at 10:02 AM
Labels: literary journals, Peter Culley, The Capilano Review