12 or 20 questions: with Zachariah Wells 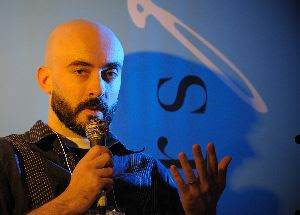 Bio: "After living in six different provinces and territories, Zachariah Wells no longer knows where he's from or where he's going. Old books include Unsettled (poems); Jailbreaks: 99 Canadian Sonnets (anthology) and Anything But Hank! (children's picture book, co-written with Rachel Lebowitz, illustrated by Eric Orchard). New books will be Track & Trace (poems, 2009) and Career Limiting Moves (critical prose, 2010). Wells is reviews editor for Canadian Notes & Queries, passenger train attendant for Via Rail and blogger for his own self-indulgent person."

1 - How did your first book or chapbook change your life? How does your most recent work compare to your previous? How does it feel different?
Because I have an embarrassing predilection for the actuarial, I'm breaking your multi-part questions down to a, b and c. My answers will be further subdivided i, ii, iii, etc.
a) i) Before my first book was published, I was a semi-employed bum. After it was published, I was a semi-employed author. This has made all the difference. (Rich galas, etc.)
ii) I started using my ISBN as the basis for choosing lottery numbers.
iii) My grant applications stopped getting rejected.
iv) Other people with books started talking to me.
v) I began to have nightmares involving being pursued by an enormous fanged book that bore a vague resemblance to my mother. Make of it what you will.
b) i) My older work has a lot of coarse language in it. My new work ... oh fuck, never mind.
ii) I don't really keep track of what I wrote when. Several poems that are in my forthcoming collection are older than most of the poems in my previous book (one of the poems is, in fact, a revision of a poem from my first book, which appears there in two different versions). The third book, should it ever materialise, will be similarly shingled. How a writer's work changes over time is rarely of much interest to me. If the work's any good, it's a pretty trivial consideration. If it's bad, even more so.
c) More velvety.
2 - How did you come to poetry first, as opposed to, say, fiction or non-fiction?

As opposed to being a rock 'n' roll star, actually. I'm completely tone deaf. So I went for a really lame second choice. Third actually. Pro baseball player would have been my first choice, but my athletic gifts are only marginally more impressive than my music skills. So basically, I'm kind of a loser and I'm pretty lazy. Isn't that how we all get here?
3 - How long does it take to start any particular writing project? Does your writing intitially come quickly, or is it a slow process? Do first drafts appear looking close to their final shape, or does your work come out of copious notes?
a) What's a writing project?
b) My writing sometimes has problems with premature ejaculation, but I got some killer pills online that are helping with that.
c) Because I'm a genius, brilliant poems pretty much emerge fully-formed from my brow, naked and gleaming.
4 - Where does a poem usually begin for you? Are you an author of short pieces that end up combining into a larger project, or are you working on a "book" from the very beginning?
a) Top of the page.
b) I write poems.
5 - Are public readings part of or counter to your creative process? Are you the sort of writer who enjoys doing readings?
a) Readings are more relevant to me than books.
b) Ibid.

6 - Do you have any theoretical concerns behind your writing? What kinds of questions are you trying to answer with your work? What do you even think the current questions are?
a) Maybe, but my poems are pretty quick, so I'm sure they can outrun them.
b) i) Where do babies come from?
ii) What's the frequency, Kenneth?
iii) Why do fools fall in love?
iv) What the fuck were you thinking?!
c) Same as they've ever been.
7 – What do you see the current role of the writer being in larger culture? Does s/he even have one? What do you think the role of the writer should be?
a) Don't really care.
b) Not much of one.
c) To write.
8 - Do you find the process of working with an outside editor difficult or essential (or both)?
Do you mean, like, a foreigner? I don't think foreign editors should be taking the jobs of Canadian editors.
9 - What is the best piece of advice you've heard (not necessarily given to you directly)?
At a high school graduation party, my grade 11 English teacher Edward Zrudlo, by this point well in his cups, said to me: "Zach, you have the soul of a poet. You have to study classics."
Unfortunately, he was slurring so badly that I heard "plastics." Man, was that ever a dead end.
10 - How easy has it been for you to move between genres (poetry to critical prose)? What do you see as the appeal?
a) I don't really move between genres. I write poems when I feel like it and reviews and essays when someone asks me to. Occasionally, the opposite is true, but not often.
b) It's thoroughly unappealingly, but I'm a bit of a loser, like I said.
11 - What kind of writing routine do you tend to keep, or do you even have one? How does a typical day (for you) begin?
a) Nope.
b) My son cries. I wake up. Then I close my eyes again. Then my son smacks me on the head. Etc.
12 - When your writing gets stalled, where do you turn or return for (for lack of a better word) inspiration?
Nowhere. I just wait. The physical act of writing is incredibly over-valued, I think.
13 - What fairy tale character do you resonate with most?
Jesus.
14 - David W. McFadden once said that books come from books, but are there any other forms that influence your work, whether nature, music, science or visual art?
If David said that, it's hardly an original observation. Quite banal, actually. Shame on you, David. Also, "nature, music, science [and] visual art" aren't forms, per se. In answer to your question, poetry that simply refers to other poetry--especially poetry that refers mostly to contemporary colleagues of the poet--bores the hell out of me, and is a sure sign that the poet has no sense of an audience greater than his or her circle of peers.
15 - What other writers or writings are important for your work, or simply your life outside of your work?
Too many to name, really. Which ones are most important changes with time and sometimes cycles. But a few key figures, who may or may not have influenced my writing: Joseph Conrad, Fyodor Dostoevsky, Ted Hughes, John Clare, Elizabeth Bishop, Robert Frost, Yukio Mishima, Irving Layton, Bruce Chatwin, Robert Browning.
16 - What would you like to do that you haven't yet done?
Retire. Which is a bit of a lie. Tho I've been in the workforce every year since I was 14, I've yet to work an entire year. But working partial years is starting to get old, and I'd like to give it up sooner than later.
17 - If you could pick any other occupation to attempt, what would it be? Or, alternately, what do you think you would have ended up doing had you not been a writer?
These questions don't pertain to me, as I've never been a full-time writer. I'm neither wealthy nor irresponsible, so I've worked. Mostly in the transportation industry (seven years for an airline and five years and counting for Via Rail).
18 - What made you write, as opposed to doing something else?
Again, tone deafness.
19 - What was the last great book you read? What was the last great film?
a) Light in August by Faulkner.
b) I've never read a film. I saw a Swedish film called Songs from the Second Floor that was pretty brilliant. One of the best lines ever: "You can't make money from a crucified loser."
20 - What are you currently working on?
Packing up my apartment in Vancouver to move back to my house in Halifax. I can pretty safely boast now that I'm one of the only tri-coastal writers in the country. Oughta be worth some beer.
12 or 20 questions archive (second series);
Posted by rob mclennan at 9:14 AM
Labels: 12 or 20 questions, Biblioasis, Insomniac Press, Zachariah Wells