12 or 20 questions: with Oana Avasilichioaei 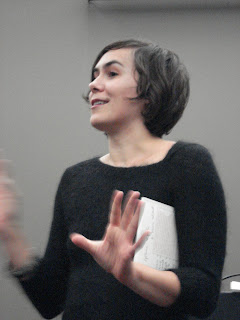 Oana Avasilichioaei is a poet and translator who, after exploring the territories of Eastern Europe in Abandon (Wolsak & Wynn, 2005), transformed the landscape of Vancouver’s Hastings Park into feria: a poempark (Wolsak & Wynn, 2008). She has translated Nichita Stănescu from Romanian, published as Occupational Sickness (BuschekBooks, 2006), Louise Cotnoir and Geneviève Desrosiers from French, and has performed her work in Canada, USA, Mexico and Europe. She was the founder and curator of the Atwater Poetry Project reading series from 2004 to 2009. A collaborative work with Erín Moure, involving authorial and translational impossibilities, will appear as Expeditions of a Chimæra fall 2009 (BookThug). She lives in Montreal.