12 or 20 questions: with Carrie Olivia Adams 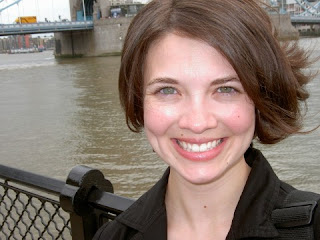 Carrie Olivia Adams is a book publicist for the University of Chicago Press and the poetry editor for the independent publisher Black Ocean and the journal Hunger Mountain. Her poems and films have appeared in such journals as The Laurel Review, Cranky, Coconut, Dear Camera Magazine, DIAGRAM, and Lilies and Cannonballs Review. She is the author of Intervening Absence (Ahsahta 2009) and the chapbook A Useless Window.

1 - How did your first book change your life? How does your most recent work compare to your previous? How does it feel different?
When Janet Holmes from Ahsahta called to tell me that my book had been accepted, I was sitting in my office at the University of Chicago Press. I remember my reaction as silent shock followed by effusive gratitude. And then I hung up on the phone and realized I had to go back to work. Here it is—this enormous, momentous event that I had been dreaming of since I was 17—but desite being filled with meaning for me, it didn’t really change the world. You keep your day job. You probably should still eat the lunch you packed that morning. You will still have to wait for the bus and ride in a sticky seat. Yet, what it did allow me was a huge sigh of relief. There were three years between when my book was accepted and when it was published, and during those three years I felt a wonderful sense of freedom. I could let go and move on. That was worth almost as much to me as knowing that some stranger had picked up my manuscript and wanted to publish it for no reason other than that she liked it.
In the three years that I was awaiting publication, my work moved from being cinematic in tone and approach to actually, literally cinematic. I began to experiment with shooting and editing my own videos to be companions to my poems. And the videos and the films grew up together. My next book, 41 Jane Does, will have an accompanying DVD when it’s published in 2013.
2 - How did you come to poetry first, as opposed to, say, fiction or non-fiction?
I wrote my first poem when I was 7; I found it awhile back. It was about the Tete-a-Tete Daffodils in my mother’s garden. Even then I think I was in love with sound, and I wrote the poem to be able to say Tete-a-Tete over and over again. I’m not a patient person, and I get hung-up on details. I don’t have the focus it takes for a novel. I’m fluttery. I write and walk and type a line or two and wash a dish or a stir a pot. Poetry is perfectly happy if I can’t sit still. I think in terms of the sentence, the equation. One word hooking onto another. I’m a bricklayer. A tightrope walker.

I love the works that are the opposite of mine. I love to read the largest novels. Those that are totally impractical to haul on an airplane or on the subway, but I do it anyway. Gigantic contained worlds that you never ever want to end. Proust, Tolstoy, Musil . . . are essential to me.
12 or 20 questions archive, second series;
Posted by rob mclennan at 10:02 AM
Labels: 12 or 20 questions, Ahsahta Press, Carrie Olivia Adams