I could see who was alive
now and who died

I could see now
who was dead

who was alive (“AUGUST”) 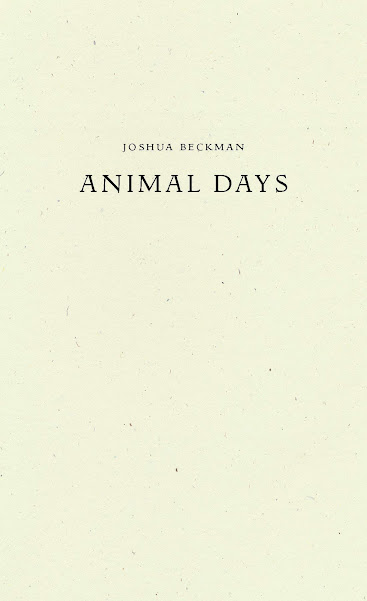 The latest from American poet and translator Joshua Beckman is Animal Days (Seattle WA/New York NY: Wave Books, 2021). As the back cover offers: “Written from inside of illness and gathered over several years, these fragments or moments invite readers to contemplate how the compromised body transforms our conceptions of selfhood and our sense of the world.” Animal Days is composed via six extended poem sequences, each threading together an accumulation of short fragments: “IT SEEMED TOO MUCH,” “LITTLE PRICKLY COMING OF STORM,” “THE GLACIAL TRIP,” “DRAWING X’S ON THE TABLE,” “AUGUST” and “ANIMAL DAYS.” Beckman writes from the inside of an awareness of the frailty of the human body, even from the first page of the opening poem: “the pursing / and bursting / of cells / blood / in the skin / in the face / blood exploding / inside us / like that [.]” There is such a slowness etched into the lines and fragments of these accumulations, extended stretches of thought that sit perfectly against each other. There is such a slowness etched into every word—a slowness that coheres and allows for simultaneous pause and quick thought—and one that is remarkably physical. Honestly, for anyone who is attracted to slow, thoughtful work with remarkable speed—one could think, also, of Cameron Anstee, Michael e. Casteels, Jack Davis and the late Nelson Ball—Beckman’s dual essay collections The Lives of the Poems and Three Talks (Wave Books, 2018) are perhaps the finest collections of critical prose I’ve read (so much so that I’ve been completely unable to articulate how good they are).

There are moments when his sketched-out fragments give an epistolary sense, as though he is writing from his kitchen table, perhaps, out to someone (whether generally or specifically) in the wider world: “reading it / even as I / got reading / it even as / I write you / this letter” (“DRAWING X’S ON THE TABLE”). Throughout the six threads of Animal Days, Beckman’s lines adhere to a particular minimalism, but one that furthers the line of thought as far as might be possible, stretching out across the lyric. “a sheet / of it / held,” he writes, as part of “LITTLE PRICKLY COMING OF STORM,” “constellation-like / in the back yard / responding / to wind // clothespins for / fingers // houses / blown down the road / through the town // like a toy [.]”