They say hope survives because we lack
foresight yet here

a child who cannot know to mourn
your possibilities, the particular

her babies, mark her mouth, blame
her congealed heart

her blood a think Valentine
of love & consumption—

what happens elsewhere
happens to another, to some other,

at some other time
able to quiet the calls at the door. 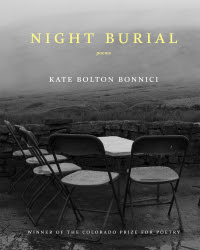 Winner of the 2020 Colorado Prize for Poetry is California poet Kate Bolton Bonnici’s full-length debut, Night Burial (Fort Collins CO: The Center for Literary Publishing, 2020), a book-length elegy around and through her mother’s illness and death. “Quiet & you are not among the / quick but the dead I / quickened once in your womb you who felt my own / quickening // rested your hand on my / round belly at 20 weeks / riding to Pensacola a daughter / reached,” she writes, to open the title poem-section. Night Burial is composed as two sections of lyrics followed by an extended lyric title sequence, and closing with a final section of short lyrics, all of which are structured to highlight small moments amid the larger crisis, medical appointments and dissolutions. “Your mother dies.” she writes, ending the title poem-section. “The most ordinary thing.”

Bonnici writes around the death of her mother, circling the occasional other relationships around that central core, including her husband’s response to his own mother’s death, the ghost of her grandmother’s death, and the reactions of her mother’s death by and around her small children. “Since someone is always thirsty,” she writes, as part of “WITCHSPEAK,” “I deliver a child daily into want [.]” As Bonnici responds as part of a recent interview conducted by The Center for Literary Publishing’s managing editor, Jess Turner: “Night Burial addresses and cries out for absent beloveds—mother, family in Alabama and elsewhere, children close by but developing their separate selves, husband who walks his own path of maternal passing. These are my household gods, personal and yet part of larger lyric impulses, twining solitude with community, disruption with participation, death’s particularized intimacies with the rituals of ordinary time. And this is what I imagine: as a book that is read, each address summons new communion, new remembering, choral and so shared. As a book held in others’ hands, the poems find their location—a true lararium fixed for good and for real.”

There is such an ease, a clear precision to her poems, composing a lyric of direct statements packed with nuance and density, reminiscent slightly of the lyric of Ottawa poet Sandra Ridley: there’s an emotional content both directly open and held back with remarkable restraint, composed across a sequence of sentences and an extended accumulation. Through this, Bonnici allows for the sum of its parts to present what her direct statements slowly unfurl: a collection of deep attention and grief. And the book is rife with incredible moments: “My earliest memory of my daughters they / will have forgotten,” she writes, as part of the poem “IT WAS A COMMON NIGHT,” “which is not the same / as not having known.” Later on, as part of the poem “’IN YOUR ABSENCE THERE ARE NO MORTAL BANQUETS.’,” she writes: “What remains / remains to be seen / never / is what I’m afraid of [.]” Further on, in the same piece: