The book you hold in your hands came together slowly over the course of a much-interrupted decade. I do not need to describe all the delays and peregrinations that came next, the cul-de-sacs, dead ends, pits and valleys. Somewhere in all of this was a transition. Somewhere we stopped being young newlyweds. Somewhere we stopped being angry at our upbringing. Maybe it was Galileo, maybe it was the poetry. Maybe it was the kids, the garden, the funerals, the crushing routine boredom. Or maybe it was trying to figure out how I could answer the questions my children will inevitably ask. I will say that I am happy that this collection does not end where it began.
So back in the snow at Emerald Lake, I was holding what I thought to be a book of answers. It turned out to be as treacherous as all books are and became a book of questions in my hands, asking me: What do you value? What are you striving for? Does the endless, repetitive minutiae of daily life mean anything? What will you stand for? Who will be the witness? How have we as a species survived? Why can’t we see that we have too many different words for the same concepts?—of course the Tower of Babel confused all of our names for God. Did you really think that there was a difference between science and religion? What do you believe? (“RESULTS AND CONCLUSION: DIALOGUE CONCERNING THE TWO CHIEF WORLD SYSTEMS”) 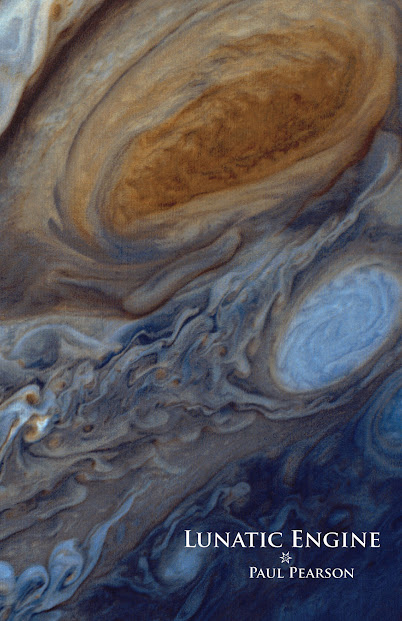 From Edmonton poet and Olive Reading Series co-founder Paul Pearson comes the full-length debut, Lunatic Engine (Winnipeg MB: Turnstone Press, 2020), a poetry collection with a hefty, multiple-part preface/introduction, outlining how, why and how much this book owes a debt to American writer Dava Sobel’s Galileo’s Daughter: A Historical Memoir of Science, Faith, and Love (Penguin Books, 1999), a book “based on the surviving letters of Galileo Galilei’s daughter, the nun Suor Maria Celeste, and explores the relationship between Galileo and his daughter,” and Letters to Father: Suor Maria Celeste to Galileo, 1623-1633 (Penguin Books, 2001), an assemblage of letters translated, introduced and annotated by Sobel. Through the poems of Lunatic Engine, Pearson interplays two distinct threads—of both celestial (including notions of God and of Galileo’s explorations of the universe) and domestic examination—and writes out, as part of his preface, a semi-facetious “INTRODUCTION: THEMES FOR BOOK CLUB,” that lay out the six concerns of the larger collection: “The relationship with your father, stargazer, absent parent,” “The death of your mother,” “The love poems, your relationship with your spouse,” “Becoming a father (and the deep concern that you’ll do it right),” “The mirror world of Galileo and his daughter—another complex but loving relationship” and “The drive to understand the universe, then and now, given the tools we have.” It is a curious way to not only shape a poetry collection, but to offer as outline those same structures. Rife with footnotes, his preface offers, these “are also fragments from the letters between Galileo and his daughter—as if they were commenting on phrases in this book,” and the interplay is intriguing. “To be so close to the truth,” he writes, as part of “SINCE THE LORD CHASTISES US / WITH THESE WHIPS,” offering the footnote: “it is certain that when we possess this treasure / we will fear neither danger nor death [.]”

Within the framework of a collection of seemingly traditional, first-person lyric narratives, Pearson’s Lunatic Engine offers a more complex structure for the book-length poem. The only comparison I can think of, off the top of my head, might be with Vancouver writer Michael Turner’s American Whiskey Bar (Vancouver BC: Arsenal Pulp Press, 1997), a novel about the making of a screenplay that included the screenplay, and the faux-story of how the process of writing and producing the screenplay all went to hell: a relatively straightforward narrative within a larger and more complex framework. “this is the first two body problem,” Pearson writes, to open the poem “OBSERVANT EXECUTRIX OF GOD’S COMMANDS,” “a daughter of God and the father of science separated / what Galileo’s eye augmented by bending / light to curiosity.” Pearson’s poems offer explorations on some pretty hefty concepts, and the interplay of the minutae of daily interaction in curious ways, writing on faith, marriage, parenting and loss, and the possibilities and impossibilities of all of the above.

IN THE VERY FACE OF THE SUN