This imagined abundance of heresy

To draw a line with our eyes closed 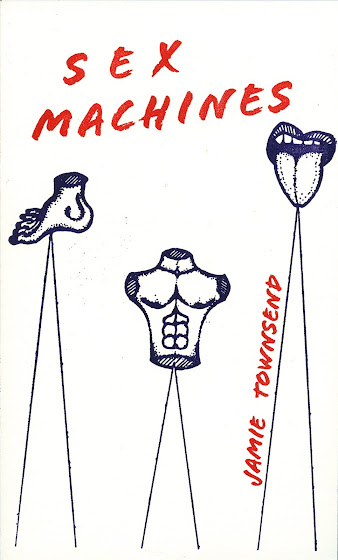 Oakland, California poet and editor Jamie Townsend’s latest is Sex Machines (Oakland CA: speCt! books, 2020), an assemblage of short lyric poems as accumulation of direct statement and exposition, piling sentence upon sentence in burlesque fashion. Townsend works with the building blocks of sentences, describing their way into being, composing poems that accumulate but with a staggered and slow process, one that twists and thwarts. “So much conversation fills in the space where I shake,” Townsend writes, as part of “LOW HANGING FRUIT,” “My head and my face become a blur and the choice // Seamlessly blurs into fate, bikini briefs // Or cotton boyshorts, the promise of breathability // Feelings of idleness and stimulation [.]” Townsend’s poems speak of transformation, transmogrification; articulating how change turns and twirls; articulating a refusal to remain static, and the shifting nature of matter, thinking, being and perception. “We disappear into every room that has a mirror,” they write, to open the poem “EYE GUNK,” “as if there really was an other side // Sweet and chemically altered // Turns out this is not a successful intervention // More than a wrinkle in time [.]”

The author of six chapbooks [full disclosure: above/ground produced one, with a further forthcoming] as well as the “long-form collection” Shade (Elis Press, 2015), Townsend’s Sex Machines writes on love and longing, sashays and forays into being and completion. “I first saw my horizon end beneath the foothills of Boulder,” Townsend writes, to open “NATURE VS NATURE,” “Exuberant sky unable to hold the rain, each afternoon is a cafe // I read Wrong / And watch the tiny arc of a puckering asshole from its own / microclimate [.]” Theirs is a jubilant, staccato, pulsing lyric, one that gyrates against meaning, and pushes theory into lyric action, glistening into abundance.