THESE DAYS I write only long poems. To compose a ten-line poem, say, with a good first and a devastating last line—it doesn’t move me. Though, of course, poems do have last lines and sometimes the last line devastates. But that’s not (really) the (only) tend of a poem. The poem’s end is to endure.

I’ll write the same poem for weeks or months at a time, composing almost every day at roughly the same time of day. it’s like extending a single annotation over an obdurate duration. I write to discover a form, but the form is also discovering the language and the thinking, and it happens out of order. (Lyn Hejinian in “The Rejection of Closure”: “Form is not a fixture but an activity.”) It is not decided in advance what the thinking will be, but inklings of sensuous and nonsensuous matters have been amassed in preparation. The system to writing is rhythm. Prosody prompts me to find ample instants of acuity to put together a structure in which thought and feeling can proceed/regress with an against the methods of time. then I rewrite for one year or several years. I rewrite by hand and practice the shapes of the text as I reshape it. The phrase “No precision that isn’t imprecision” haunts my practice. The whole thing drips with time.

I am very taken with Aditi Machado’s forty-page chapbook-length lyric essay on form, The End (Brooklyn NY: Ugly Duckling Presse, 2020), an enviously-produced small item that exists in a series of chapbook-length essays by Brooklyn publisher Ugly Duckling Presse (other items on my desk from the same series, and published this year, include Magdalena Zurawski’s Being Human Is an Occult Practice, Claudia La Rocco’s Quartet and Mirene Arsanios’ Notes on Mother Tongues). The End is an extended lyric essay on poetic composition and endings, writing on elements of teaching and her own writing process, as well as critiques on and examples of poems by Paul Celan, James Wright, Lyn Hejinian and Rilke, specifically Rilke’s “Archaic Torso of Apollo.” As she writes:

“ARCHAIC TORSO OF APOLLO” is a sonnet. Rilke wrote it in 1908 while working for the sculptor Auguste Rodin. It is considered an ekphrastic of a fifth-century BCE sculpture called Torso of a Youth from Miletus presently located in the Louvre. Mitchell’s translation of it is composed in loose iambics with enough consonance and assonance to say a sonnet-like pattern of end rhyme (ABAB CDCD EFE EFE) has been achieved: head/inside, torso/low, Otherwise/thighs, could/flared, defaced/fur/itself/life, shoulders/place.

Sonnets tend toward completion. Structurally, both the Petrarchan and Shakespearean forms whittle down (4-4-3-3 or 4-4-4-2) and synthetic toward a statement of some kind—the resolution of an argument. Thought arrives in tandem with the feeling of it having arrived. So it is with Rilke’s sonnet. It is also the case that here the ostensibly complete form of the sonnet accommodates the incomplete—broken—body of Apollo which, in the process of its contemplation by “us”—by “you”—becomes complete. And then more than complete. So complete that it obliterates itself out of completion, returning “(y)our” gaze with an injunction of such intensity it eviscerates you and me, the human, the living, the changeable. The torso is not incomplete—you are incomplete. Your manners and perceptions, your knowing, the sense you have of your own life—all incomplete. 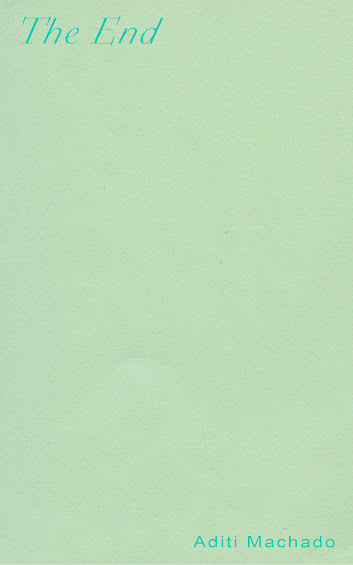 The author of two full-length poetry titles—Some Beheadings (New York NY: Nightboat Books, 2017) [see my review of such here] and Emporium (Nightboat Books, 2020) [see my review of such here]—Machado works a way of reading short poems even while discussing her own explorations into the form of the long poem. I am curious on the idea of her speaking of endings, when her own are so delayed, and so few; and her conversations around both delay and epiphany. As she writes: “Because I teach writing I am often required to help ‘solve’ the problem of a poem’s ending. I no longer use textbooks and attempt to rely as little as possible on the anodyne, increasingly fixed bodies of craft knowledge that continue to get ‘passed’ like DNA down the family tree of writing programs.” This is a remarkable essay, and one that rewards repeated readings; there is simply too much to take in all at once.
Posted by rob mclennan at 8:31 AM
Labels: Aditi Machado, ugly duckling presse