The roof speaks
as light over
the scaped silence.

A cacophony
of shapes
kicks off into sky.

People live here
in the quiet
a day undresses. 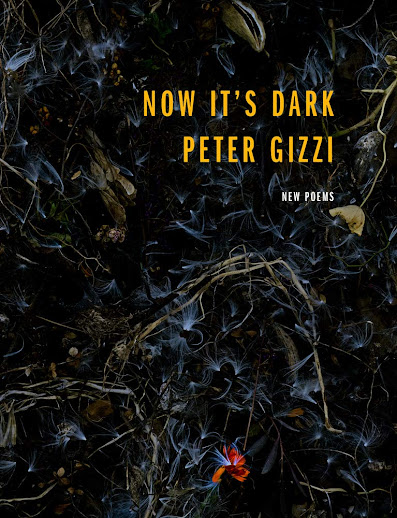 The latest from American poet Peter Gizzi is Now It’s Dark: New Poems (Middletown CT: Wesleyan University Press, 2020), a collection of lyrics composed at the conjunction of light and dark, each simultaneously breaking through and against the other. Composed as a suite of meditative examinations through the extended lyric fragment and the lyric sentence, Gizzi writes of being overcome by dark events and pushing through towards optimism, and examining what remains of the past alongside what we might, ourselves, leave behind. One could see this as a timely set of self-examinations, given the current climate of American politics, impossible to not be seen as a backdrop to one of the final poetry titles released during this particular administration. “And then I found myself when the poem wanted me in pain / writing this.” he writes, as part of “THE PRESENT IS CONSTANT ELEGY.” There is such an ease to Gizzi’s lines, light enough that one might think they could sit on the surface of water; and yet, precision and clarity is not, necessarily, lightness, and lightness and ease do not suggest a reduction in depth. “All I want,” he writes, as part of “SUNSHINE,” “is the word / to reveal the day.”

This is Gizzi’s tenth full-length collection, and I’m clearly out of the loop, having not encountered his work since his fifth full-length collection, The Outernationale, back in 2007 [see my review of such here]. It means I’ve missed out on, among other works, two collections of selected poems: In Defense of Nothing: Selected Poems 1987 –2011 (Wesleyan, 2014) and Sky Burial: New and Selected Poems (Manchester, UK: Carcanet, 2019). As he writes in the title poem: “So I thought I would write a poem. / I thought I would try and make art. / But the chemicals seep into everything.” Further on, in the same piece, writing: “I read every moment is an opportunity for grace / and think every moment is a possibility of art.” This might be a physically small poetry title, but it has remarkable heft.