Sawako Nakayasu, Some Girls Walk Into The Country They Are From

GIRL J COVERED INSIDE
AND OUT IN ANTIMONY

Where the trouble begins is where the outside approaches the inside. A helpful outsider tries to demarcate such distinctions, but gets balled up and unceremoniously rolled away like wandering soot. One is advised not to attempt intervention, especially not if such an attempt stems from what are assumed to be good intentions. Say it again and think twice. Girl J is not a child and does not need strangers to look after her. Girl J has already taken care of her outside. Girl J with antimonials. What happens next. Ingestion has its limitations. Does she want to talk this out with someone. No. Then what. Search for an agent. Said agent shall act as vehicle, conduit, trailblazer, firehose. Said agent shall travel the far teaches of the insides of Girl J, depositing antimony in an even coat. Said agent shall not be paid, compensated, or thanked. Why thank someone for spreading a toxic substance all over the insides of your body. 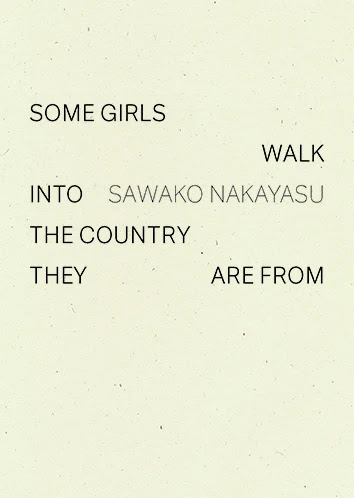 I’m fascinated by poet and translator Sawako Nakayasu’s latest poetry title, her Some Girls Walk Into The Country They Are From (Seattle WA/New York NY: Wave Books, 2020), following books such as Yi Sang: Selected Works, edited by Don Mee Choi (Wave Books, 2020) [see my review of such here], The Collected Poems of Chika Sagawa (Canarium Books, 2015) [see my review of such here], The Ants (Los Angeles CA: Les Figues Press, 2014) [see my review of such here] and Texture Notes (Letter Machine Editions, 2010) [see my review of such here]. As the press release for this new collection offers: “In Sawako Nakayasu’s ﬁrst poetry collection in seven years, an unsettling diaspora of ‘girls’ is deployed as poetic form, as reclamation of diminutive pseudo-slur, and as characters that take up residence between the thick border zones of language, culture, and shifting identity. Written in response to Nakayasu’s 2017 return to the US, this maximalist collection invites us to reexamine our own complicity in reinforcing conventions, literary and otherwise. The book radicalizes notions of ‘translation’ as both process and product, running a kind of linguistic interference that is intimate, feminist, mordant, and jagged.” Nakayasu’s work has long explored the structures, narratives and accumulations of the prose lyric, but the pieces in Some Girls Walk Into The Country They Are From extend the narrative out across multiple voices and perspectives, and questions around translation, writing out a multiplicity of perspectives and poems, as well as including (“featuring,” as the book itself offers) pieces by an assemblage of other poets from her circle of friends: Genève Chao, Lynn Xu, Hitomi Yoshio, Kyongmi Park, Kyoko Yoshida, Karen An-hwei Lee and Miwako Ozawa. The poems play with the term “girls,” switching, riffing and reclaiming from diminutive and slur, writing out just how possible the self can shift, from insults to self-owns, and from intimacies, including friendships, protections, sex and motherhood. “There is a symptom in the proposition when that abundance gangs up,” she writes, in the opening poem, “GIRLS ROLLING THEMSELVES,” head cocks to the heat bending towards both livable and untenable, / the exit grows and grows forgetful of its nature as orifice, hand / slackens in relation, a wrestle of train car, company, one day as if / any other day, or night. Send me their off.” As Nakayasu responds as part of a 2019 interview conducted by Jordan Osborne for the Colorado Review website:

There is indeed a larger project—a book—it’s forthcoming in 2021 from Wave Books, titled Some Girls Walk Into the Country They Are From. In shorthand I refer to them as “the girl poems,” and I am aware of that strange way they draw attention to the word, girl—partly, or exactly, because of the ways in which these texts are very much about girls, and very much not about girls at the same time. It’s slightly similar to the way that I wrote my ant book (The Ants)—those poems, too, are not at all about ants, even though there are many, many ants that populate the book. Both the ants and the girls act as a kind of foil. A foil, and also a form, perhaps better thought of as a conceptual poetic form, one that works on the writing mind to coax the poem forward. I imagine it’s a bit akin to the way some people write Shakespearean sonnets over and over—by having a set of fixed parameters, a certain freedom emerges. My parameters happened to be ants earlier, and then girls (and earlier, texture)—whereas others had ABAB, CDCD. There is nothing as liberating as a good constraint.