Someone No One Everyone Anyone

and I put all this blood in, but things just get sticky
No one’s a mess anyone

wants to pick up after, so I marched my ass down
to the shack that flashed

LIVE MODELS in red and asked if they needed
someone good with light.

Everyone was bronzed
and someone was covered in glitter.

lower” and motioned to someone
who shone a weird green

light so high
the shadows made everyone’s eyes onstage look

seem tentacled with darknesses.
I tsked, “That’s no way to shine a body.” 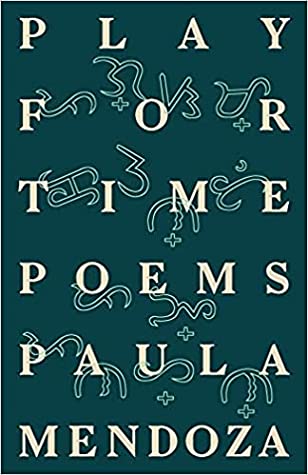 Selected by Vijay Seshadri as the winner of the 2019 Gaudy Boy Poetry Book Prize is Salt Lake City, Utah-based poet Paula Mendoza’s full-length debut, Play For Time (New York NY: Gaudy Boy, LLC, 2020). According to the notes at the back of the collection, the Gaudy Boy Book Prize “brings literary works by authors of Asian heritage to the attention of an American audience. Established in 2018 as the imprint of the New York City-based literary nonprofit Singapore Unbound, we publish poetry, fiction, and literary non-fiction.” Previous winners of the Gaudy Boy Poetry Book Prize include Autobiography of Horse by Jennifer Sang Eun Park and The Experiments of the Tropics by Lawrence Lacambra Ypil, with winners of the Gaudy Boy Fiction Prize including The Foley Artist by Ricco Villanueva Siasoco, and Malay Sketches, by Alfian Sa’at.

The short poems that make up Play for Time reveal themselves slowly across a broad lyric, organized together as a loose-suite of poems of exploration, and beginning. “My theory stiffens your discipline. / Slavishly,” Mendoza writes, as part of “Dehelixing Adora: A Colonial Kantá,” “this thought pulverizes love // into something I can breathe. / I can’t breathe.” Mendoza’s poems are full of teeth, of body; animalistic fierceness and the sea, the shore; the flood waters up against the land. Her poems are lyrically narrative and very physical, writing on the purge, colonialism and reclamation. “Because these daughters of mine,” she writes, to end the poem “Lucy, Again,” “risen from the dead white / myth, expect dinner on the table. And meat is meat is meat.”