A son of my
first mind, was
a leaf, wind on
raw skin, fist
of one thirst
upthrust.
Roars
snowmelt where
hemlocks over-
hanging shiver
motherlove.
Sur-
round of what
no one had
made, made
of what no
surround
had. 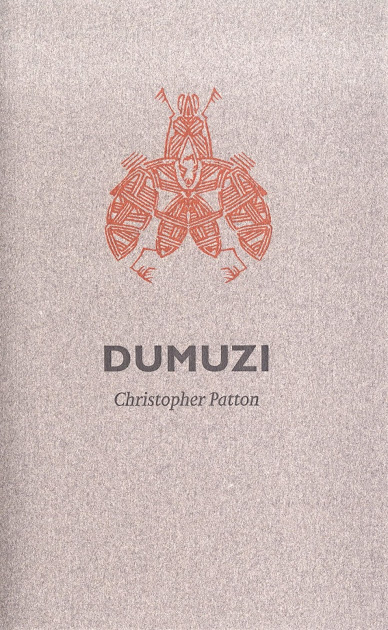 Canadian poet Christopher Patton’s latest title is Dumuzi (Kentville NS: Gaspereau Press, 2020), a a poetry collection that follows his poetry debut, Ox (Montreal QC: Vehicule Press, 2007), as well as his Medieval translations Curious Masonry (Gaspereau Press, 2011) and Unlikeness Is Us: Fourteen from the Exeter Book (Gaspereau Press, 2018). Having established himself as having an interest in exploring and reworking older source texts, Patton’s Dumuzi appears a blend of those two earlier threads of his publishing history, composing a translation inasmuch as Oh Brother, Where Art Thou? can be seen as a translation of The Odyssey; both rework from the bones of their original sources, and through the creation of a new and original work, uncover previously unseen meaning and depth from such ancient texts. Dumuzi tears apart and reworks old Sumerian myths into an assemblage of lyric fragments and sketches, as he explains as part of his essay “THE GOD DUMUZI AND THE POLICE FORCE INSIDE”: “I see now that my pleasure in pattern for its own sake, there on the signal-noise threshold, was an approach to translation. I was working with the Sumerian myths of Inanna and Dumuzi. Their stories are liturgically redundant, enough so to alter your time-sense, when you’re inside them. And a persistent theme of the poems is the agon, if you like, of form and formlessless.” Dumuzi reworks an ancient tale through the building-blocks of language itself, opening with a short suite of establishing poems to set the foundation of his narrative before the narrative fractures and fractals out in multiple directions. It is as though Patton works translation, mistranslation and misheard translation, utilizing the loose structure of the ancient Sumerian stories and utilizing his play from those ancient bones. As he writes in his “NOTES ON IT,” at the end of the collection:

Out of Sumer, Dumuzi, fertility god, crushed king. His other, Inanna, she of increase, went down to their underworld for fun + profit; why for real though is very hard to tell. On her way up + out, guided by hyperathletic postal demons called galla, and told one’s got to take her place, divine rule of bloodless metamorphosis they sez, who’s her eye land on but her arrogant lovely benighted D. Take this one sez + game afoot. Flees. Caught. Ta’en in chains. His butter churn’s broke + an empty windy sheepfold & vulva; both have place in the formless field of his shining care. Later the woman find his body unmoving outside citygates. Gethtinanna, his sister & my book’s hero, sez I will take his place, ½ a year underearth, + so she does.

“finds / him at Uruk under an old apple tree ex / pounding wildflowers,” he writes, in “QUEEN OF SKY EARTH + UNDEREARTH,” “one on Salt Spring I loved over all the others / a king no a gala—I am / not kidding!” In a collection that structures itself from the baseline of the fragment, Dumuzi utilizes song and scraps, document and sketches, myth and the building blocks of story expansive enough to become a new kind of telling, one that seeks the half-spoken and half-hidden, and the smallest grain of salt along the skin. As part of the poem “OMNIA QUAE SUNT, LUMINA SUNT,” he writes:

You never see fog at a distance said. You’re in it—no
distance. You’re outside it—not fog. To say the fog climbs
the hills is to speak from somewhere you cannot stand.

Change pens and the image of nature changes.