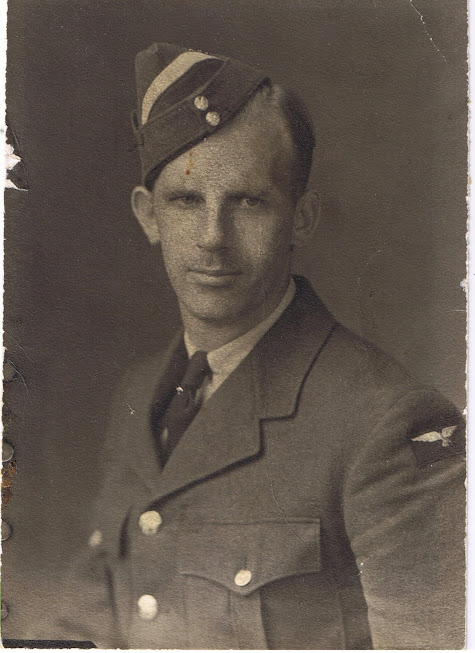 Thanks to family archive, discovered in a trunk belonging to my late maternal grandmother after my mother died, I’ve been able to do a number of these Remembrance Day posts over the years [my great grandfather JJ Swain’s WWI postcards home; undated army photos from the Swain/Page archive; WWI-era letter home from Elmer Cassady to her sister, my great-grandmother Caroline Cassady Swain], all of which have focused to-date on my mother’s maternal grandparents and their family (the McLennans were all farmers), but this is the first I’ve been able to do from my mother’s paternal line, her uncle Donald Page, who died when she was only two years old. I don’t know much about Flight Sergeant Donald Frederick Page, brother to my maternal grandfather, George William Page (1910-1972), apart from the fact that he died as part of flight training off the coast of Angle, Pembrokeshire, Wales on November 4, 1942.

Born May 1, 1913 in Cobourg, Ontario (his parents had emigrated from Ramsgate, England in 1907, where the Page family had been producing “Ge:rges” across multiple generations, which continued as well after their arrival in Canada). Donald was the second of four children born to my Ramsgate-born great-grandparents—Freemason, tuba player and World War I Sergeant George Edward John Kibble Page (1886-1960) [see my post on him here] and Annie Farman Friend (1884-1960)—after my grandfather, George William, and further siblings Frederick Sydney Page (1914-1916), who died of rubella in infancy, and Olive May Page Phillips (1924-2010).

Family lore tells that he was on a plane during training that was flying low across the water, unable to lift up in time, thus crashing into land. Although a web forum I found online did offer this:

There really aren’t any stories I’m aware of in the family around him, although my grandmother kept a framed photograph of him (with red poppy, attached to the frame) in her sitting room, and later, her room at the nursing home, for the remainder of her life. According to WikiTree:

Member of RCAF killed in plane crash in Wales, during WWII. Was a gunner-radio operator. Did not marry.

From his attestation papers, he quit high school in 1930 during the worst part of the Great Depression when there was no work in Southern Ontario. He went out west in 1932 and maybe even rode the rails. He worked as a farmhand in Alberta, likely for room & board with little for wages, then came back east in 1936, probably home for awhile. His record shows him in Larder Lake from 1937-39 until he enlisted. Larder is on the namesake lake on Highway 66 half way between Kirkland Lake and the Quebec border going to Rouyn-Noranda. Larder is now just a bedroom community to Kirkland Lake but in his time, there were a number of small gold mines operating. He was a driver for a grocery store and also drove taxi. 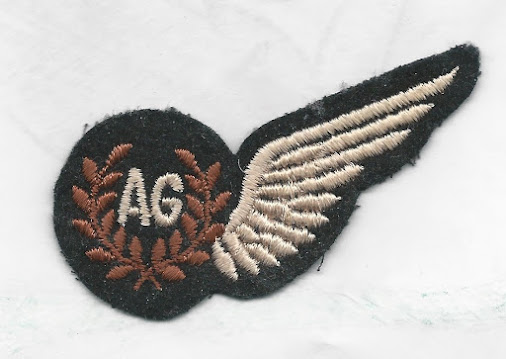 During the first round of house-cleaning Christine, my sister and I did of the homestead, after our father died a few months back [see my obituary of him here], we found some boxes left over from our grandmother’s house that included numerous items, including these wings, most likely belonging to Donald. I mean, who else? My grandparents’ fifth child, my uncle Donnie (Donald Roger Page 1942-2015), born barely three weeks before Donald was killed in Wales, was named after his uncle.

Donald Frederick Page, Flight Sergeant, R/69485, Royal Canadian Air Force. Donald was the son of George E. Page and Annie F. Page, of Cobourg, Ontario, Canada, and served as a Wireless Operator/ Air Gunner with 407 Squadron, Royal Canadian Air Force. No. 407 Coastal Strike Squadron was formed at Thorney Island on 8 May 1941, first training on the Bristol Blenheim. It was one of seven RCAF units to serve with RAF Coastal Command, and from September 1941 to January 1943, the squadron operated as a strike squadron attacking enemy shipping with the Lockheed Hudson. Donald was one of four men killed when their Lockheed Hudson crashed on 3 November 1942. He is buried at Angle (St. Mary) Churchyard. He was 29 years old.

Thank you so very much for sharing this information, Rob. I remember Auntie Olive telling me that his plane was returning from a search over the English Channel. They misjudged the height of a hill (can't remember if she said it was due to fog), crashed & several members of the flight crew were killed instantly. As you mentioned, Uncle Don survived, but died & was buried on Nov. 7,1942. She always remembered my birthday, as I was born exactly one year later - Nov. 7th, 1943.

Olive also sent me several pictures. One was the last time they saw Uncle Don before he was shipped overseas - Dec. 6th, 1941. Also included were some pictures of her & Uncle Don & Daddy. Daddy & Olive are dressed in Uniform, but must be of Reserves, or Home Front? Don was in his full uniform.