Fred Wah, Music at the Heart of Thinking

Don’t think thinking without heart no such separation
within the acting body takes a step without all of it the self
propelled into doing the thing (for example, the horse) and
on the earth as well picking up the whole circuit feet first feel
the waves tidal and even outside to moon and sun it’s OK
to notate only one of those things without knowing fixed
anyway some heart sits in the arms of 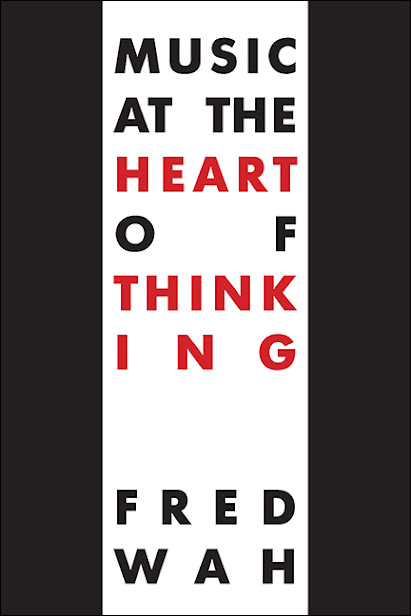 Having appeared as a thread through his work, including through multiple full-length poetry titles, is Vancouver poet Fred Wah’s Music at the Heart of Thinking (Vancouver BC: Talonbooks, 2020), a new volume collecting the one hundred and seventy numbered poems in this sequence-to-date for the first time. The first ten poems in the sequence, as Wah’s notes acknowledge, were “written for and published in an issue of Open Letter (5.7 [Spring 1984]) on notation,” a project originally prompted by bpNichol and Frank Davey (there are at least three Open Letter issues “on notation”). The original handful of poems might have been prompted by an idea on notation, but the poems quickly evolved into a sequence of responses, whether composed as individual pieces or short groupings of pieces, to music, visual art, theory and poetry. The first sixty-nine pieces later appeared as Music at the Heart of Thinking (Red Deer AB: Red Deer College Press, 1987), with a subsequent thirty-five appearing as part of Alley Alley Home Free (Red Deer College Press, 1992). Subsequent pieces collected in the volume originally emerged through numerous literary journals, festschrifts, anthologies and further of his trade titles, existing as a thread across the length and breadth of his work since, encompassing nearly forty years of composition. There is something fascinating about a poetry title composed across four decades, especially one that emerges out of a particular thread excised from the rest of his work. How does this one thread exist in relation to other pieces he’s worked on, across that same period? Perhaps at some point down the road, a similar volume might compile Gil McElroy’s ongoing “Julian Days,” another sequence of poems focusing equally on “response” as well as an attention to form, language and breath. To pull out and compile a single thread, what is the portrait that might emerge? As Wah writes to introduce those original pieces in Open Letter:

THE FOLLOWING ‘DRUNK’ WRITINGS ARE NOTES FOR TALK. IN THE explication of these estranged pieces lies possible coherences for some sense of writing as a notation for thinking as feeling. The difficulty is literal and intentional. I’m wary of any attempt to make it easy. ‘language [the true practice of thought]’ Kristeva says or Jack writing yesterday with reminders all through his letter, mind stumbling over itself not recognizing stuff ‘till later,

That last part of your letter makes me remember Wittgenstein’s saying ‘don’t think, look.’ And if the ‘dogmatic order’ is only in the para-text of perception, then … the syntax of thinking in its (linguistic) periodicity is always going to elide that bump or ‘nipple’ Juan de la Cosa’s eyes included (but you’d have this already from Henry Lee and Benjamin L.).

And then the gates open to the ‘double,’ the binary. Emic. Dialogic.

In many ways, Wah’s “Music at the Heart of Thinking” is built in a manner opposite to a project such as Winnipeg poet Dennis Cooley’s impossibly-large and ongoing “Love in a Dry Land”: where Cooley’s is a single project nearly thirty years in the making, with threads excerpted for book publication, Wah’s appears as a single, occasional and ongoing thread. His is a sequence of occasionals sprung from a shared impulse of improvisation and response; a project that adds poems as they are needed, potentially for as long as he requires them. The idea of “drunk writings” he mentions in his original introduction, is something he referred to in that first trade volume as “drunken tai chi,” the idea of a master craftsman deliberately compromised, forcing themselves to work more intuitively, and allowing the unconscious to take over. In the note at the back of the current collection, he continues that particular thread, writing that “The ‘MHTs’ became, for me, a niche for a compositional attention I wanted to explore in particular ways. I had been attracted to the prose poem through my attempts at the utanikki, the poetic journal. Within the prose poem I was interested in upsetting the tyranny of the sentence as a unit of composition. The resistance to closure and syntactic predictability implicit in contesting the sentence is a dynamic also shared with the long poem.” As his opening note to the current volume, “One makes (the) difference,” begins:

To say: “I don’t understand what this means,” is, at least, to recognize that “this” means. The problem is that meaning is not a totality of sameness and predictability. Within each word, each sentence, meaning has slipped a little out of sight and all we have are traces, shadows, still warm ashes. The meaning available from language goes beyond the actual instance of this word, that word. A text is a place where a labyrinth of continually revealing meanings are available, a place that offers more possibility than we can be sure we know, sometimes more than we want to know. It isn’t a container, static and apparent. Rather, it is noisy, frequently illegible. Reading into meaning starts with a questioning glance, a seemingly obvious doubloon on a mast.

The “Music at the Heart of Thinking” poems, a project that emerged out of Wah’s attention to improvisation and response [something we discussed as part of an interview I conducted with Wah for Jacket2], appears to be the thread of his work where he more overtly explores the possibilities of improvisation alongside ekphrastic movement, allowing the poems a looseness, and trusting them to land as they should. Set together for the first time, the ebb and flow of the series is interesting, as the poems expand and contract, reach out and retreat; from compact prose poems to sentence-stanzas, exploring both the breath-line and the poetic sentence. “The plateau of the poem,” he writes, to open “127,” “pulling a story from a fire / smouldering under foot / on a periphery of words / as things while sentenced [.]” The series also evolves from more general explorations to specific responses, whether to specific people, artworks or thinking, such as “Music at the Heart of Thinking Eighty-Something,” after Christine Stewart, that includes: “Where to go to get the word rubble now or as you say fair / producing sky weather may eventually.” Wah’s has always been a poetic simultaneously engaged with breath and quick thought, language and deep meditation on being, identity and theory, and Music at the Heart of Thinking provides an ongoing example of just how powerful a master can be, even as he allows himself the quick line, the quick sketch; allowing himself to relax, and let go.

On the weekend I got into anger talk about landscape and the hunger of narrative to eat answer or time but space works for me because place got to be more spiritual at least last felt now this water/genetic I suspect passions like anger suprafixed to simply dwells I mean contained as we speak of it believe me I’d like to find a new word-track for feeling but language and moment work out simply as simultaneous occurrences so I don’t think you should blame words for time-lapse tropism e.g. ethics is probably something that surrounds you like your house it’s where you live