Gina Myers, Some of the Times

New city same shit
Moving through
the streets
pre-fall golden
in late afternoon
sunlight / bright red
crumbling brick
& shoddy griffiti
asks freedom?
Each year I fight
& each year
the things that hold
me back feel stronger
Shirking the day’s
responsibilities
to sit by the river
this afternoon
I wouldn’t give this
up but no it’s not
freedom. (“PHILADELPHIA”) 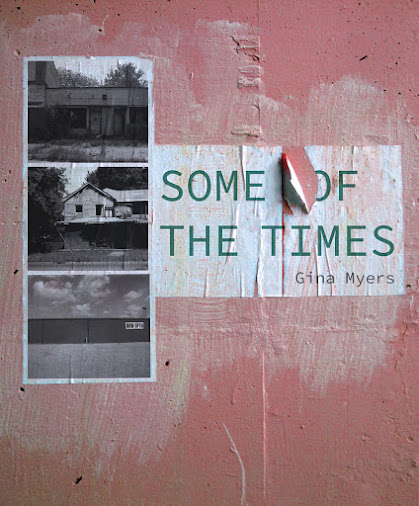 From Philadelphia poet Gina Myers comes her third full-length collection, Some of the Times (Baltimore MD: Barrelhouse Books, 2020), following A Model Year (Coconut Books, 2009) and Hold It Down (Coconut Books, 2013), two books I now regret having missed. Some of the Times is a collection of first-person lyrics that explore her lived experience and geography, that being the city of Philadelphia, a city that to her was fairly new at the moment of composition. Most of the poems are shorter, almost clipped, but provide the sense of being very much part of a larger structure, suggesting the collection less an assemblage than a suite of contained lyrics. Myers writes on paying rent, police brutality, tenuous employment, chronic illness, labour camps in Cuba, baseball games and thunderstorms. Her poems occupy the ground level of a city in ruin amid dangerous heat. There is a particular flavour of working class ethos that permeates the culture, and the poetry, of Philadelphia that is reminiscent (positively, of course) of work I’ve seen over the years out of Hamilton, Ontario, or even the border city of Windsor. Myers aesthetic, of course, is very much that, but blended with an influence from the lyric of the New York School of Poets, something she wrote about in her short 2016 piece “Is there room in the room that you room in?” for the ottawa poetry newsletter:

In an interview, Eileen Myles defines what it means to be a New York School poet: “As an aesthetic it means putting yourself in the middle of a place and being excited and stunned by it, and trying to make sense of it in your work.” This, putting one’s self somewhere and being excited to be there despite all that being there involves--the joyful as well as the heartbreaking and ugly--and trying to make sense of it, is what poetry is for me. And I am happy to be here. And I’m happy you’re here too.

The poem “PHILADELPHIA,” a longer sequence near the beginning of the collection, sits as a poem of arrival and of placement, rife with self-dismissal and regret: “How much of / an asshole am I / that I live / somewhere / for a month / & think I can / tell its story / Every day there / is news of / a new police / brutality / What use / is love / right now?” According to the notes at the back of the collection, the poem was composed from August to October, 2014 (which is, curiously, exactly during the time I was in Philadelphia, and was first able to meet Myers). In a conversation with Krystal Languell, posted at Entropy on September 26, 2017, Myers discusses the poem, which had appeared earlier that same year as a chapbook with Barrelhouse:

Philadelphia was written within the first two months of my move to Philadelphia, which was a time of great uncertainty and instability for me personally. The book wrestles with that instability along with wrestling with larger social and political issues. The world outside of me has remained to be uncertain and unstable, certainly hostile and perhaps increasingly so under the current government–or at least whatever veil of “democracy” and “justice” there was has been lifted. In that sense, not much has changed from the time of writing the book. However, personally, I am feeling more settled in, more at home here in Philly, though I’m reaching my three year mark, which is when my wanderlust usually comes on strong.

There are elements of influence in her first-person explorations of self and the crumbling infrastructures of city and culture, from Eileen Myles to fellow Philadelphia poet ryan eckes; structural echoes to her poems that run similarly down the page and through the excess of sirens, unkempt streets and the ravaged potential of human accomplishment. This is her restlessness, her “wanderlust,” as she calls it, alongside a hardscrabble lyric, one pulled together from lyric scraps, struggle and observation. “I don’t need your theories,” she writes, to close out the poem “4.18.14,” “to understand my lived / experience. There is / an anger I carry / inside I will never / let go of. Something basic / to hold onto while everything / else disappears.”