Months later, an insight arrived. I had grown up in such a language—my Dutch was of its land, while English, where I had learned it, was an invasive species imposed by settlers. My own ancestors had been equally oppressive: in Indonesia, in Manhattan, in Suriname, in the Caribbean, and in South Africa, among other places. Apartheid, the euphemism that means separateness, is perhaps the most internationally recognized Dutch word. Of South Africa’s eleven official languages, Afrikaans—the independent language that formed during colonial occupation, merging Dutch with influences from Khoikhoi, Malaysian, Portuguese, German and French—was at first considered a dialect between owners and slaves. My language was unequivocally guilty, but it also mattered that I’d acquired it on the flat turf of its formation.
Until then I had attributed the sense of detachment I experienced in English, that sensation of having a tongue infused with lidocaine, to the language’s belated integration in my life. Now I was in doubt; perhaps English felt less real because I was speaking it on the wrong land. Its sounds and constructs had nothing to do with the local earth, and neither did French—it was absurd for two languages to span such an enormous territory, and to sound so similar from the slopes of the Rockies to the coast of New Brunswick. Names and terms had ben placed on this land like a kind of linguistic asphalt; they didn’t have to correlate with what was underneath, they only had to be steamrolled over. (“elders / elsewhere”) 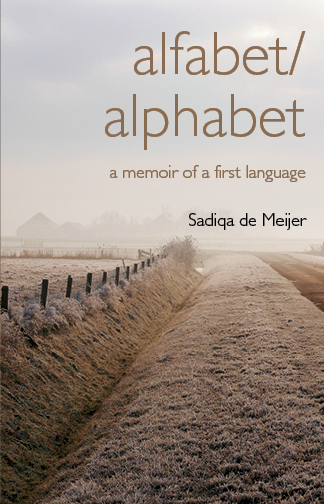 I’ve been slowly moving through Kingston poet Sadiqa de Meijer’s utterly fascinating alfabet/ alphabet: a memoir of a first language (Windsor ON: Palimpsest Press, 2020), composed as an exploration of how language thinks and swims, through her ongoing experience with moving physically from one language, culture and country into another. In a suite of short essays arranged alphabetically by title, she narrates and explores the shifts between the Dutch language, from her origins in the Netherlands, to English-speaking Canada, working her way through multiple implied and inherent differences, many of which she has only begun to fathom. She writes of the alphabet, the bare bones of the language itself, one against another. As she writes of the openings of that lengthy transition: “In Canada, my clothes were odd, and I had no idea what malls or Cabbage Patch Kids or gimp bracelets were, and when I tried to be funny with my peers the silences were awkward and prolonged. I felt an urgent wish to restore my own significance. I read everything I could—flyers, packaging, signs—and listening to the mumblings of my classmates and teachers. Willing myself to make the same sounds, I strove to regain a sense of fluency, of language as my element. That was all I had in my sights; it didn’t occur to me that this was also the start of a slow and nebulous loss.”

The author of two full-length poetry collections—Leaving Howe Island (Fernie BC: Oolichan Books, 2013) [see my review of such here] and The Outer Wards (Montreal QC: Signal Editions/Vehicule Press, 2020) [see my review of such here]—de Meijer’s biography at the back of the collection offers that she “was born in Amsterdam to a Dutch-Kenyan-Pakistani-Afghani family, and moved to Canada as a child.” There is a lot of geography to unpack in that simple array of words, and a complicated sequence, well before the dislocation of arriving into Canada. The effect of her shift from one cultural space into another reveals itself to be deeply felt, and lifelong. This is in part, no doubt, due to the fact that it was not a journey precipitated as an adult, but one made when she was twelve years old; during such a formative period, felt down to the foundation of how she speaks, thinks and breathes, and interacts with herself and with the world beyond. Particularly curious is how her migration into English allowed her new pathways back into certain of the dialects of her native language  “English was both a dominant and an eccentric language,” she writes, as part of the “verzen / verses” section, “no wonder that it had been adapted and interpreted by various groups to make its own local sense. Even in the culture of three that comprised my brothers and I, we improvised on its strangeness, usually while we played with LEGO in our basement.”

Reading her descriptions of standing at the teacher’s desk during sessions of learning English in her newfound country, it reminds me of witnessing another during my own time as a grade school student; watching a classmate and relatively new arrival from the Netherlands go through similar one-on-one sessions with our grade five, as the surrounding students, myself included, worked on other projects. What becomes fascinating about this particular memoir of arrival and departure is in how she focuses the book not on family or culture or dislocation, all of which is certainly featured, but through the very root of language, and the differences between them. And the shift in perspective offers her, as well, fresh considerations on her home language, and home culture, realizing the light and dark elements of both sides of this new equation. As de Meijer offers in the section “gastarbeider / guest labourer”:

“Never erase, it doesn’t really work,” my favourite art teacher said to me once, and I’ve learned she was right; the sound of Dutch persists like a faint carbon shadow in my English. It deepens after I’ve spoken to my mother, or when I’m breathlessly eager to recount something, or when I speak of anything that happened “over there.” Very rarely, people guess my linguistic origins—once it was a man who had asked for spare change, and then heard me apologize and wish him good luck.