As if the self were an herb you could gather.

I’m not a parade person.

ONE DAY THE INVISIBLE MANIFESTS.

The poor will die.

“Pimples are the lords way of chastising you.”

If true consciousness lies below the conscious level.

A duality that means both of us.

A small percentage of men only respect you if you yell at them.

The free packets of coffee stopped showing up. 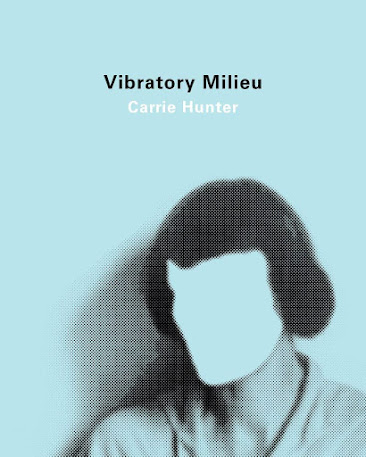 I’d been eager to get my hands on San Francisco poet, editor and chapbook publisher Carrie Hunter’s third full-length poetry collection, Vibratory Milieu (Brooklyn NY: Nightboat Books, 2021), following her prior collections, The Incompossible (Black Radish Books, 2011) and Orphan Machines (Black Radish Books, 2015) [full disclosure: she has also published a chapbook with above/ground press]. Vibratory Milieu is a high-speed polyphonic lyric suite that somehow feels simultaneously an extension of her prior work, and yet, leagues ahead in terms of structure. Composed in five sections—“Lysunekes,” “Carrie,” “Per Una Selva Oscura,” Oppositions are Accomplices” and “Vibratory Milieu”—Vibratory Milieu is a collage of fast-moving voices, quotes and directions that manage to pause, speed up, rush and hold still, eventually developing a hyper-focused through-line. “The red lettering has been painted over with yellow.” she writes, in the first section. “As we get older, we see history more clearly.” How does one read a poem that moves in all directions simultaneously? Hunter blends theory with pop culture, block text and exposition, running roughshod across narrative into seeming-chaos, a cacophony that bleeds into and across multiple references, including her Stephen King-created namesake, Carrie White, from his novel Carrie (1974), a character portrayed multiple times on stage and screen, most memorably by Sissy Spacek in the 1976 film, and Chloë Grace Moretz in the 2013 remake. As Hunter writes to open her second section, “Carrie”:

YOUR TENDENCY TO DWELL IN THE PAST COULD BE
USEFUL TO US.

Wanting something and insisting on it—into the void, forever, alone.

In the dream, the teacher says : just one class can turn your mind
completely vertical.

His sexual noli me tangere.

Maybe I can have my muffled heart back.

We had pigeon problems.

“and the raven was called sin”

Maybe everything I dream is geology.