D.A. Lockhart, Tùkhòne: Where the River Narrows and Shores Bend

These Songs We Sing, We Sing Them for Ourselves
after Marvin Gaye’s “Inner City Blues,
(Make Me Wanna Holler)”

Our Neon chugs through the dirty July heat and it is all smooth like lake bed when the water pulls back before striking. What isn’t rotten is peppered with hìtkwëtët, tuwchalakw, and këlëkënikànakw. It all moves by just fast enough to make this stretch of creation feel like Hollywood as seen on an RCA twenty-seven-inch cathode ray tube television. Street and sidewalks empty for lack of below union pay extras and the sagging bits of buildings strong enough to outlast rebellion and neglect. And you think this ain’t livin’, this ain’t livin’. Because everything from behind the wheel is a dream you have no part in. and then it is the new box and glass and still rise like moon shot rockets. Each new combusted shaft of new pre-fabbed high rise looks only upon itself, searching the sky above for a god they haven’t heard, nor necessarily believe in. And here we rest. Upon the one great gift we walk upon. Holler aloud our love. Holler it. Await the response.

The latest from poet and fiction writer D.A. Lockhart is the poetry collection Tùkhòne: Where the River Narrows and Shores Bend (Windsor ON: Black Moss Press, 2020). Composed with an introduction, opening poem and two sections, Lockhart predominantly utilizes English-language adaptations of Japanese forms, specifically influenced by those who utilized the same as a way to explore ecological concerns. As he writes in his introduction:

The forms used here play homage to what could be seen as a more environmentally aware moment and motion in North American poetry. These are moments and motions that saw the adoption of experimental and concrete poetry as an underpinning of metaphor and occasion for writers. These poems represent the satori and glimmer moments of revelation that lie at the heart of a more rooted way of living with the land. I trace my roots as an ecologically-centred writer through the works of notable American poets such as Philip Whalen, Gary Snyder, and Gerald Vizenor. All of them poets and thinkers that understand the centrality of creation to the essence of our lives. And in our world imperiled by the damage done to the collective planetary climate, I see the rooted aspects of these forms important to explore. 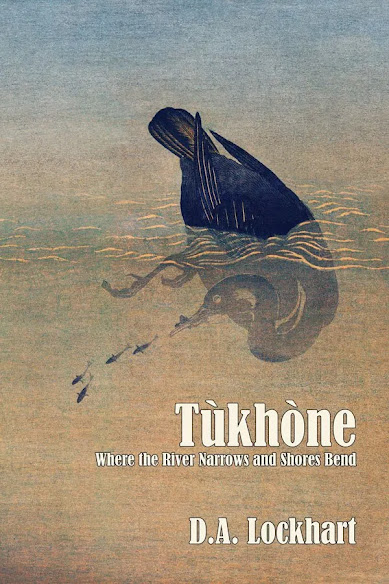 After the opening poem—“That We Shall Move in Grandmother’s Light”—Lockhart structures two sections: “Ntakiyëmëna,” a section of thirteen poems, each composed out of a sequence of haiku-stanzas, and “Kityènay Asuwakàna,” a section of seventeen poems composed as haibun. “Cold light teases / old snow. How salt crystals / glimmer in spring sun.” he writes, as part of the poem “Chahkoll Kishux,” a poem subtitled “Frog Moon.” Given the limitations of English in the haiku form (adapting seventeen meanings, as I understand it, in the original Japanese into seventeen syllables in the English), the constraint of his choosing haiku, even in sequence, is an extremely tight constraint (and I say this as a fan and admirer of those who regularly work the compact form, whether Cameron Anstee, Mark Truscott, Gary Barwin, jwcurry and Stuart Ross, as well as the late Nelson Ball). This poem, “Chahkoll Kishux,” for example, accumulates eight haiku-stanzas, yet focuses on the briefly-sketched imagistic description of a particular set of scenes. The scenes are set, and described. The scenes are. Admittedly, there is a kind of zen-calm to the haiku-sequences, allowing description to unfold, quietly, each step in turn. In this first section, Lockhart writes a chorus of thirteen different moons, writing his “Falling Leaves Moon,” for example, the poem “Pënipahkihëleyòk Kishux,” as: “Purple sky above / stop light. Red eyes / flitter in puddles. // Above creation / hunter’s dog catches bear / sëpi shukël turns red.” As his introduction offers, “the cycle of haiku utilizes the movement of time measured in the passing of Lenape full moons. This usage mirrors much of the traditional means to organize Japanese haiku collections. This method of organization speaks to the rooted matter of many non-western Indigenous cultures. It highlights how even time itself originates from creation.” Think with colour, each moon is provided its imagistic description, its pointillist sketch.

And yet, I find it is in the second section, where he utilizes the haibun, where the book really begins to sing; where he allows himself more of an opportunity to open up the cadence, expand the point form of the haiku into a broader lyric. “Let these words come in as if fog from the long absent marshes to our / south,” he writes, to begin the poem “This Earth We Touch, At Rest, In Motion,” a poem “after John Lee Hooker’s ‘Carwling King Snake,’” “coast up the river past bridge moornings, shuttered steel mills, / piles of asphalt rocks and road salt.” There haven’t been many Canadian poets over the years to play with the haibun, although some examples I’m aware of would include Fred Wah in his Waiting for Saskatchewan (Winnipeg MB: Turnstone Press, 1985), or more recently, Ottawa poet Chris Johnson. The poems riff off specific songs from Detroit’s lengthy history as a music capital, from pieces by Marvin Gaye, MC5, Aaliyah and The White Stripes to John Lee Hooker, Bob Seger, Eminem and Smokey Robinson. The poems sing and stretch and evoke, wrapping up the collection as a lyric of geography, belonging and influence. Tùkhòne: Where the River Narrows and Shores Bend is a poetry title geographically and culturally situated, writing an acknowledgment to the land, the peoples and its polyphony of song.