a crack competes with the window
with a view of nighttime plus the loose ends
and colourful scholars, pastoral landscapes
tumbling forward and back
an improvisation of skies, something wistful
crescendos, the probability of a pause
meticulous groupings, traffic
trademarks adjacent to plastic tubes
it can only happen to countless objects
composition, courage
winded on water (“Propositions”) 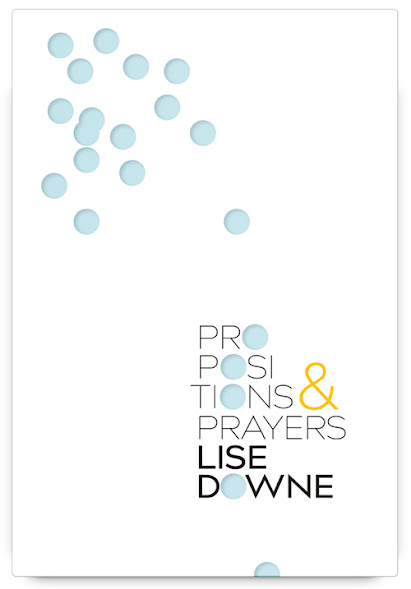 Toronto poet, visual artist and jewellery-maker Lise Downe’s latest is Propositions & Prayers (Toronto ON: Book*hug, 2020), a collection built in two sections: the poem suite “Propositions” (an earlier version of which appeared as an above/ground press chapbook) and “Prayers,” an assemblage of short lyrics. As I’ve said prior, Downe is a poet of big ideas and phrases, exploring the possibilities that poems allow in such small spaces they become impossibly large. The author of the prior poetry collections This Way (Book*hug, 2011) [see my review of such here], Disturbances of Progress (Toronto ON: Coach House Books, 2002), The Soft Signature (Toronto ON: ECW Press, 1996) and A Velvet Increase of Curiosity (ECW Press, 1992), Downe is attuned to the small moment and the compact space—akin to poets such as Mark Truscott and Cameron Anstee—but works to stretch those same moments. Through her poems, it is possible to simultaneously experience the smallest particle alongside the bigger picture. As in the example of the first section, those compacted moments build upon each other, from one dense lyric to the next: “for once a missing element and his right arm / overcast skies, foreboding also a language / you knew, the horizon between longing curved / a few rushes smitten but paler / one could have rowed, vanished in an instant [.]” Her ongoing work exists within that curious space amid the language/experimental poets (think of the specifically-abstract language of Steve Venright or Christopher Dewdney, against the more grounded language-lyrics of Margaret Christakos or Stephen Cain) while simultaneously employing a compact minimalism against an overarching expansiveness. Her poems unfurl, slowly and carefully, and in even the most abstract directions her language might take, it is a head and a heart that are very much in control, directing her language into further possibilities. Hers, in the finest sense, is a trusted, intuitive craft. In her 2012 “12 or 20 questions” interview, composed not long after her prior collection was published, she spoke to the accumulation of poems; and how her poems, and thus, her manuscripts, are constructed:

A poem begins with a few words, a phrase or a line; what follows is a composition of response and propulsion. I don’t write with a specific idea or subject in mind.
To date, all my books are collections of pieces that coalesce into a book. I’ll become aware of qualities in a body of poems that have a variety of different but related concerns, and they are then gathered together under one cover.