[this review originally appeared in #68, the "small press" special issue, of filling Station] 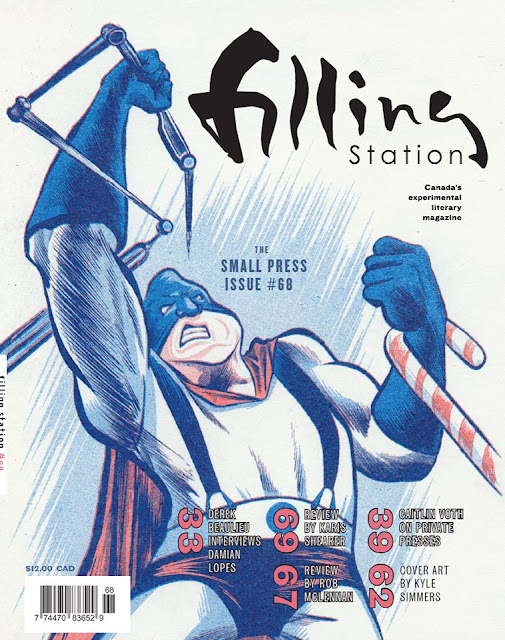 Chuqiao Yang REUNIONS IN THE YEAR OF THE SHEEP
BaselinePress, 2017

I’d been hearing about the work of Vancouver poet and editor Shazia Hafiz Ramji for some time [see my recent interview with her here], finally able to get a copy of her first chapbook, PROSOPOPOEIA, a collection of fourteen short, dense lyrics [and: in mid-stream while composing this review, she won the Robert Kroetsch Award for Poetry, which means her first full-length trade collection will appear next year through Insomniac Press]. Moving easily between styles, Ramji’s lyric engages the precision of the line break against the flow of the prose poem. “We were warm in the summer grass,” she writes, to open the poem “Change of Scene”; “fireworks on mute. One of us / arrowed out towards the question of our death. // Their faces were brick facades organizing under the sunbulb. // A thin voice of silver chalk spoke and changed the scene.”

According to Wikipedia, “prosopopoeia” is “a rhetorical device in which a speaker or writer communicates to the audience by speaking as another person or object. The term literally derives from the Greek roots prósopon ‘face, person’, and poiéin ‘to make, to do’.” In this way, Ramji’s fourteen poems are reminiscent of Ottawa poet Stephen Brockwell’s explorations on voice throughout his own small handful of poetry titles; both poets speaking, if not precisely for, but through. In the space of such a short collection, the poems themselves accumulate into a kind of collage, and make me curious to see what she can accomplish with her larger structure. I am very much looking forward to her first collection.

Toronto poet (by way of Windsor, Toronto, Saskatoon, and, originally, Beijing) Chuqiao Yang’s [see my recent profile on her here] long-awaited first chapbook is REUNIONS IN THE YEAR OF THE SHEEP, a collection of precise and arresting lyrics, composed as meditations on travel, relationships and family. A curious blending of dreamy stream-of-consciousness and precise narrative description, Yang’s poems float across the lyric as a sequence of short studies, exploring the ways in which interacting with travel, home, family and others can’t help but alter us; her poems predominantly focus on those positive changes, both enriching and even grounding.

Her travel poems are intriguing, constructed less in a matter of going away than specifically returning home to a foreign soil and grounding herself in family and half-familiar settings. I’m also fascinated by the lyric rush of her prose poems, such as the four-paragraph “PYGMALION THE COLONIST,” that begins:

he spoke to her in riddles and departed to China, determined to open an ancient world and save it from plunder. they sat at a bar as he tipped the waitress, who was all eyeballs and gunnel legs, leaving him a number and a glance as he said, kid, adios, I bid you farewell, stood then left, headed east to her old country where he sent weekend Skype updates: Asia is really messed up, I need to help these people, your country is a tyrant among kings, I am an expert on Asian women. meanwhile his angry ex-wife sent him Sufi love poems and threats of violence as he paraded himself like a pageant queen through a country filled with ghosts.

Toronto poet Lindsay Cahill’s second chapbook is BORG EMOJI: robot sleep studies (a third, The Movement of the Triangle, also appears this year, from Kalmalka Press) is an intriguing and playful collection of very short pieces composed as both visual and soundscape, including pieces composed of five couplets of “o m g / z z z,” and quick phrases such as “nephology = the study of clouds” and “the ponderous rhythms of a mechanical monster [.]” Cahill writes out robot/machine poetry as something short, incredibly precise and even a bit temporal, existing quickly and then not at all. There really is something impermanent in the way her robot/narrator/voice attempts to speak, articulating a kind of semi-coherent and almost desperate jumble, before finally collapsing. Does her robot in fact fall into sleep, or is sleep the state in which she, poet, becomes machine? She writes, in the poem “ECOLOGY WITHOUT NATURE: 000”: