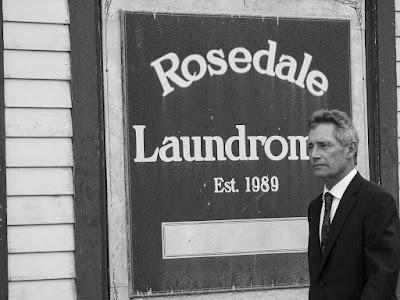 Martin West was born in Victoria and spent his youth working and living in the Canadian west. He has been published in magazines across the nation, twice in the Journey Prize Anthology as well as Best Canadian Stories. His first collection, Cretacea was published in 2016 and received the gold IPPY award. His novel Long Ride Yellow arrived in the fall of 2017 from Anvil Press.

1 - How did your first book change your life? How does your most recent work compare to your previous? How does it feel different?
My hand writing changed. Throughout all of my unpublished and professional life, I printed back hand. Probably some sort of neurosis. After the first book came out, I started writing forehand like everyone else. It really is a lot easier. As far as later works is concerned, they have gotten longer. Could be a good thing, might be bad.

2 - How did you come to fiction first, as opposed to, say, poetry or non-fiction?
Fiction came to me. My grade school disciplinary record shows as much. I had been banished to the back row with a classmate who ate erasers and the box arrived. Don’t do this. Do not open that box, a voice said to me. No such luck.

3 - How long does it take to start any particular writing project? Does your writing initially come quickly, or is it a slow process? Do first drafts appear looking close to their final shape, or does your work come out of copious notes?
Decades. Eons. All of the past. Anything that has hurt for years. Then finally the story erupts, the first draft spews out and I spend the next fifty months cleaning the mess up off the floor.

4 - Where does work of prose usually begin for you? Are you an author of short pieces that end up combining into a larger project, or are you working on a "book" from the very beginning?
In conflict. In the paradox of eroticism, patriotism and pantheism-- or whatever the human place in the cosmos is now called. If our passions are controllable, then they’re not worth having. Everything begins there.

5 - Are public readings part of or counter to your creative process? Are you the sort of writer who enjoys doing readings?
The last time I did a reading my publisher suggested beta-blockers, so that pretty much sums up the situation.

6 - Do you have any theoretical concerns behind your writing? What kinds of questions are you trying to answer with your work? What do you even think the current questions are?
Gravity. Mass. Angle of attack and self-censorship. Getting the reader from one page to the last without them realizing they are as perturbed as the author.

7 – What do you see the current role of the writer being in larger culture? Does s/he even have one? What do you think the role of the writer should be?
To write great novels. The novel itself defines the known from unknown, the living from the dead. Anything else is a distraction, a weakness and probably a lie.

8 - Do you find the process of working with an outside editor difficult or essential (or both)?
I’ve always got along very well with my outside editors. It’s the inside editor I have an issue with.

9 - What is the best piece of advice you've heard (not necessarily given to you directly)?
Don’t. Try something else. Run away. Get a day job. The armed forces are apparently hiring. But nobody listens to that. Tell the truth. There’s nothing but the truth. You’ll be a fool, but in the end the truth is all the writer has.

10 - How easy has it been for you to move between genres (short stories to the novel)? What do you see as the appeal?
Part of the Canadian condition is the right of passage through short stories so many of us were conscripted through that route to get novels published. Moi aussi.

11 - What kind of writing routine do you tend to keep, or do you even have one? How does a typical day (for you) begin?
The first draft is like showing up for parade: plan large chunks of time off. Get up sober. Go to the office first thing. Dress for the occasion. Know always there is someone on the other side of the desk listening to every word and perfectly willing to call you a liar. Write all day. Repeat.

12&14 - When your writing gets stalled, where do you turn or return for (for lack of a better word) inspiration? (David W. McFadden once said that books come from books, but are there any other forms that influence your work, whether nature, music, science or visual art?)
White frost on black trees. Women in latex. Liquor. The issue of Schrödinger's cat and modernist painting. If the story isn’t coming out like a rocket ship, then do something else. There’s no point staring at a blank page.

13 - What fragrance reminds you of home?
Cedar.

15 - What other writers or writings are important for your work, or simply your life outside of your work?
Given my vintage, I grew up with intense dislike for the PC curriculum in Canadian lit classes and was lured towards the deviant crowd instead.

16 - What would you like to do that you haven't yet done?
Own my own boat. Cure insomnia. Give up guilt.

17 & 18- What made you write, as opposed to doing something else? If you could pick any other occupation to attempt, what would it be? Or, alternately, what do you think you would have ended up doing had you not been a writer?
Probably a failed intelligence officer. The writer writes because he has too. There is no choice. To not write would lead to insanity, suicide or both. Fortunately, along the way I’ve had good jobs which aren’t usually associated with the writing life. The strategy paid off. Without those experiences I would never have written anything worthwhile. As ugly, duplicitous and derelict as the human condition may be, living in the beast’s gut is the only way to see its face.

20 - What are you currently working on?
1981 Recession Vancouver. B&E artistry. Professional domination in halcyon days. Folks who believe their parents are insects. Pretty standard fare for this strange nation.