Megan Levad, What Have I To Say To You

THE HEAT I FEEL I FEEL
all the way

over there in my body

I watch while
eighteen hundred parents

stand for the Hallelujah
chorus in a college gymnasium

From here I see it
my body

San Francisco poet and librettist Megan Levad’s second full-length poetry collection, following Why We Live in the Dark Ages (Portland OR: Tavern Books, 2015), is What Have I To Say To You (Tavern Books, 2017). Composed as a book-length lyric suite, Levad’s poems explore the intimate at an extremely high speed, moving through the imagination and the body with great detail and dexterity. As she writes: “IN THAT SCENARIO / I think I would // save your mother // you would get / the fifty-fifty // I would drown // the most romantic / way to go // But I might be wrong  […].” Levad’s first person accumulation of pieces read as though it could be a letter composed at the end of a relationship or affair, or an interior monologue on what might have gone wrong, ending up as a curious blending of both that doesn’t necessarily require to be read in order to comprehend.

I am a stadium
filled with screaming fans

I have no one to talk to

I am Amelia Earhart
piloting the Kittyhawk

with the Lindbergh baby
strapped to my chest

I am first in everything

I am a career violinist

The bruise on my neck
I did to myself 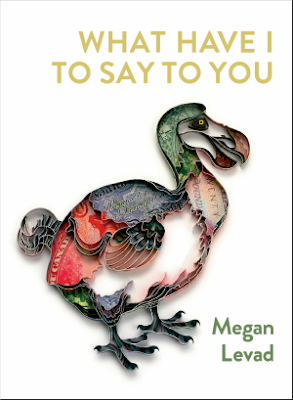 Levad’s epistolary accumulations are intriguing, and move from confrontation to meditation, interior monologue to direct speech. The “you” of her title, in a certain way, becomes superfluous, or at least secondary, making the remainder of her title a question she works with great attention and detail to answer. What Have I To Say To You might suggest a direct response to another, but it feels just as much a kind of intricate, lyric character study composed as monologue. Just who is the “I” that is speaking, and what has she to say, exactly, to anyone?

WHEN A COMPASS
is broken

it can be replaced

needle, cork, shallow dish
is all it takes

the compass is broken

That part takes decades
of wandering in the desert