Kate Greenstreet, The End of Something

It takes something like 345 squirts to get a gallon of milk. You get three or four gallons a milking, depends on the cow. She needs to be milked twice a day, morning and night, no matter what.

When a cow is moved to a different field, the milk changes flavor. When they shit, it falls from a distance and, in a cold barn, steam rises off it. You can see the breath come and go through their immense nostrils.

If you’re a child when you see a calf born, you always know there’s a place as big as you inside a cow. (“12. LIVES OF THE SAINTS”)

I’ve seen American poet Kate Greenstreet’s latest poetry title, The End of Something (Boise ID: Ahsahta Press, 2017), on at least one best of 2017 list, but am only seeing such now (otherwise I might have included it in my own). The End of Something wraps up her quartet of poetry collections – case sensitive (2006), The Last 4 Things (2009) and Young Tambling (2013) [see my review of such here], also with Ahsahta – existing as both closure and a further opening, as she discussed in a recent interview posted at Touch the Donkey:

The new manuscript is actually the center of a bigger project that includes art, video, and audio experiments, based on The End of Something and offering alternate ways into it. That will all be accessible from a site (theendofsomething.com), which will go up when the book is published.

After I finished case sensitive, when I was writing The Last 4 Things and then Young Tambling, I didn’t think of the books as parts of a set or some kind of continuing inquiry. But while working on this one, I began to realize that my books are interconnected, and to feel I was putting down a fourth corner to define a formerly open-ended space.

Although I see The End of Something as a conclusion, I also like the idea that a reader could start there and go to case sensitive next. Or to either of the others. The books seem to belong to each other in a new way, so that any one of them might be the beginning or the end of a cycle that now feels complete. 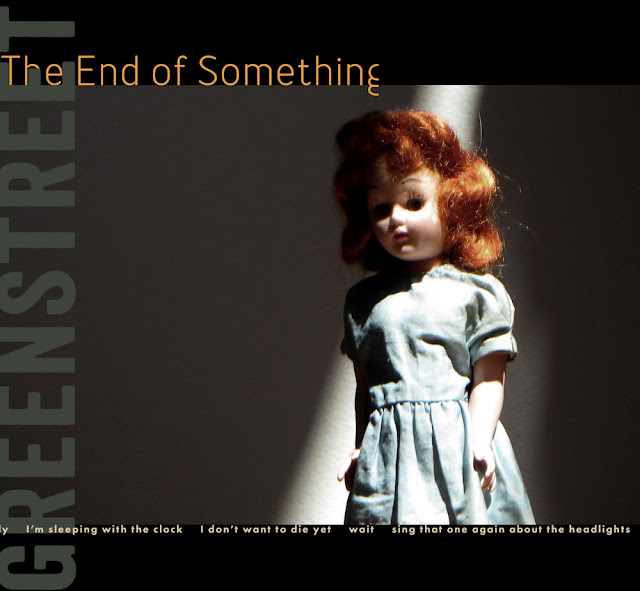 There is something remarkable in the collage effect of Greenstreet’s meditative bursts and matter of fact lyrics, one that concurrently holds a series of incredibly precise specificity and floating generalizations, with neither direction contradicting the other. The structure of her poems allow for anything and everything to be included, all while managing a narrative through-line, there enough to follow, but one that isn’t essential to engaging this work. Questions such as “Who is Mike?” or “Why would you let a dog eat pizza?” become superfluous, and there is something glorious about knowing that her work can be read in any order, whether as her quartet of books-to-date or even within each collection, opening any page at random to simply begin, without losing out on any element of what her work is doing. One might say that her quartet is less a sequence of four poetry collections than a single work, expanding outward as it moves beyond its borders, while refusing a single linearity.

Greenstreet’s poetry has elements of both the magpie and the meditative lyric, exploring memoir, memory and whatever scrap might catch her eye, able to weave even the most disparate element into the fabric of this expansive work. I like the idea of her quartet as a sequence of works engaged in “continuing inquiry,” and invite comparisons to the work of other essay-poets, including Lisa Robertson, Phil Hall and Erín Moure, or even non-fiction works such as Sarah Manguso’s 300 Arguments (Graywolf Press, 2016) [see my review of such here], Maggie Nelson’s Bluets (Wave Books, 2009) [see my review of such here] or Elisa Gabbert’s The Self Unstable (Black Ocean, 2013) [see my review of such here]. Given the collage-element of Greenstreet’s work has expanded to include image and short film, unable to contain the multitudes of her engagement within the confines of the poetry book, I’m curious to see where her work might go next; and might her next work extend what she has accomplish here, or move entirely beyond it?

I was back on the farm. I felt though that I was not really there but remembering, because new elements were present. I saw some sheep cut in half but they were hollow. I swept out a tiny building that didn’t used to be there, which led to a system of tunnels underneath the ground I just wanted to be alone in the tiny place I’d swept, but I could hear people coming up through the tunnels. I seemed to have nowhere else to go, and then, miraculously, I had the thought “If this is remembering, I could try to forget,” and with that I woke up. (“64. WHAT IT MEANS TO BE A STRANGER”)