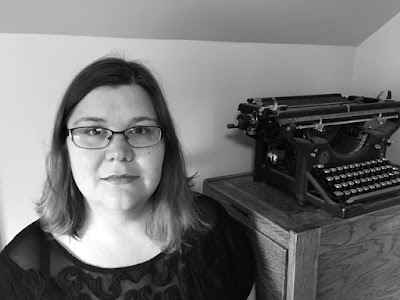 Annette Lapointe was born on the coldest day of 1978 in Saskatoon. She lived in rural Saskatchewan, Quebec City, St John’s, Saskatoon, Winnipeg, and South Korea before migrating to Grande Prairie, AB, where it’s cold most of the time but the wildlife comes right up to the door and asks to come in.  She has published two award-winning novels: Stolen (2006) and Whitetail Shooting Gallery (2012).  Her latest book is the short story collection You Are Not Needed Now, published by Anvil Press in 2017.

Lapointe completed her PhD in Contemporary Literature in 2010.  She now teaches literature and creative writing at Grande Prairie Regional College and edits The Waggle magazine.

1 - How did your first book change your life? How does your most recent work compare to your previous? How does it feel different?
My first book took me by surprise!  I had been “trying” to be a writer for a number of years, but I had no real expectation that the manuscript would be published, let alone that it would receive the positive critical reception that it did.  That transition from “trying” to “being” was disorienting, and in some ways, I’m still surprised by it!

You Are Not Needed Now is my third published book.  I think what I’m most delighted by this time is that people are finding the stories funny.  (I was always going for funny, but my sense of humour is dark, and this is the first time most people have noticed.)  I’ve also transitioned in the meantime from being a student to being a teacher, so my students’ reaction to my writing is fun: their startled looks, the bit of “really?”, and then laughter.  I love that.

2 - How did you come to fiction first, as opposed to, say, poetry or non-fiction?
I was an early reader, but I remember that when I was about five, my godfather gave me a Dick-and-Jane reader, and my dad sat down with me and read through it, and at the end informed me, “There, you’ve learned to read now.”  And as far as I was concerned, that was it: I could read.  I was a voracious reader, and nearly everything I read was fiction.  Then, when I was about eleven, a friend said she wanted to be a writer, so I said that I did too.  My grandfather heard me say that, and he bought me a little portable typewriter at a garage sale.  He formally presented it to me, “For your writing.”  So then I was all set!  I wrote absurdist stories about the people I went to school with, and was shocked when my classmates wanted to read the stories, or be in the next one.  I read all the time, so the writing seemed like a natural outgrowth, but the fact that other people might be interested, that was a surprise.

3 - How long does it take to start any particular writing project? Does your writing initially come quickly, or is it a slow process? Do first drafts appear looking close to their final shape, or does your work come out of copious notes?
I don’t come to anything I’ve written so far thinking, “This will be a book.”  That would feel like jinxing it.  I write in fits and starts, sidling up to the project and trying not to startle it, and sometimes the idea runs away and I have to leave it alone for a week or a year, until it calms down and returns.  In the meantime, I work on other projects, or just read, or hope that a different book will pop up and be easier to catch.

Once I’ve “caught” an idea, the writing gets easier.  I make notes and don’t always follow them, write thirty pages and throw them away, but by then I’m sure that the project will be finished, that I just have to keep working.  All of that is to get to a first draft.  Then I have to walk away, forget what I had in mind, then come back and write it again, more coherently.  The early versions often don’t resemble the finished product.

4 - Where does a work of prose usually begin for you? Are you an author of short pieces that end up combining into a larger project, or are you working on a "book" from the very beginning?
The process has been different with this book than my previous ones, because it’s short fiction.  I’ve written short stories since I was fairly young, but I treated each one as an autonomous entity.  When I decided that I wanted to link these pieces into a collection, I revised them to develop the thematic collections, so that (I hoped) they’d hold together.

5 - Are public readings part of or counter to your creative process? Are you the sort of writer who enjoys doing readings?
Though I don’t do many readings, I enjoy them – I’m utterly doing it for attention!  Reading gives me a chance, with newer material, to test how people will react, but it’s also terrifying, because if they don’t like the piece, I’m fairly sure that the ground will swallow me up.

6 - Do you have any theoretical concerns behind your writing? What kinds of questions are you trying to answer with your work? What do you even think the current questions are?
I have lots of theories, but I’m not sure how directly they’re related to my writing.  The closest ongoing question I have is just, “What does it feel like to be human?”

7 – What do you see the current role of the writer being in larger culture? Does s/he even have one? What do you think the role of the writer should be?
I think the basic purpose of writing is to keep us entertained so that we don’t chew off our own arms.  If writers work well, we should be able to do something more useful: tell people what it feels like to be human in this particular place and moment.

8 - Do you find the process of working with an outside editor difficult or essential (or both)?
It’s always uncomfortable, because the editor stands at the threshold of taking my private work public, but I need that second set of eyes, and the hand wielding the excision knife.

9 - What is the best piece of advice you've heard (not necessarily given to you directly)?
About writing: “When writing a first draft, I have to remind myself constantly that I'm only shoveling sand into a box so later I can build castles.” Shannon Hale

About anything: “If you can’t make your own neurotransmitters, store-bought is fine.”

10 - How easy has it been for you to move between genres (novel to short stories)? What do you see as the appeal?
I’ve always written short stories, and what’s been crucial is to understand that every story has its own length, and I won’t necessarily know how long that is until I’ve written it.  Coming from writing novels, I’ve discovered how much I love long short stories, which I couldn’t imagine how to write when I was younger: I need to write it like a novel, then carve away everything but the bones, and find out what’s left.

11 - What kind of writing routine do you tend to keep, or do you even have one? How does a typical day (for you) begin?
I’d love to claim that I write every day, but I don’t.  I read every day, and I write sometimes.  When I’m in writing mode, I write every day.  The deal with myself, the one I make to finish projects, is that I have to write one hundred words a day.  They don’t have to be good, and I can throw them away tomorrow, but I have to write them.  If I write three thousand words one day, the next day, I have to write a hundred words.  Everything else is a bonus, but not one I can use to bargain with myself later.

12 - When your writing gets stalled, where do you turn or return for (for lack of a better word) inspiration?
When I’m stuck, I go back to reading.  Pieces of daily life get incorporated when I write, but first I have to remember how to write, and I do that by reading.

13 - What fragrance reminds you of home?
Dry grass and wood smoke.

14 - David W. McFadden once said that books come from books, but are there any other forms that influence your work, whether nature, music, science or visual art?
I’m heavily influenced by the visual artists in my family (my father, Paul Lapointe, and my aunt, Carole Itter).  They both have this wonderful vision, this gift for pulling together visions of the world into objects, and I’m enormously lucky that I can talk to them, and go back to study their work, for new insights.

15 - What other writers or writings are important for your work, or simply your life outside of your work?
There are so many, but the ones who got me started, and gave me the language to write, are Margaret Atwood, William Gibson, Michael Ondaatje, and Larry McMurtry.  I read all of them in my teens (McMurtry early, Ondaatje much later).

16 - What would you like to do that you haven't yet done?
I haven’t been to Europe yet, but mostly I want to write a lot of books and live forever.

17 - If you could pick any other occupation to attempt, what would it be? Or, alternately, what do you think you would have ended up doing had you not been a writer?
I have a second full career as an English professor, and I think that’s valuable, but I don’t think there’s a version of me that doesn’t write.  I admire other professions, but none of them seem to exist inside of me.

18 - What made you write, as opposed to doing something else?
I always wanted to create, but I learned early on, to my frustration, that I didn’t have the visual facility of other family members.  I could express what I meant with words, whereas the translation to the visual wasn’t something I could achieve.

19 - What was the last great book you read? What was the last great film?
I’m currently absorbed in Jeff Vandermeer’s Area X: Southern Reach Trilogy and Kaitlyn Greenidge’s We Love You, Charlie Freeman.  I’ve only watched a couple of movies late, because I’m catching up on my TV: Star Trek: Discovery, Stranger Things, Alias Grace.

20 - What are you currently working on?
Some short stories, but not ones I currently envision as parts of a book, and the third draft of a novel called The Cure.