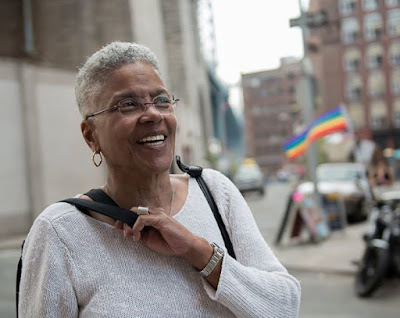 Cheryl Clarke is the author of five books of poetry, the most recent of which is By My Precise Haircut (2016); the critical study, After Mecca: Women Poets and the Black Arts Movement (2005), and her collected works The Days of Good Looks: Prose and Poetry 1980-2005 (2006). With Steven G. Fulllwood, she co-edited To Be Left with the Body (2008), one of a series of art and literary publications for men of color having sex with men produced by AIDS Project/LA and GMHC. Her writing appeared in the iconic This Bridge Called My Back: Writings by Radical Women of Color (eds. Anzaldua and Moraga, 1982) and Home Girls: A Black Feminist Anthology (ed. Smith, 1984). She was an editor of Conditions (1981-1990), a feminist magazine of writing with an emphasis on writing by lesbians, founded in 1977. For five years, she has served as one of the organizers of the annual Festival of Women Writers in Hobart, N.Y., the Book Village of the Catskills.

1 - How did your first book change your life? How does your most recent work compare to your previous? How does it feel different?
As I self-published my first book of poetry, it made me understand how a writer can take control of her production--from writing the poetry, to how it looks in print, use of graphics, promotion, everything. But promotion for me is always the hardest. My most recent work, BY MY PRECISE HAIRCUT, uses the skills I had developed, in terms of voice, narrative strategies, political awareness, lesbianism, from my first book, NARRATIVES: POEMS IN THE TRADITION OF BLACK WOMEN (1982)

2 - How did you come to poetry first, as opposed to, say, fiction or non-fiction?
I was inspired by the work poetry was doing during the Black Arts Movement and then decided it would be my form. I don't have the patience for fiction. I wrote two short stories in my life. One is in HOME GIRLS: A BLACK FEMINIST ANTHOLOGY and the other is in a feminist journal, 13th MOON, then edited by poet Marilyn Hacker.

3 - How long does it take to start any particular writing project? Does your writing initially come quickly, or is it a slow process? Do first drafts appear looking close to their final shape, or dos your work come out of copious notes?
Very rarely are first drafts like what they end up to be. I believe in revision--sometimes too much so that I make the poems too spare. No copious notes for poetry. Copious revisions. My last volume of poetry before BY MY PRECISE HAIRCUT in 2016 was EXPERIMENTAL LOVE in 1993. So, I had a lot of time to write and revise. I ended up with 27 poems. Certainly, I wrote more than 27 poems over those 23 years. I approach essay writing similarly to poetry. I think the essay and the poem are similar for me. I try for spareness in the essay. Lots of revision. But I need more practice with it. I wanted to write a book of essays, throwing in some public talks and other prose pieces, but find I don't have the concentration--or maybe it is patience--to put such a book together. Dare I say, I would like to write something like Audre Lorde's SISTER OUTSIDER: SPEECHES AND ESSAYS?

4 - Where does a poem usually begin for you? Are you an author of short pieces that end up combining into a larger project, or are you working on a "book" from the very beginning?
I work on a book from the very ending of the last collection. Audre Lorde taught me that. When I published my first book, NARRATIVES: POEMS IN THE TRADITION OF BLACK WOMEN, she said, "Now Cheryl, you have to be working on your next book. So I see the book from the beginning, because at this point in my life, I don't do a lot of submitting, never have really. I am building a manuscript now, no title yet, and it will probably be a continuation of the sensibility of BY MY PRECISE HAIRCUT.

6 - Do you have any theoretical concerns behind your writing? What kinds of questions are you trying to answer with your work? What do you even think the current questions are?
The current questions have to do with the role of literature in life and politics--as always--but especially now in the era of Trump/Tramp. The roles of women, especially feminist women, in leading us out of this current political morass. But maybe that’s too heavy a load for women alone. I don't know if I am trying to answer any questions or just trying to raise questions with my poetry.

7 – What do you see the current role of the writer being in larger culture? Does s/he even have one? What do you think the role of the writer should be?
I think the writer must write—that is her/his responsibility. Politics imbues my role as poet. Who has the power and who suffers from the power of others? I see poetry as instrumental to the way I criticize and protest the status quo, the raging inequalities in our communities, and, of course, bringing to light the ravages of sexism, racism, homophobia.

8 - Do you find the process of working with an outside editor difficult or essential (or both)?
I enjoy being edited. If I am publishing a book, I feel an editor is essential. I also enjoy editing and do it very well.

9 - What is the best piece of advice you've heard (not necessarily given to you directly)?
I think I said it above. When you finish your book, begin planning your next.

10 - How easy has it been for you to move between genres (poetry to critical prose)? What do you see as the appeal?
I enjoy writing literary criticism. I enjoy reading it. I wish I could write another book of literary criticism, besides AFTER MECCA: WOMEN POETS AND THE BLACK ARTS MOVEMENT. If I were to write another book of criticism, it would be on the work of contemporary black queer women poets and the role of independent presses in the advancing of their work. But I don’t know if I have it in me.

11 - What kind of writing routine do you tend to keep, or do you even have one? How does a typical day (for you) begin?
The only writing I do every day is in my journal at night before I go to bed. I have been keeping one since 1977. If I am under a deadline, I will write routinely. I am revising a literary piece now for an anthology on black civil rights and LGBT rights, from the conference, “Whose Beloved Community?” which was held at Emory University in 2015. So, I’m working on the piece pretty steadily. My writing routine is tied to publication or presentation, but I’m committed to publication. So, I prepare any talk as if I am writing an article for publication.

12 - When your writing gets stalled, where do you turn or return for (for lack of a better word) inspiration?
I don’t know that it gets stalled; or if it does, I just wait. Toni Morrison says you shouldn’t write through a “block.” If I am not writing, I don’t get worried. I guess because I never depended on my writing for a living. But basically I just wait. And if I have to write a piece for a deadline, I just work on it. Sometimes, I can’t distinguish between my own laziness and getting stalled.

13 - What fragrance reminds you of home?
The aroma of fried onions. And I fry onions almost every day.

14 - David W. McFadden once said that books come from books, but are there any other forms that influence your work, whether nature, music, science or visual art?
Music is a big influence on the poetry, especially R&B. I think about the lyrics, the pathos, and the joy of R&B In fact I have a tribute to R&B in BY MY PRECISE HAIRCUT called “Songs of Longing.” I agree with Baraka that the songs of unrequited love in black R&B are the pain of social rejection. I attended the “Black Portraiture” Conference in Jo’burg, South Africa in 2016, where I delivered a paper on Natasha Tretheway’s BELLOCQ’s OPHELIA and the visual art of Zanele Muholi and Kara Walker. I tried to do too much, and ran out of time. So, I am beginning to get interested in visual art as an influence. But the Conference was life-changing for me to be around black visuality and visual artists.

15 - What other writers or writings are important for your work, or simply your life outside of your work?
James Baldwin’s ANOTHER COUNTRY was the first book to give me courage. Alice Walker’s IN LOVE AND TROUBLE helped me write my first book of poetry, Toni Morrison’s BELOVED, JAZZ, and A MERCY, all of Audre Lorde’s poetry, June Jordan’s essays, especially SOME OF US DID NOT DIE and the latest collection of her work WE’RE ON and her complete poems DIRECTED BY DESIRE; and I couldn’t live without ntozake shange and FOR COLORED GIRLS WHO HAVE CONSIDERED SUICIDE WHEN THE RAINBOW IS ENUFF.

I guess the whole literary infrastructure of African American culture.

17 - If you could pick any other occupation to attempt, what would it be? Or, alternately, what do you think you would have ended up doing had you not been a writer?
?

18 - What made you write, as opposed to doing something else?
I told you above. The Black Arts Movement and the literary tradition of African Americans. I wanted/want to make a contribution.

20 - What are you currently working on?
With my partner Barbara Balliet and my sister, Breena Clarke, I am a co-organizer of the Hobart Book Village Festival of Women Writers, which occurs every year in Hobart, N.Y. Check out our website www.hobartfestivalofwomenwriters.com or like us on Facebook. We work on the festival all year round with a team of committed volunteers. I do the grant writing. The festival will celebrate its sixth year on on September 7, 8, 9, 2018.

I am working on a new book of poetry, as I said above, and revising an article for an anthology, as I also said above. I hope I do not have to wait another 23 years to publish my poetry again.

Thanks for this opportunity.