The Beauty of Furs: A Site Glossary

Later you realize it is a poem about being born, the smell of the fur is your mother birthing you & your hair is wet not slicked back but from the wetness of womb, the fur coat the hugest fur of your mother the cunt of your mother from which you have emerged & you cower in this smell. The fur coat the sex of women reduced to decoration, & the womb the place of birth becomes the church in which you are standing, the womb reduced to decoration, where women are decoration, where the failure of decoration is the humiliation of women, to wear these coats, these emblems of their own bodies, in church on Sunday, children beside them. The church now the place of birth & rebirth, they say redemption, everyone knows what this signifies & the mother is trying to pay attention, all the mothers, my mother, & we are children, I am children, a child with wet hair cowlick slicked down perfect, no humiliation, the site still charged with the smell of the river, the coat smell of the river, smell of the birth canal, caught in the drown-set is to be stopped from being born, is to be clenched in the water unable to breathe or see the night sky, the coyohts calling me upward, as if in these circumstances, so small beside my mother, I could be born now, but cannot, can I, because we are inside this hugest womb which has already denied us, in which we are decoration, in which men wear dresses & do the cooking, & the slicked hair is not the wet hair of birth but the hair of decoration, as if I could be born now, I am born, my snout warm smelling the wet earth of my mother’s fur (WSW (West South West))

I’m amazed and thrilled to finally see a copy of Planetary Noise: Selected Poetry of Erín Moure, edited by poet and critic Shannon Maguire (Middletown CT: Wesleyan, 2017). Planetary Noise manages the seemingly impossible task of articulating and selecting from Moure’s sixteen trade poetry collections, as well as from a collaborative work and a selection of translations, to create a remarkably coherent whole. Editor Shannon Maguire has done an incredibly thorough job of putting together an impressive volume of Moure’s work, along with an equally impressive critical introduction to the context of Moure and her expansive, playful and voluminous writing/translation practice(s), including an array of details that add enormous amounts of information to Moure’s ongoing work. Moure’s early engagements with the ‘work poets’ of Vancouver—including Tom Wayman, Zoë Landale, Kate Braid, Phil Hall, Calvin Wharton and others—for example, is well known, but did you also know that she was briefly a student of Pat Lowther? Her introduction illuminates, as well as shines. As Maguire’s essay, “Erín Moure: Poetry as Planetary Noise,” opens:

Erín Moure is one of English North America’s most prolific and daring contemporary poets. Her work in and among languages has altered the conditions of possibility for poets of several generations—myself included. With her ear tilted close to the noise floor, Moure listens for patterns arising from contemporary Englishes and from “minor” languages such as Galician, and shifts language structures away from commerce so as to hear other possibilities, other tensions. In so doing, subjectivity, justice, and politics can be considered anew. Moure’s work is transnational in scope; her lines transit from one articulated locality to arrive at or include another. Her poems attend, in various registers, to bodily capacities and fragilities as much as to the operations of power. Moure’s poetry travels joyously through noise, and sometimes even as noise, via various channels and contexts, refusing absorption. For Moure, “Poetry is a limit case of language; it’s language brought to its limits (which are usually in our own heads) where its workings are strained and its sinews are visible, and where its relationship with bodies and time and space can crack open” (Montreal Review of Books). Facing a Moure poem as a reader, I appreciate the disquieting rhythms, sudden symmetries, outlandish puns, and general pleasure caused by roiling syntax and audacious neologisms. Even without knowing the majority of the languages that Moure draws on, I am compelled by the sounds and echoes that her poems amplify, and the patterns of letters and words that they make visible on the page. 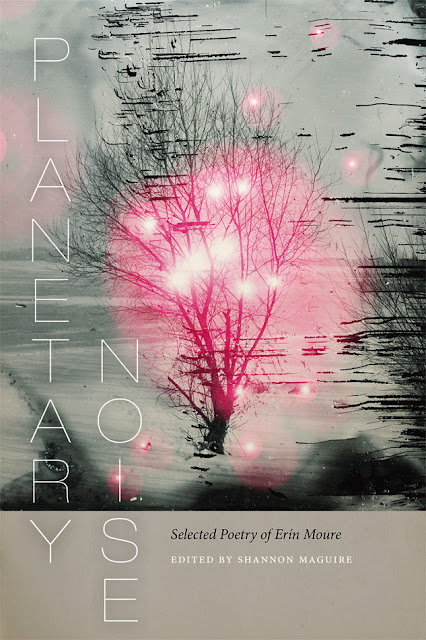 Not that this is the first ‘selected poems’ volume Moure’s work has seen; there was The Green Word: Selected Poems 1973-1992 (Toronto ON: Oxford University Press, 1994), a volume produced as part of their short-lived series of selected poems. The Green Word had its appeals, but in the end, the forum was far too thin to contain the multitudes of Moure’s writing, and simply felt random in its selection, and even comprehension. One of the real gifts of Planetary Noise is in how Maguire seems to understand the multiple arcs of Moure’s writing, evidenced by how she arranges the sections, understanding how, with the publication of her WSW (West South West) in 1989, Moure’s books began to group; it was another decade or so before readers began to understand how Moure was beginning to compose trilogies of poetry titles, but the comprehension of her work opens the realization of how her books really began to interact with each other in serious and sustained ways. Maguire groups the collection as: “EARLY SIGNALS (First Cycle): Empire, York Street (1979), Wanted Alive (1983), Domestic Fuel (1985) and Furious (1988); “CIVIC SIGNALS (A Noise Cycle)”: WSW (West South West) (1989) and Sheepish Beauty, Civilian Love (1992); “NOISE RISES (Citizen Trilogy + Pillage Laud)”: Search Procedures (1996), A Frame of The Book / The Frame of A Book (1999), O Cidadán (2002) and Pillage Laud (1999, 2011); “ATURUXOS CALADOS (Galician Cycle)”: Little Theatres (2005) and O Cadioro (2007); “RESONANT IMPOSTERS”: Oana Avasilichioaei and Erín Moure’s Expeditions of a Chimæra (2009); “AN ABSOLUTE CLAMOROUS DIN (Ukrainian Cycle)”: OResplandor (2010), The Unmemntioable (2012) and Kapusta (2015); and “POLYRESONANCES (Transborder Noise)”; from Incession (an echolation of Chus Pato’s Secession, 2014) and “Works of Other Poets in Moure Translation,” including Chus Pato (Galicia), Andrés Ajens (Chile), Wilson Bueno (Brazil), Nicole Brossard (Québec), Emma Villazón (Bolivia), Rosalía de Castro (Galicia) and Fernando Pessoa (Portugal).

I ll never master the art of poetry. I
have these words: sadness and tears!

I m not going to put them into lines for
you. Or ask for death. Or tell you

I suffer endlessly, courting
you.

Apart from simply getting some out-of-print work back into the world, far too many volumes of ‘selected poems’ add little to nothing to the conversation of the author and their work, and can simply be skipped over if you’ve all the books the new volume selects from (I suspect this is why so many volumes include “new poems”). Volumes of selected poems without introductions to provide even the bare minimum elements of context are even less compelling (something I’ve been complaining about for years). I mention all of this to really make the point that Planetary Noise is no mere ‘selected poems’ in the traditional way (the introduction alone, for example, is worthy of stand-alone publication), and the real gift of this volume is in what Maguire and Moure have shaped together: how both editor and author have collaborated to produce a volume that can enrich even the deepest reader of Moure’s work. As well as the introduction, the nearly two hundred page volume even includes a detailed bibliography and further reading list. I don’t think it would be difficult to suggest that this is one of the most impressive volumes of ‘selected poems’ I’ve seen to date. Moure’s work is one of deep listening, and Maguire manages to hear it all. As Moure writes in the essay “Emit,” included as a beautiful post-script:

If poetry is a gesture that opens, and opens to listening, then how a poet listens is more important than who a poet “is.”